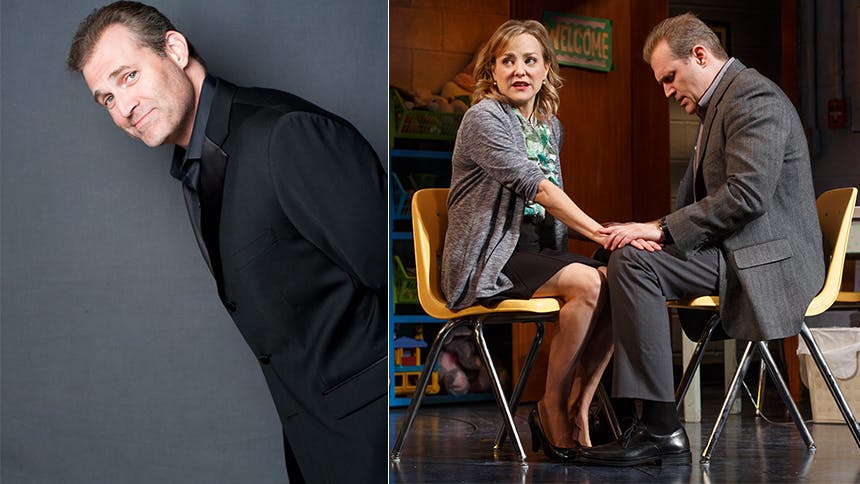 Who is Pastor Greg in Hand to God? He’s kind of shady ‘cause he’s hitting on Margery right after her husband died (and with no game whatsoever).

But then he’s also kind of a pastor badass when dealing with Timothy or the possessed sock puppet Tyrone.

Whatever you make of Pastor Greg, there’s no denying three-time Tony nominee Marc Kudisch is nailing it. Below, we talk to Kudisch about his incredible B’way career and how Hand to God made a convert of him.

In the early ‘90s, Kudisch toured as Conrad Birdie in the Tommy Tune/Ann Reinking production of Bye Bye Birdie, and then recreated the role in 1995 TV movie starring Jason Alexander and Vanessa Williams.

He made his Broadway debut as Reuben (he’s the brother that sings “One More Angel in Heaven”) in the ‘93 Joseph revival before taking on the role of Gaston in Beauty and the Beast.

And the off-Broadway credits include Noo Yawk Tawk, The Thing About Men, See What I Wanna See, The Glorious Ones, A Minister’s Wife, The Blue Flower and The Wayside Motor Inn (Drama Desk Award).

With such a healthy mix of plays and musicals, here's what Kudisch had to say about why each project is a game-changer and why he is best in a play.

I have so many game-changers, if you will. Almost every show is a game-changer, or at least it has been for me in many ways.

I would say the first game-changer was my first job in New York, Tamara: The Living Movie, because it put me on the map in New York City. Bye Bye Birdie the national tour was a massive game-changer for me because no one wanted to see me do a musical or hear me sing—I had only worked off-Broadway and had never done a musical—and it’s what lit the fire under me wanting to do music theatre. The Wild Party was a game-changer because it was a character unlike any other character that has or has ever since existed on a Broadway stage; and I was not the type for that, so I thought that really showed people that I was a character actor in a leading man’s body.

And I think Hand to God is a game-changer but only because I’m back to what I did when I first got to New York City, and everyone has forgotten because I’ve been doing musicals for so long. I think plays are what I do best. The greatest gift I have is focusing on helping to tell a story and there’s more potential for that when you’re doing a play—the book gets more respect.

The work I do as an actor is very play like, even in a musical. You think of Trevor Graydon, the stuff I sang in Millie was all character driven—that’s what made it fun. You weren’t listening to what I sounded like, you were listening to the character, and it goes for 9 to 5 as well. In Michael John’s musicals it's the same thing. I think I am a very verb driven performer, and that's how I best help with storytelling. That's why it’s nice to do a play because there’s more respect for that kind of work there; I sure hope Fun Home is going to kick the door open again.

[Hand to God] feels real and it's really f*cking funny because it’s honest. It’s not trying to be funny. You don't feel a joke being set up. It's a play that's constantly on the verb. And the joy of this is that there are so many levels on which to play, that are wildly funny and wildly not and at the same time. Who doesn't want to do that? I read it and I said, ‘This thing is crazy and unpredictable and no one has done this before. That’s where I want to go.’ I’m a bull in a china shop—as my wife constantly reminds me—and I like to play hard and smash into walls. I love being very risky on a stage. [Hand to God] is great because there are only five of us on stage and each is ready, willing and able to throw caution to the wind, but we trust each other. So you get this wonderful environment of ‘let’s go for it.’ You can’t go wrong when you have that kind of environment.

See Marc Kudisch doing what he does best in Hand to God at the Booth Theatre.