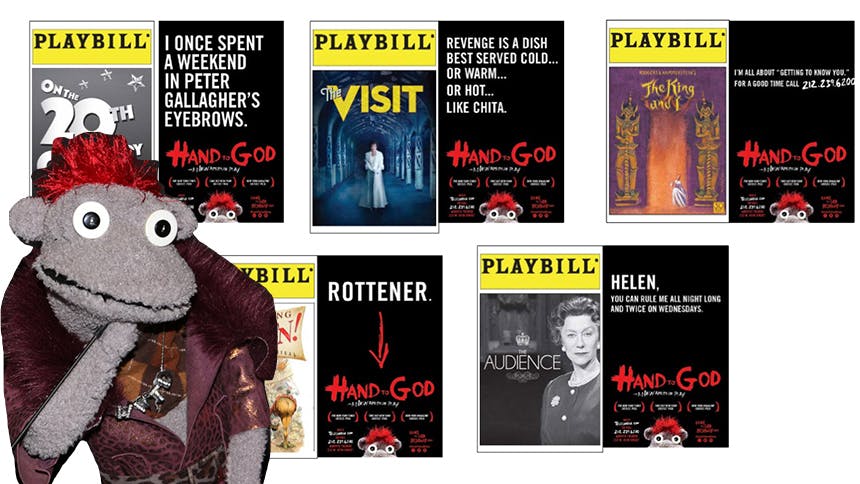 New York has a new king of comedy: an NC-17 rated felt puppet named Tyrone McHansely, and his new play Hand to God has become the can't-miss comedy of the Broadway season.


And while the play is strong enough to stand on its own, we have to tip our hat here to AKA for its brilliant campaign strategy that extends Hand to God's special brand of humor far beyond the Booth Theatre. For example, these are just some of our favorite Tweets from Tyrone's Twitter account @TyroneMcHansely.

Then there's this early ad, which is just genius considering Hand to God is this small American play in a season completely dominated by these big, bloated British transfers.

But Hand to God really turned up the heat on high (just in time for awards season) with hilarious insert ads in Playbill books across Broadway. Each personalized to the specific show, each dripping with the signature humor that makes H2G so great.

So here's the deal, if you so much as smiled at any of that, then you have to see Hand to God at the Booth Theatre. It's Broadway's most across-the-boards critically acclaimed comedy, that even NYC's stodgiest critic could concede, "the audience explodes with laughter so loud and raucous that it echoes from the Booth Theatre through Shubert Alley, all the way to Sardi’s."

Hand To God
Best Priced Tickets
Newer
Aladdin,The Wiz & Church: It's All in the Set List for Tony Winner James Monroe Iglehart
Older
Introduce Your Self(ie): 10 Questions with It Shoulda Been You Charmer Josh Grisetti