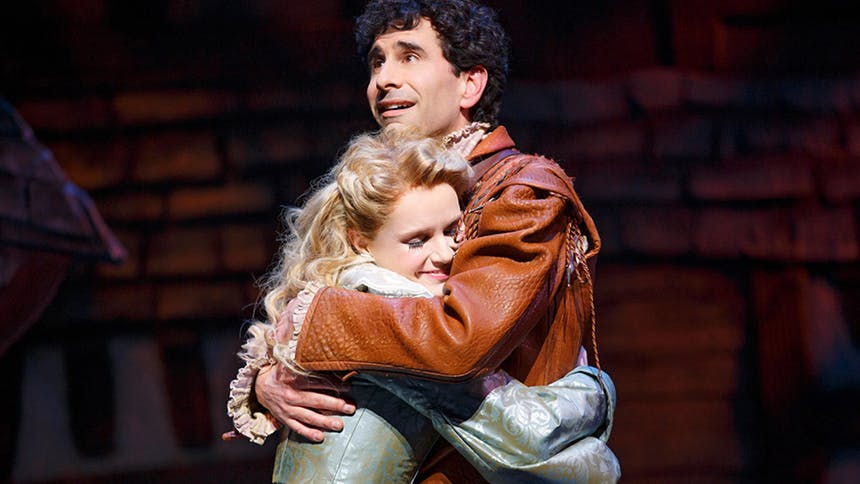 John Cariani is the heart at the center of Broadway’s hilarious new musical comedy Something Rotten!. The Tony-nominated, OCC-winning actor (Fiddler on the Roof) and playwright (Almost, Maine, Love/Sick) stars as Nigel Bottom, a sensitive, aspiring playwright in 1595 who worships Shakespeare and begins a forbidden love affair with a Puritan beauty by the name of Portia. Below, BroadwayBox talks with Cariani about why Nigel strongly connects with audiences, the inspiration for and success of Almost, Maine and his growing taste for luxury cars.

1. Nigel Bottom is such a fan of the Bard and his work; what artist gets you that excited and caught up?
Writer/philosopher Antoine de Saint Exupery. He wrote The Little Prince, one of my favorite books ever. His other writings are kind of autobiographical musings full of some of the most beautiful observations I have ever encountered. His thoughts on love kind of knock me out. Like…

"One sees clearly only with the heart. Anything essential is invisible to the eye.”

"You become responsible forever for what you have tamed.”

"Life has taught us that love does not consist in gazing at each other but in looking outward together in the same direction.”

"All of us have had the experience of a sudden joy that came when nothing in the world had forewarned us of its coming—a joy so thrilling that if it was born of misery, we remembered even the misery with tenderness.”

He’s all hope—tempered with melancholy. He accepts that pain and joy go together. And both must be experienced in order to live full life. I love it.

2. Nigel writes Portia a sonnet, what’s the most romantic thing you’ve done to woo someone?
I wrote a scene in my play Almost, Maine for my guy. Not for him—but inspired by him. We were pretty newly in love then. And now we’re older—but we still love each other. So I guess it worked.

3. With Almost, Maine being the most produced play in North American high schools, what’s the best thing you’ve treated yourself to with your Maine royalties?
My partner and I take really cool trips. We went to Joshua Tree National Park and Kings Canyon/Sequoia National park the first year I started making a little money from the play—in 2008, I think—and I paid for it all, which was new for both of us!

And we’re saving to buy a little cabin in the woods somewhere in New Hampshire near the Vermont border. (We’re from Maine and Maine is just to far from NYC, so we’ve settled on New Hampshire!)

4. Audiences root for characters like Motel and Nigel; what as an actor do you have to bring to these roles to make them so universally endearing? What’s that process?
I think the secret for me was to remember how happy—or content— guys like Motel and Nigel are—as they are.

I don’t think they expect to get much in their lives. That doesn’t mean they’re sad—they’re just not entitled. And they don’t see that as limiting. They seem to be at peace with where they are—they’re happy trying, striving.

They are enormously grateful for everything they do get. And when they get more than what they hoped and dreamed—Tzeitel, Portia—well, there’s a rush of joy.

Also—these guys never lie. And they don’t pretend to know what they don’t know. I think that’s what makes them such great characters—they embrace the great gift of not knowing. They’re very wise—because there’s great wisdom in knowing that you don’t know stuff.

5. What is the most perceived high-brow obsession or yours and the most low-brow?
High brow: My partner is really into cars. And that’s rubbing off on me. We were driving around in LA a few years ago, and I pointed out cars that I liked. The first one was a Bentley. The second one was a super high end Range Rover. And the third one was an Aston Martin. And he told me he was impressed with my taste in cars.

Low-brow: I love bowling. It’s perceived as low-brow. But I love it. I am a really good candlepin bowler (it’s a New England thing—skinny pins, small balls). And I’m a decent regular bowler. Something Rotten! is going to contend in the Broadway bowling league. That’s my bold prediction. (If there even is still a Broadway bowling league.)

Get yourself over to the St. James to see John Cariani's killer performance in Broadway's most-buzzed about spring musical, 'Something Rotten!'