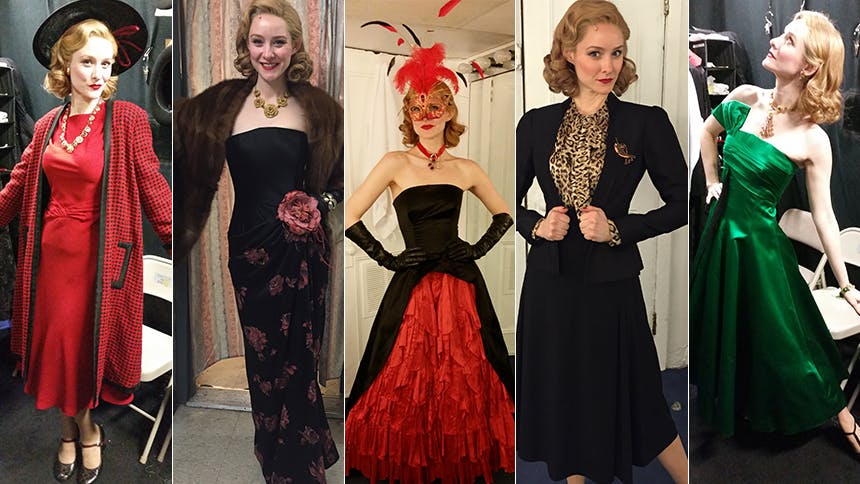 Paris is burning and it’s all because of the fiery performance by Jill Paice. The Broadway fave is a jewel in the gorgeous crown that is An American in Paris. As the ballet’s very wealthy American patron, Milo Davenport, Paice gets to show New York her strong, spirited, fierce side (ya know, since only London got to see her Scarlett O'Hara), all while rocking the most stunning Bob Crowley ensembles.

Below, Paice puts on a fashion show fit the runways of Paris as she takes us backstage at the Palace Theatre to show off these Crowley creations up close and give us a better idea of who Milo Davenport is through her timeless wardrobe.

The Hat & Gloves Kick Off 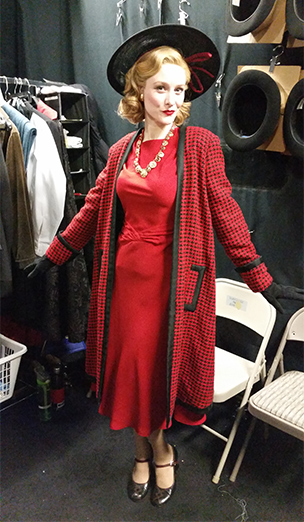 This is my first costume by Bob Crowley and it's up there as one of my favorites, mostly because it has a hat. It's a swell hat and until I put it on, I just wander around wondering what I'm doing in a theater. If you ever have to wear this hat, you should be careful when going through doors or hugging people as the hat does like to actively participate in these activities. I also like my gloves which are a soft, fuzzy suede but they do make picking things up off the ground difficult, so I try not to drop anything after the places call. 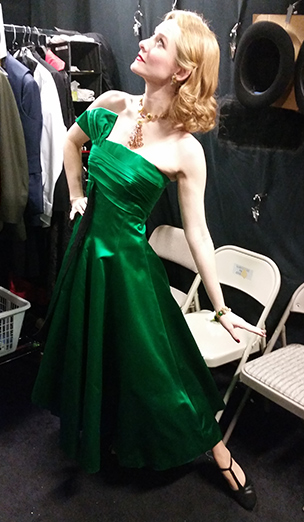 My next costume is one of the newer costumes to arrive. Between our runs in Paris and New York, Bob dreamed up this little emerald gem for the scene in the Ritz between Milo and Jerry. I feel pretty regal in this gown and I think Milo would have chosen this dress to lounge around in because she knows she'll be the center of Jerry's attention, or anyone's for that matter. I've got lovely antique jewels on which occasionally like to pop off so that I leave little unseen hazards on stage for the dancers. My LaDuca shoes here a t-strap covered in a lovely suede. They have a broken sole so that I can point my feet like a good dancer, though it has taken months of rehearsals to learn how to do this. I'm trying very hard in this photo to give you some 1950s Vogue modeling, but I think instead it looks like I'm wondering what's on the ceiling. 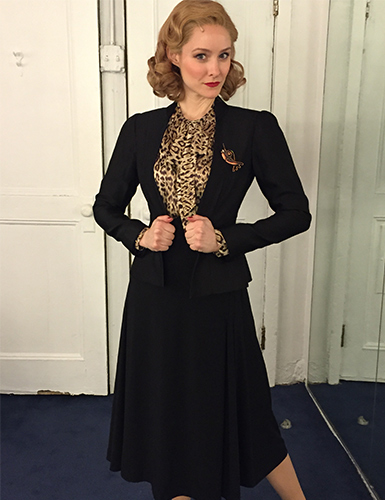 Milo's Power Suit! This costume is awesome! Milo is all business in this three piece, leopard print outfit. The blouse is silky and reflects light nicely because Milo needs people to look at her. In my original fittings, this costume came with a sexy, black pencil skirt that became impractical as I was crawling around on the floor trying to piece together Jerry's torn up artwork. So, out went the pencil skirt and in came a much fuller A-line skirt that allows me to move a bit better and travel across the Palace Theater's stage because Chris Wheeldon needs us to MOVE! There are no slow walks in An American in Paris! My favorite part of this costume is the little pin on the lapel. It's an antique and it's from Paris and some people thinks it's a fish but I think it's a bird. 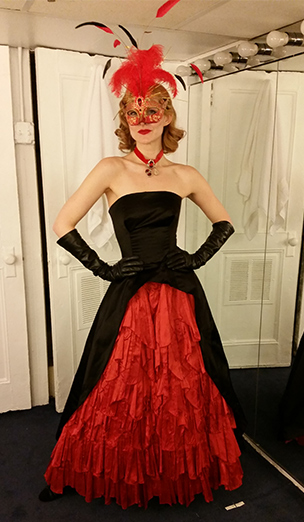 Another newbie for Broadway! Originally in Paris, Act I ended with Milo in a little black negligee waiting for Jerry in a big bed. It was a much quieter ending to the act than we have now, which is a replica of the Bal de Beaux Arts. To quote myself, "It's an annual costume ball where everyone behaves very badly and regrets it in the morning." This is probably the most dynamic moment in the show with everyone in crazy, masquerade-esque costumes. We enjoy it as a company because it's insanely fun, but also because we know in about three minutes, it will be intermission and we can sit down and check our text messages. I love this dress for many reasons. I have always enjoyed a full skirt (please see any pic from my days in Gone with the Wind...if you can find them). I also love that we are all in masks, though sometimes my sneaky mask likes to slide down my face and block my view (this is why you hope that Robbie Fairchild is your dance partner because he is a good leader, even when he's laughing at you). Mostly I love this dress because I don't have to wear my corset with it. I try to do all my breathing in this part of the show. 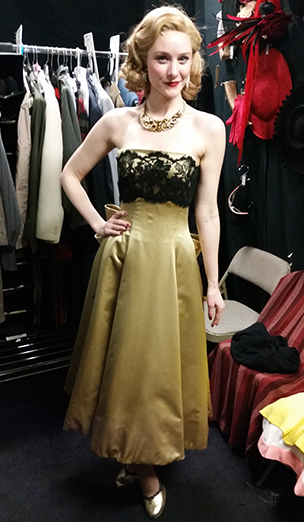 I begin Act II in this little gold number. Bob Crowley, Lynette Mauro (Associate Costume Designer) and I shared a special moment with this dress in Paris. We all got a little misty eyed. I call it my Grace Kelly dress and I call Bob Cowley a genius.

Madames et Messieurs! Mon costume favorite! Everything (everything!) is my favorite when it comes to this Katherine Hepburn moment in my life. From the turban (who doesn't love a good turban? Make yourself known!) to my snazzy, jazzy pants. And let's not forget a sensible Audrey Hepburn black turtleneck paired with Coco Chanel's many drops of pearls. I feel the most 'Milo' in this number and if I had to wear one thing for the rest of my life, I'd choose this. I am giving you a rather wide stance in this pic to show you how awesome it is to wear pants. Next time you have pants on that make you feel this awesome, you too will want to sit like this.

The Finale in Fur 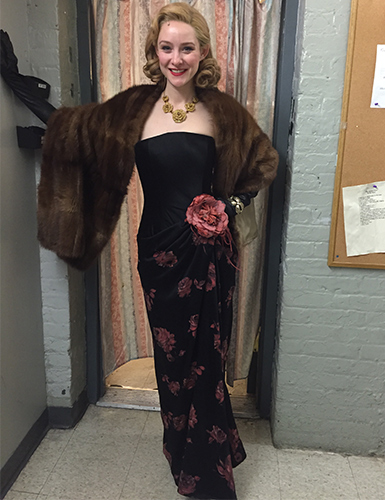 And finally, my Act II finale.
This whole number goes on in about 17 seconds, thanks to Midge Denton and Kelly Saxon. I feel sassy in this dress and fabulous which is good because Milo is movin' on to her next project once she's gotten over that Jerry fellow. Suddenly, she's got a thing for ballet dancers. I'd like to say thank you to my dresser Midge Denton who keeps me pressed and gets me out on stage feeling beautiful and Ashley Leitzel-Reichenbach for my lovely, tidy wig. Both these ladies took pictures for me and let me know when I was standing in a good light. Also, thank you Rebecca Eichenberger who took the last pic because in an earlier edition, something weird was going on with my armpit and I didn't want all you lovely readers to see that. Thanks for reading!

See Jill Paice bring the fire and music to ‘An American in Paris’ at the Palace Theatre.