Introduce Your Self(ie): 10 Questions with It Shoulda Been You Charmer Josh Grisetti 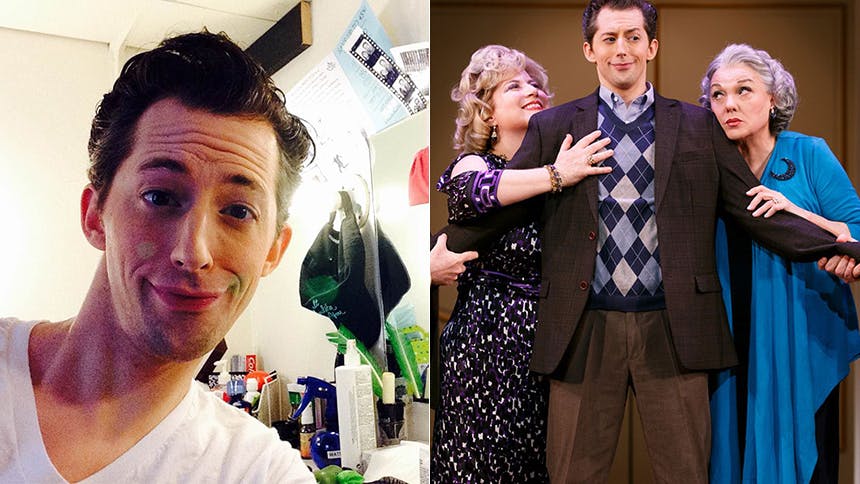 Josh Grisetti finally makes his Broadway debut in the new musical comedy It Shoulda Been You, and boy was it worth the wait! Grisetti plays Marty Kaufman, a wedding crasher who just happens to be the bride’s ex and the maid of honor’s former bestie. [Basically, he’s the title character (You) in It Shoulda Been You.]

Grisetti has won rave reviews and tons of fans for his performances in off-Broadway’s Rent, Enter Laughing and Peter and the Starcatcher, and he almost made his debut as Eugene in 2009's Broadway Bound but the revival closed in rehearsals. Don’t worry, we get into all that and more with Grisetti in the 10 questions below.

1. Character from It Shoulda Been You I’d bring as a plus-one to an actual wedding:
"Aunt Sheila"—this is a woman who's down to party, even in the bathroom, if necessary. I like that.

3. Weddings are a good place to pick up a date. Yay or nay?
Nay! No one goes to a wedding alone, so even if you meet someone fantastic, they've probably got some loser trailing them all night already.

4. Song that gets me out on the dance floor at every wedding:
Pre-alcohol: any tasteful ballad, swaying in the arms of a beautiful woman.
Post-alcohol: any comic up-tempo from the ‘70s, with whoever's around.


5. A non-negotiable aspect of my big day will be:
Trick question. I'm never getting married again.

6. Broadway Bound scene you’d all still be talking about if the show ever opened:
Me and Laurie Metcalf dancing in the living room. If you know the show, you know the reference. If not, just take my word for it. It was beautiful.

7. Rent lyric that’s so powerful I’d get it as a tattoo:
"No regrets." (In a strange sense, it's another way of saying "Quid est Veritas," which is what my actual tattoo says.)

8. The coolest thing in my apartment:
A stack of "fan mail" from various people—like Neil Simon, Hal Prince, Joe Stein, Sheryl Crow, etc. —as well as one from a little old woman in Florida whom I never met, but her's was the first fan letter I'd ever received, so I saved it.

Head over to the Brooks Atkinson Theatre and let Josh Grisetti steal your heart in ‘It Shoulda Been You’.

It Shoulda Been You
Best Priced Tickets
Newer
Tyrone McHansely Proves Hand to God Is Broadway's Funniest Show On & Off the Stage
Older
Ana Villafañe Is Gonna Get You! Videos of the Broadway's On Your Feet Stars