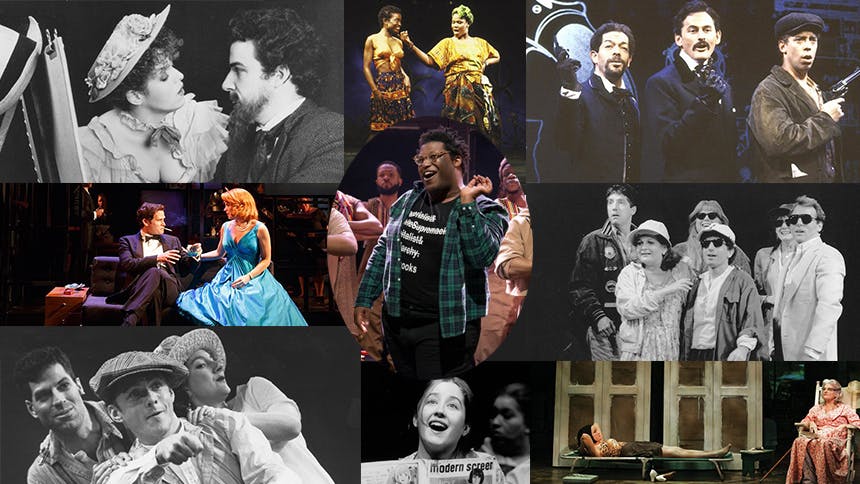 is winning over critics and audiences alike. Tastemakers and those in the know are fighting for tickets to see this daring and powerful new musical before it concludes its run on July 28.


A Strange Loop is just the latest Playwrights Horizon musical to whip up a storm of buzz. The iconic off-Broadway company has a rich history of premiering some of the most beloved and fascinating musicals of all time—some have gone on to Broadway (as A Strange Loop should) and some have gone on to cult musical status. Scroll on as BroadwayBox looks back at a dozen or so standout musicals that began at Playwrights Horizons.

In Trousers, March of the Falsettos, & Falsettoland


William Finn's Marvin Trilogy of one-acts all premiered at Playwrights Horizons. In Trousers played twice in the 1978/1979 season; March of the Falsettos premiered in the 1980/1981 season before transferring to the Westside Theatre; and the final piece, Falsettoland debuted later in the 1989/1990 season before transferring to the Lortel Theatre. Chip Zien starred as Marvin in In Trousers and then Mendel in the later two shows. Alison Fraiser played Trina in the first two parts and then Faith Prince played Trina in Falsettoland. In 1992, Falsettos, which consisted of parts two and three of the trilogy, opened on Broadway and won Tony Awards for Best Book and Best Score. In the Broadway production, Trina was played by Tony nominee Barbara Walsh.


Sunday in the Park With George

Stephen Sondheim and James Lapine musical masterpiece was inspired by the painter Georges Seurat and his painting A Sunday Afternoon on the Island of La Grande Jatte. The production played 1982/1983 season but just the first act of the show; the complete two-act show was only premiered during the last three performances at Playwrights. It starred Mandy Patinkin as George and Bernadette Peters as Dot and moved to Broadway in 1984. The Broadway production received 10 Tony Award nominations, winning two. The off-Broadway cast notably included future stars Kelsey Grammer, Mary Elizabeth Mastrantonio, and Christine Baranski, none of whom transferred to Broadway with the show.

Lucky Stiff premiered in the 1987/1988 season and was the first musical collaboration between future Tony winners (and legendary writing team) Lynn Ahrens and Stephen Flaherty. The comedy is based on Michael Butterworth's 1983 novel, The Man Who Broke the Bank at Monte Carlo, and starred Stephen Stout as Harry, Julie White as Annabel, Stuart Zagnit as Vinnie and Mary Testa as Rita. Lucky Stiff has not played Broadway though it did play the West End and received a 2015 film adaptation.


Once On This Island

LaChanze and Company in 'Once On This Island'

Ahrens and Flaherty's Caribbean spin on The Little Mermaid is based on the 1995 Rosa Guy book, My Love, My Love; or, The Peasant Girl, and played the 1989/1990 season. The musical starred LaChanze as Ti Moune and Jerry Dixon as Daniel and featured direction and choreography by Graciela Daniele. Once On This Island moved to Broadway in 1990 and was nominated for eight Tony Awards. The Broadway revival won the Tony Award for Best Revival in 2018.

The company of 'Assassins'

Stephen Sondheim and John Weidman's musical about the men and women throughout history who have attempted to kill the president was part of Playwrights' 1990/1991 season. The original off-Broadway cast included theatre greats Victor Garber, Terrence Mann, Patrick Cassidy, Debra Monk, Greg Germann, and Annie Golden. In 2004, Roundabout opened a new production of Assassins on Broadway.

One of musical theatre's biggest cult musicals, Adam Guettel and Tina Landau's Floyd Collins played the 1995/1996 season. The show is based on the 1925 death of cave explorer Floyd Collins near Cave City, Kentucky. Christopher Innvar starred as the title character, with Martin Moran as Skeets Miller, Jason Danieley as Homer Collins, and Theresa McCarthy as Nellie Collins. Floyd Collins won the Lortel Award for Outstanding Musical and an Obie Award for score.

Jeanine Tesori and Brian Crawley musical adaptation of Doris Betts'short story The Ugliest Pilgrim premiered in the 1996/1997 season. The production starred Lauren Ward as Violet, Michael McElroy as Flick, and Michael Park as Monty. It won both the Drama Critics' Circle Award and Lucille Lortel Award for Best Musical. The musical did not make its way to Broadway until 2014, starring Sutton Foster as the title character.

Alice Ripley and the company of 'James Joyce's The Dead'

OBIE winner Kirsten Childs' semi-autobiographical musical played the 1999/2000 season. LaChanze returned to Playwrights to star as Viveca Stanton, and audiences saw her go from the 1960s-1990s.


The last Playwrights musical to move to Broadway, Grey Gardens played the 2005/2006 season. It was a brilliant musical adaptation of the Maysles brother's cult documentary. It featured a book by Doug Wright, score by Scott Frankel and Michael Korie and direction by Michael Greif. Stars Christine Ebersole and Mary-Louise Wilson would go on to win Tony Awards for their incredible performances.

The company of 'Saved'

Kelli O'Hara and Isaiah Johnson in 'Far From Heaven'


This Kelli O'Hara vehicle played in the 2012/2013 season. The musical adaptation based on the film of the same name, Far From Heaven featured a score by the same Grey Gardens team and direction by Michael Greif.

A Strange Loop
New
Discount up to $60
Newer
To Celebrate Little Shop of Horrors Return to Off-Broadway, Check Out Photos & Videos from the Original 1982 Production
Older
Learn a Bit More About the New Broadway Play Sea Wall/A Life with These Videos of Stars Jake Gyllenhaal & Tom Sturridge