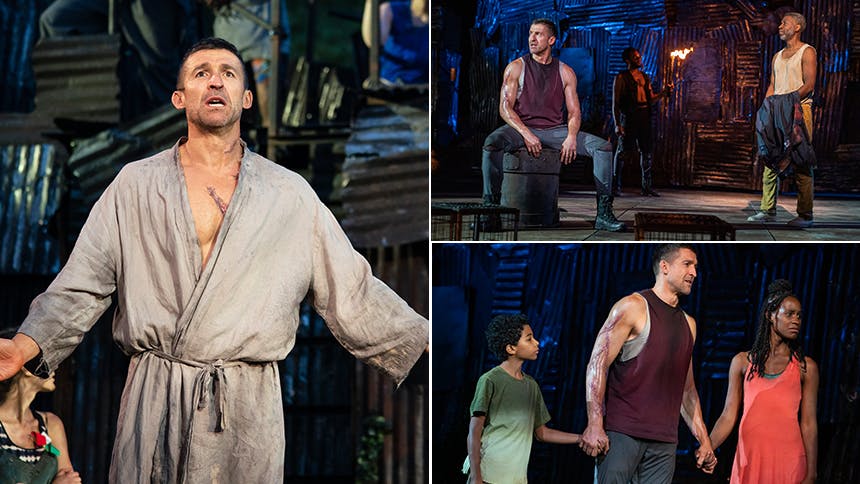 , running through August 11 at the Delacorte Theater. The free, outdoor Public Theater production sets the play at the turn of the 21st Century, in the year 2080, after climate change wreaked havoc on the planet.


A foremost interpreter of Shakespeare, Jonathan Cake previously appeared at The Public in Antony and Cleopatra, on Broadway in Cymbeline, off-Broadway in Measure for Measure and Much Ado About Nothing, and onstage in the UK at Shakespeare’s Globe, the Royal Shakespeare Company, and on the West End. BroadwayBox caught up with the stage and screen star to talk about revisiting Coriolanus, the immediate message of this production, and being mega-famous in France.

1. You previously played Coriolanus at Shakespeare’s Globe in London. Why did you want to revisit it now?
The honest reason is that Dan Sullivan asked me to. And because it’s Shakespeare in the Park, which I’d always wanted to do, and I was longing to work with the Public again. But these great parts stay in your mind and your body, whether you like it or not. You’re never done with them. Sometimes they’re just done with you.

2. Daniel Sullivan’s production is set in 2080 after climate change has destroyed the planet. What was your initial reaction when you heard about the concept? What excited you about telling this story this way?
I think it’s such a brilliant conception because reframings of Shakespeare’s settings are common, but what’s not common is when the stakes of the characters in the play are the same as the audiences’. We’re going to hell in a handcart if we can’t put a brake on global warming, and Dan’s setting makes that near future an explicit warning—as opposed to, say, setting it in 1930’s Germany or something. It makes you understand why bravery and violence could thrive in a world that has lost everything except the will to survive, just as in the Ancient Rome of Shakespeare’s play. A world of brutality that awaits us all unless we do something.

3. You’re making your Shakespeare in the Park debut with this role. Is this a bucket list moment for you, having performed Shakespeare professionally since your teen years with the National Youth Theatre? What’s the best piece of advice you’ve received so far about what you’re in for?
Yes, it is a bucket list moment for sure. That famous stage has seen so many extraordinary shows and extraordinary performances and is part of the pulse of the city in the summertime. The best bit of advice so far has been: watch out for the raccoons.

4. In your experience, what is the difference between how UK and US audiences interact with Shakespeare?
I’ve always had a sense, ever since I did Medea on Broadway and at BAM in 2004, in the fallout from 9/11, that US audiences lean forward a little more to see what the great poets have to say about extremity. When times are hard, there’s a sense in a US theatre that there’s something to be divined or understood from the great plays. I don’t feel that so much in the UK, which isn't to say that the theatre culture there isn’t as involved with the world around us right now. It certainly is and because it relies less on commercial needs, maybe more so. The way it’s heard feels subtly different to me though.

5. You have an extensive screen resume. When fans stop you to say hi, which credit do they want to talk with you about most often?
Well recently it’s been The Affair fans on Showtime who are most likely to chat. But for the longest time it was Desperate Housewives. I particularly get a lot of dudes saying, “my girlfriend made me watch it”. Yeah right. In France, that show still rules. I was in Guadeloupe, a French colony, shooting for two weeks a few years back and I was briefly Justin Bieber famous. I couldn’t sit down in a restaurant for the rabid selfie taking fans of Le Femme Au Foyer Desesperees!

Don’t miss Jonathan Cake in the free Shakespeare in the Park proudction ‘Coriolanus’ at the Delacorte Theatre in Central Park through August 11.