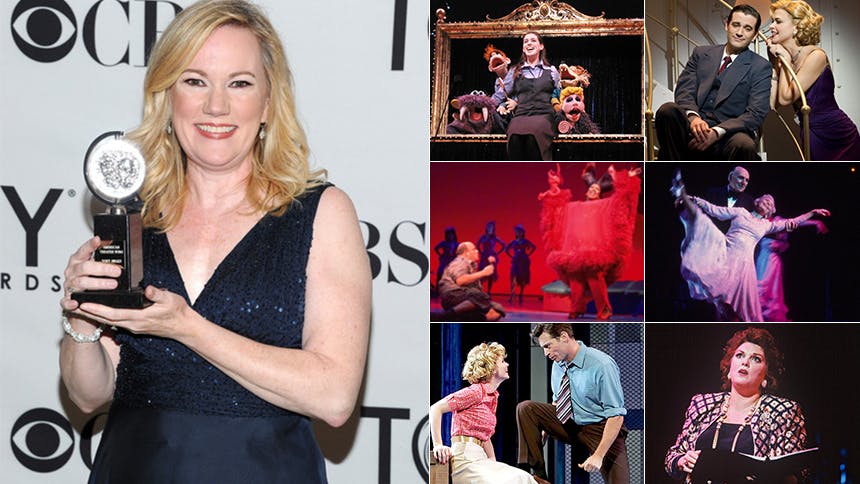 Kathleen Marshall is the three-time Tony Award-winning director/choreographer behind the hit Broadway musicals Anything Goes, The Pajama Game, Wonderful Town and Kiss Me Kate; she was the artistic director of Encores! from ’96 to 2000; and her work can currently be seen in the romantic comedy Living on Love and Paper Mill's exciting new musical Ever After. On May 4, the New York Pops will honor Kathleen and her Oscar-nominated brother Rob Marshall at their annual birthday gala The New Golden Age at Carnegie Hall. (Just check out the major award winners performing that night!)

Below, Kathleen Marhsall looks back on 10 musicals that helped to shape her acclaimed career.

Moment I consider my big break:

Call Me Madam at Encores!—my first solo outing as a choreographer in New York City.


Collaboration with my brother Rob that I consider close to perfect:

"A Romantic Atmosphere" from She Loves Me—the song, the cast, the design, the arrangement, the story telling, the humor, the way the number built to a great climax and then the denouement of the return vocal—it was like a perfect one act play.

Musical number I choreographed that really moved me:

"Danse d'Amour" from Follies— to create a dance for Marge Champion and Donald Saddler was an honor, a privilege and a total fantasy.

Project that I feel stretched me most as an artist:

Seussical —the show is practically sung-thru, so there was a lot of choreography and musical staging and finding the vocabulary and the movement for that panoply of characters was a fun challenge.


Musical from earlier in my career that I’d love to revisit now:

I've enjoyed every show that I've worked on, but I prefer looking forward to what's next.


Project I am most proud of:

My four-year-old twins, Ella and Nathaniel.


Musical number that I would consider my signature Kathleen Marshall showstopper:

"Hernando's Hideaway" from The Pajama Game—I love the way it combined music, plot, character, humor and movement in unexpected and surprising ways. [Video starts at 1:31]


Encores! show I did that I wish had a Broadway transfer:

Carnival—it was a really special show with an amazing cast—but both Brian Stokes Mitchell and Anne Hathaway were on to other projects, so transferring wasn't an option.

Performer that I would really love to do another project with:

Too many to name! I'm so lucky to have worked with so many amazing artists! But I do love all my leading ladies—Sutton Foster, Kelli O'Hara, Donna Murphy, Laura Osnes, Renée Fleming, Beth Malone—and I would do anything with any one of them any time!

Project of mine I’d love to adapt for a TV broadcast:

It would be fun to do Anything Goes—maybe you could even film it on a real boat!


Celebrate The New York Pops’ 32 Birthday and the fantastic careers of Kathleen and Rob Marshall at ‘The New Golden Age’ Gala at Carnegie Hall on May 4.