10 Plays, Musicals & Concerts To See in New York City This May 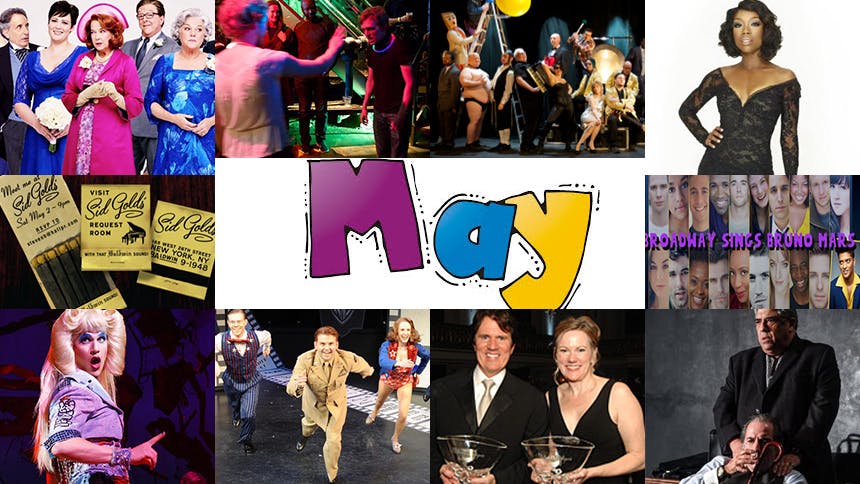 It’s May, the Tony nominations are out and you probably want to catch up on some nominated shows (and maybe some of the snubbed ones too). But take my word for it, you don't want to skip these 10 plays, musicals and concerts happening in NYC this May.

1. It’s Mother’s Day on May 10 and there’s no better show to kiki with mom at than It Shoulda Been You. Bring Grandma too and your most fun aunt. The whole gang will love seeing Tyne Daly and Harriet Harris go head-to-head as future in-laws (one Jewish, one a WASP) feuding on their children’s wedding day. The one-act musical has so many sweet love stories, lots of laughs and several moments for you to giving that oh-so-loving “mom, that’s totally you up there” look. And really, isn’t that what Mother’s Day is all about?


2. Hedwig must have taken some of that Death Becomes Her drink because she does not age a single day. Our top show of the 2014, Hedwig and the Angry Inch, has two new headliners and they are breathing a whole new life into the musical. Glee’s Darren Criss and Rebecca Naomi Jones are serving you rock-star realness—this Hedwig and Yitzhak pair sound, act and move like real punk-rock badasses.


3. Speaking of badass replacements, I can't gush enough about Brandy Norwood in Chicago. Those vocals are just too much to handle and the lady can really act and really dance. She’s only in it until June 21, so get there this month.


4. Maybe it’s my Jersey roots but I’m so excited to see the two mob plays currently running off-Broadway, A Queen for a Day and Dinner with the Boys. Both plays star alumni of HBO’s hit The Sopranos: Ray Abruzzo (Carmine Lupertazzi) in Dinner with the Boys and Vincent Pastore (Big Pussy) & David Proval (Richie Aprile) in A Queen for a Day; so turn off the HBO Go and see these wise-guys live.

5. Now That Walking Dead is on hiatus, get your zombie fix and some beautiful May sun with Rocking Dead, an immersive theatre dance party on the Frying Pan—that fabulous boat docked on the Hudson River. The idea is that you’re at a dance party on a boat in a post-apocalyptic zombie world where uninfected Normals and infected zombie Virals live side by side and you want to survive the outbreak, bust a move, make friends with the bartender and have a great time. Every Saturday night in May beginning at 7 PM.


6. One May musical that sounds super-intriguing is Cagney at off-Broadway’s York Theatre. Robert Creighton (Drood, Anything Goes) is the perfect choice to play Hollywood’s go-to tough-guy James Cagney in this bio musical about Cagney’s rise to film stardom.

8. If you’re looking for a unique theatrical experience, check out The Gong Show. Everyone has heard of this name brand but the stage show is something you’ve got to see to believe, and beginning May 1, the troupe of crazies and the golden gong set up shop in Midtown’s Davenport Theatre. What’s better than a downtown experience in an uptown location?

9. This month, New York gets a brand new piano bar called Sid Gold’s Request Room (at 26th St & 7th Ave) and it sounds fantastic. Divided into two rooms and styled like something out of Mad Men, Sid’s is going to play it all: pop from the ‘60s to today, new wave, disco and punk. Spring is the perfect time to try something new and this is it.

10. Three concerts caught my eye this May and each is packed with star power. Broadway by the Year at Town Hall on May 11; Bobby Steggert, Eric Anderson, Mary Testa & more are singing songs from musicals that premiered between 1966 and 1990 (so basically the best music ever). Then on May 17, Zak Resnick, Corey Cott, Lena Hall, Corey Mach, Marisha Wallace & more come together at The Cutting Room (bravo!) for Broadway Sings Bruno Mars. Finally on May 26, Constantine Maroulis, John Arthur Greene, Molly Pope & more are singing Elton John hits at 54 Below.

Chicago
Discount up to 28%

A Queen for a Day
Best Priced Tickets