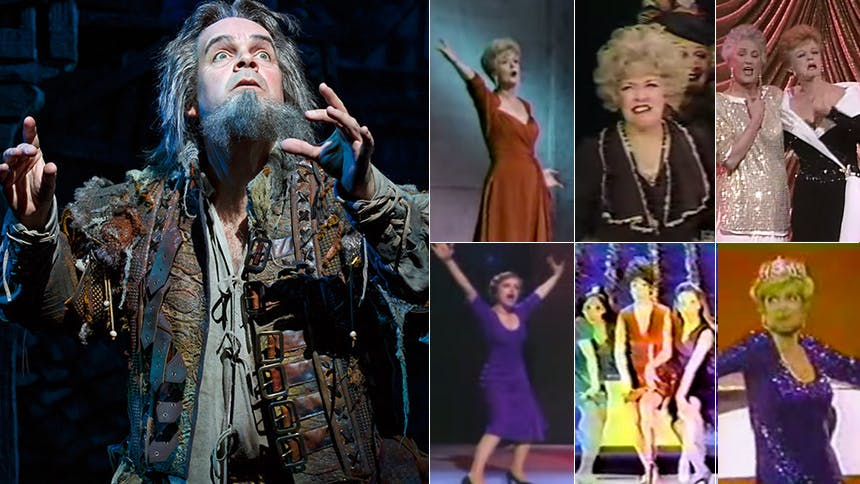 In 2001 Brad Oscar was part of the musical comedy that rocked Broadway, earning his first Tony nomination as Franz Liebkind— the Führer-obsessed playwright in The Producers. This season Oscar earned a second Tony nomination for his work as soothsayer Nostradamus in another genius musical comedy that Broadway can’t stop talking about, Something Rotten!. Oscar’s big Act One number “A Musical” stops the show—like literally, mid-show standing ovation.

In the song, 1595 Nostradamus imagines what this unknown genre ‘a musical’ could be like and the brilliant number is jam-packed with so many Broadway references, fans are falling over themselves with laughter, cheers and applause throughout the showstopper.

If this is the number the 10-time Tony-nominated new musical performs at the 2015 Tony Awards, you can bet it will be one of those numbers fans will talk about for years and years to come. That being said, who better than Something Rotten!'s Brad Oscar to kick off this year’s Ultimate Tony Awards Number Series?


How special to be able to see that number in its original state with Donna, Baayork and Margo executing that Michael Bennett choreography like no one else can. And what choreography!


Very special to me, as I had seen the show pre-Broadway in Washington, DC, and this was the first Tony Award telecast I remember watching and really connecting to. And there's nothing better than a little "Easy Street"!


The incomparable Dorothy Loudon performing what has now become a semi-standard, and no one did it better. I was lucky enough to see the show at the Majestic, she was beautiful in it, and it was one of the most gorgeous productions I've ever seen.

Dreamgirls, Dressing Room scene into “And I Am Telling You…” 1982 Tonys


This is special to me not just for Ms. Holliday's history making moment, but for the scene that precedes it. The original cast album is so truncated that this is the only "recording" of that original cast performing that fantastic sung through scene leading up to the song we all know. Priceless!


I think they included a Gershwin tribute that year, which is why one of the finest musical comedy performers ever was able to steal the show with this little known song. Can you tell I'm a Dorothy Loudon fan??


This was the first telecast I actually attended live, at the Mark Hellinger Theater, a house we need back! And to see two of my favorites sing this tune from one of my favorite shows, too much!


Having seen her as Rose in 1974, it was a thrill as an adult to see her tear into this classic song again. There's no one like her.


How wonderful that this amazing, heartbreaking and ever so joyous performance was captured for all to see. Michael left us way too soon, but just watch this number and he lives on forever.


A wonderful original song, a tribute to the past and present of Broadway. It starts with Barry Bostwick, then Ms. Liza herself takes over, has a wonderful bit with the brilliant clowns Bill Irwin and David Shiner, and then many of the current and long running shows all fill the stage in a terrific and exciting start to the evening.


Just as all great actors must conquer their Lear, how wonderful that so many of our great ladies of the musical theater have tackled Rose, and this is a performance to be reckoned with. At once heartbreaking, fierce, frightening and triumphant, she makes it all her own, one of the most honest performances of Rose I've ever seen.

See more musical references than you can count as 2015 Tony nominee Brad Oscar stops 'Something Rotten!' cold with his big number "A Musical" at Broadway's St. James Theatre.