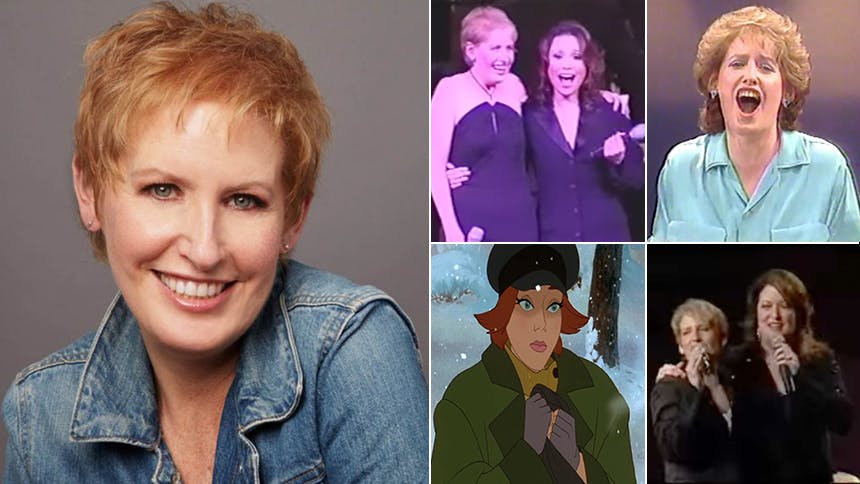 Tony nominee and Emmy winner Liz Callaway is the voice an entire generation of musical theatre fans came up adoring and emulating. Her roles in the original Broadway productions of Baby and Miss Saigon cemented her place in theatre history. She's beloved for her work as the voice of Anya/Anastasia in Anastasia movie, and her six albums. She returns to Feinstein's/54 Below on July 25, 28, 29 & September 10 for The Beat Goes On


Scroll on as Liz Callaway looks back and shares the wonderful stories behind six of her most popular YouTube videos.


Obviously, it’s incredible to have a signature song but it's also having it be that song. I think it’s one of the most powerful, beautiful songs ever written. It brings back such memories to see that clip. I just the joy of getting to close the first act every night with that song. It was my first big role on Broadway. It was an incredible experience; I still sing the song in concert. The song has a different meaning to me now. It’s a timeless song, and it was cool to see the video—I guess I really was singing my face off there.

I didn't get Baby in the traditional way of auditioning for a show. I met Richard Maltby while I was auditioning for another show, and he told me I was right for a show he was writing about a pregnant college student. Then David Shire came and saw me in a show I was doing, and I went up to him afterwards and he told me that Richard Maltby told him to check me out. I volunteered and said, "You know, if you guys ever need to hear your songs sung by a female voice, I will help you out." Then Richard called me up and I went to his apartment and started working on a song, and then another song, and one of the songs was "The Story Goes On". I had no idea then I would actually do the show; I was just learning a great song in someone's apartment. Then originally we did a ton of backer auditions, and originally "The Story Goes On" ended on a high G, but at one of the backer auditions I had a really bad cold. I said, "There’s no way I can hit that note." So we ended on a C and we never went back. Thank god! So much better. I pray there’s no recording of me singing the song ending on a G, 'cause it wasn’t pretty. It made a huge difference to end the first act on that triumphant emotion and really nice note.


When we did Baby, we thought we would close literally every week—we would have the closing notice up every week and then we’d take it down. So there was no job security at all, but they kept us open for the Tony noms. Then we got about seven nominations, so there was a huge bump in the box office. It came the night of the Tonys and I think we thought our best chance of winning was Best Score. We certainly thought that was something we might be able to parlay into helping the show run longer—it was a really great year for musicals. We were behind the curtains getting ready to do "I Want It All" when they announced Best Score..so Beth, Catherine, and I were holding hands and we looked at each other and we went, "That's it. It’s over. You know the shows gonna close..." And curtain up.


It was a thrill to get to be a part of Lea’s concert and to sing it with her again. I'm sorry we never did an American cast album of the show, but because Lea and Jonathan [Pryce] had done it in London, they thought that was enough. It's really on my bucket list to do a recording of "I Still Believe" with Lea; I'm hoping to do a duets album at some point so that would be top of the list. Neither of us had sung it since we had done the show, so I remember at the rehearsal Lea was like, "God, I hope I can sing it in this key." And I was like, "Yeah, me too!’ The audience's reaction was pretty extraordinary.

I don't remember that much about Miss Saigon because I gave birth to my son a month before doing the first preview. I had a two weeks maternity leave after having a C-section—I was in the hospital a week, then home a week, and my first day back was our first day at the theatre. I was really moving slowly and it was time to tech "I Still Believe". I'm just behind the set and the crew was there with a flashlight and they said, "Here’s your ladder to go up to the bed." And I thought, "That is so cute, they're making a joke I have to climb a ladder." I literally had surgery two weeks ago. So I climbed up very slowly, got there, we sang through the song, and afterwards Nick Hytner (the director) said, "Gosh, for someone who was just cut open that was marvelous."


You know what was interesting about the concert too is that I was a surprise guest. Lea brought me on—she was pregnant with her daughter—she was singing "The Story Goes On", and then in the middle of it she introduced me. Then I came out and we finished signing "Story Goes On" together, and then we did "I Still Believe" and then they said I should do a solo. Since "Meadowlark" is one of my all-time favorite songs to sing (and just the fact I could sing it with an orchestra at Carnegie Hall) it was amazing. There are a lot of wonderful renditions and so many actresses and singers have done "Meadowlark", it's nice to have my version out there for people to hear.


What's funny about that clip is, when we do this song, Ann sounds just like Judy Garland—she can do a great imitation. So she does Judy Garland and she does it so well and she knows that I do a really, really pathetic Barbra Streisand. So that’s our joke when we do this number in Sibling Revelry.


"Journey To The Past" was interesting. We had done a really long session in the studio and maybe at midnight Stephen Flaherty said, "Hey, you wanna hear your new song?" They had tried a lot of different songs for this spot in the film. Lynn sang it and he played it, and when I heard it, I was like, "Oh my god! That's it!" I actually sight read it, and we recorded a demo of it right then at like 1 AM so the people from 20th Century Fox could hear it and okay it. It's thrilling to know that Anastasia is such a hit on Broadway, and a whole new audience will discover this amazing score. Christy who is Anya is fantastic! I'm a big fan. She's just so wonderful in the role and such a wonderful singer, and a sweet, sweet girl. We're going to have lunch later this month.