Introduce Yourself(ie): 10 Questions with The Present Award Winner Susan Prior 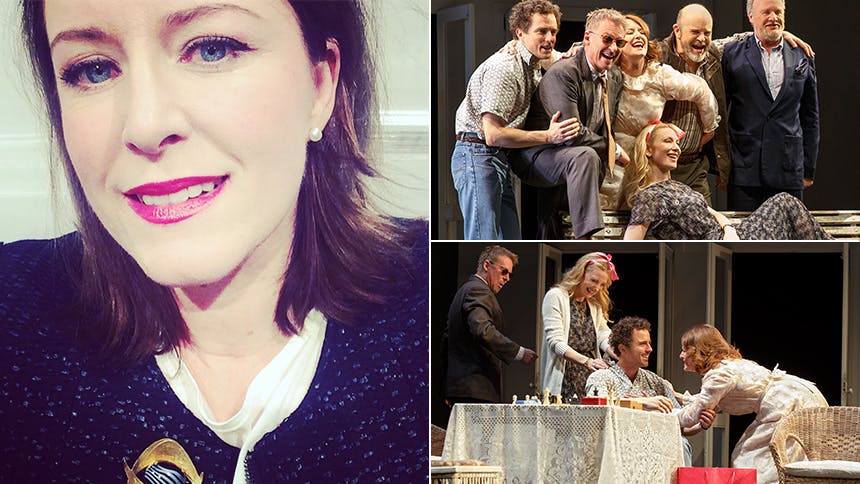 Australian Academy of Cinema and Television Arts (AACTA) Award winner Susan Prior makes her Broadway debut as Sasha, the heartbreaking, wronged wife of Richard Roxburgh's philandering Mikhail, in the Sydney Theatre Company's Broadway transfer of The Present. An acclaimed stage and screen actress, Prior is known in Australia for her TV and film credits Puberty Blues (AACTA nomination), All Saints, Home and Away, The Saviour, Top of the Lake, and The Rover (AACTA win—equivalent of an Australian Oscar). Get to know Prior a bit better as she talks to BroadwayBox about playing this complex and passionate character, where she keeps her AACTA, and the American TV series she'd like to join.

1. The thing I love most about Sasha and her journey in The Present:
Is that even after playing her for so long I still find new discoveries every night. I love that, although she seems like a simple person, her journey is complex and passionate. She tries so hard to find the truth, and she will do anything to give her child a good life. Basically, once I put that fantastic dress on, and Dennis does my hair, the transformation is complete.

2. The biggest surprise about performing the play on Broadway has been:
The depth and enthusiasm and openness of the audience every night. It's exhilarating to bring a new Australian work to America, and for an international audience to love it so much is inspiring. (Let's do it more often.)

3. The Australian stage credit I wish New York audiences could have seen me in:
I was in a play called That Eye, the Sky, directed by Richard Roxburgh, adapted from a book by iconic Western Australian writer Tim Winton. Very beautiful and dark, there was a lot of magic to it. You could feel the heat of the Australian sun, smell the eucalyptus in the air, the smoke from summer bushfires. It cast a spell.

4. I keep my AACTA Award for David Michod's film The Rover:
In front of a mirror that was owned by my Great Grandmother, passed down to my Grandmother, and then to me.

5. If someone is planning a trip to Sydney, I would highly suggest visiting:
Any organic farmer's markets.

6. While I’m here in New York, one thing I have to do:
More walking and accidentally coming across random things, like finding out the Empire State Building was open at midnight on Christmas Eve, and watching fireworks by chance in Central Park on New Year's Eve. What a buzz.

7. The film or performance that first inspired me to pursue acting:
I was inspired initially by the freedom and power of being able to communicate without stammering. But, I saw Daniel Day Lewis in My Beautiful Laundrette and A Room With a View and had no idea it was the same person. I love that he completely transformed, that element of surprise, and there were no boundaries to what he could or could not play. It's my credo.

8. The role that pushed me to my limits as an actress:
Probably Venus and Adonis, a two-hander with Meow Meow. We played Venus together and had to be twin souls, sing in harmony, speak Shakespeare, be sexy, crack jokes, etc, etc, etc in high heels tight dresses with Rapunzel-like wigs. Probably a triple helix level play. But a brilliant challenge. In film? Suturing stitches with a razor sharp needle into a very thin latex membrane which was glued on to Robert Pattinson's stomach in The Rover.

9. My most cherished memory of being directed by Philip Seymour Hoffman in the play Riflemind:
Every single moment is cherished.

10. If I could join any American TV series right now, I would choose:
Love so many, but if I had to choose one it would be Fargo, or anything directed by John Crowley.

Don't miss Susan Prior as Sasha in 'The Present' at Broadway's Barrymore Theatre through March 19.