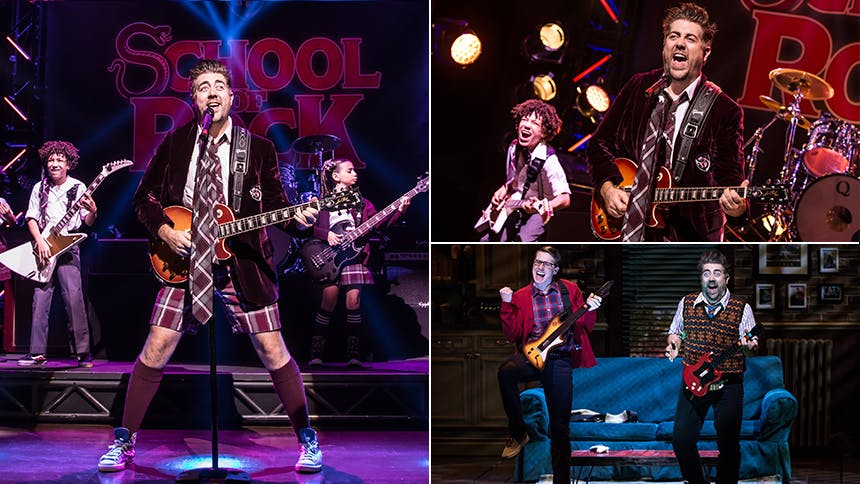 . The comedian is best known for his starring TV gigs as Kirstie Alley's son on the sitcom Kirstie and as Simon Monjack in Lifetime's The Brittany Murphy Story. He also starred on Broadway and then toured the country as the title star of Shrek: The Musical.

BroadwayBox caught up with Eric to hear from him about how his School of Rock warm up really frees him for the show, the highlight of his professional life, and finding his tribe as a kid.

1. When you found out you got the gig, what excited you most about the prospect of taking over Dewey and what scared you most?
I was so very excited to take on this role. This role and the story is totally in my wheelhouse, so I was anxious to bring my take to the show. Rock 'n' roll and punk rock were a huge influence on me growing up, as I briefly thought about accepting an internship at a record label when I graduated; so becoming Dewey in that respect was a piece of cake. As a dad to two awesome kids (Sophia [6] and Miles [2]) and having some real life experience teaching college students, I know that it is important to really take kids seriously. Both of those personal experiences really informed my approach to Dewey. I love talking to kids, making them laugh, and inspiring them, which is something you get the honor of doing when playing this role in this show as it has a family audience. The shows of Andrew Lloyd Webber helped to shape my love of musical theater. Every time I step onstage in this role, I know I get to do that for some young kid out there. I think I get to do that as the character, and hopefully as the actor off stage as well. In regards to what scared me, I was intimidated by the score. Not only is it A LOT of singing, and high singing, and rock singing, BUT it is from Lord Andrew Lloyd Webber—and you know you’ve got to represent! He is one of my absolute heroes! Jesus Christ Superstar and The Phantom of the Opera are two of my favorite shows that inspired me as a young person. I knew it was going to be a lot of work, but is so much fun to sing this rock concert of a score each night.

2. This score is no joke, and Dewey is super physical—what’s your warm up like?
That is the truth! I have to sort of live like a monk to do this show, but I love a good challenge. My last truly physical role was Shrek on the national tour, but it was demanding in a different way. However, as a result of playing Shrek for a year, I am no stranger to living a lifestyle to serve a part. I have to get plenty of rest/sleep at night, steam multiple times a day for my voice, and I am careful about what I eat and drink (not too much Taco Bell). I usually get to the theatre about two hours before the show to warm up vocally and physically. Lots of stretching, steaming, and scales, followed by playing the guitar for a little bit before the show to make sure I am honed in on that aspect of the part too. I also do a vocal and physical cool down after the show, which includes steaming again, scales, and rolling out muscles and some ice packs here and there. It’s so worth it, but I definitely find myself limping around the house some days and discovering bruises from the show and being confused on how they got there. If you do a solid warm up, you can really just go for broke when you are in the show and not worry about it. A good warm up frees you up as the actor.

3. Who is your comedy hero?
Robin Williams is my acting AND comedy hero. His ability to truly have fun, follow his instincts, and open himself to the most pure, childlike aspects of his soul are what I constantly try to achieve. Nathan Lane is another favorite because his sense of timing is the best in the business.

4. When you look back on your Kirstie experience, what memory makes you laugh most and what memory warms your heart most?
Doing the Kirstie show was a lifelong dream come true for me. I had always wanted to be a series regular on a sitcom and being a part of that show with comedy legends was so amazing. Working with Kirstie Alley, Rhea Perlman, and Michael Richards (along with our amazing guest stars) was like a master-class in comedy every week. They would tell stories about when they were shooting landmark shows like Cheers or Seinfeld and I would just listen with amazement and try to take in whatever knowledge that might rub off. One of the coolest moments was when I was sitting between Jason Alexander (a guest star that week) and Michael Richards and they were just reminiscing about their auditions for Seinfeld. Even more surreal than hearing them was when they turned to me and asked about my audition for Kirstie, making me realize that these legends were now my colleagues. When George Wendt was a guest star, we bonded over “DA Chicago Bears” because we are both huge fans of the team, as I am a Chicago native. The whole experience of shooting that show was a highlight of my professional life.

5. What were you like at the age of the kids in School of Rock?
I was super-duper awkward! As a kid I was very small, had braces, a terrible '90s bowl cut parted down the middle, glasses and crossed eyes. I actually had major corrective eye surgery when I was 18 to fix my eyes, but all growing up I had strabismus which means I can only see out of one eye at a time and so I looked cross-eyed all of the time. They both work, but not together. Having crossed eyes meant I got teased a lot and I turned to comedy to sort of battle that. If I could get the other kids laughing at some “bit" I did in class, maybe they would ignore my imperfection. It is so hard to be a kid. That is why it is so amazing when you find your “people” or your “tribe”, which I found as a music and theater kid. Then, you can truly start to let go and be yourself. The young actors in our show constantly impress me with how they are able to be so professional, but are also totally real, genuine kids.

Get yourself over to the Winter Garden Theatre to LOL with Eric Petersen in 'School of Rock'.