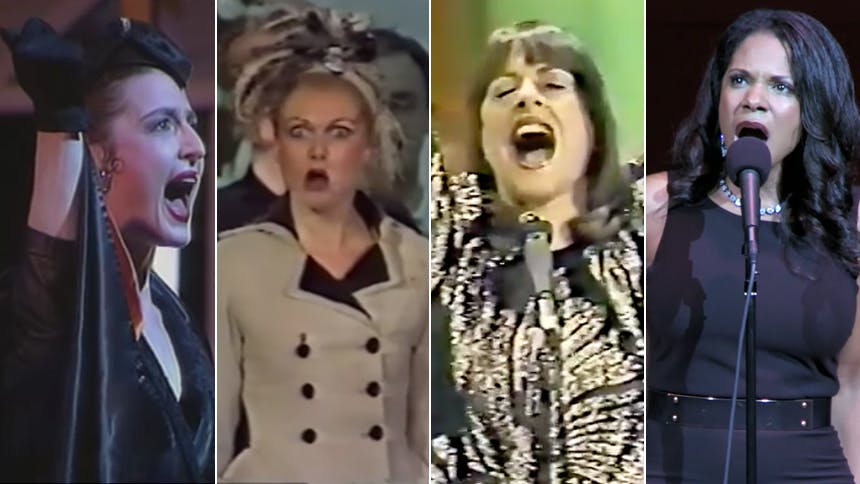 Andrew Lloyd Webber & Tim Rice’s Tony Award-winning fan favorite Evita returns to New York November 13-24 as part of Encores! annual gala presentation. The role of Argentina’s First Lady, Eva Peron, is split between Argentine recording artist Maia Reficco as young Eva and Solea Pfeiffer as adult Eva. This is sure to be a breakout moment for Solea. Though she has yet to make her Broadway debut, Solea just won critical acclaim as Penny Lane in the world premiere of Almost Famous, and she’s previously starred as Eliza in the National Tour of Hamilton, as Maria in West Side Story at the Hollywood Bowl and Kennedy Center, as Guinevere in Lincoln Center Theater’s concert of Camelot, and in Encores! Songs For A New World. Just listen to glimpse of Solea slaying Eva’s big Act II moment “Rainbow High” in rehearsal.


This solo arrangement of "Rainbow High" for The Merv Griffin Show is about as good as it gets. Broadway’s original Tony-winning Eva is serving opulence—she owns everything. Beyond what happens at 1:05, it’s all about the growl at 1:22 into the big belting at the end. Also her arms are doing a full-out “No Good Deed” and I live.


Before Patti, there was Elaine. When Evita premiered in the UK Elaine Paige played the title role and won herself an Olivier Award for the performance. This is their Olivier performance and the song starts around 1:32 after a little “High Flying Adored”. She comes alive in a ferocious way around 2:55. Strong finish.


When the actor with the most Tony Awards ever sings “Rainbow High”, you turn up the volume and listen. It’s just so glorious. You feel like you’re flying with her as she hits those notes.


The New Zealand actress played Eva in 1990 Australia, and my gosh, does she make it all seem so effortless. It’s truly stunning. It was such thrilling singing, I held my breath for what was next.


Ok, but why hasn’t Mandy played Eva professionally? This is a grand slam, unleash the beast on that score!


Listen, is she serving the best vocals here? Absolutely not. But there is no denying she delivers the performance, the attitude, and the moment. #JusticeForTheEvitaMovie.


Thanks YouTube for introducing us to Madeline Fansler, a swing on the Kinky Boots tour. Madeline’s rehearsal room rendition appeared as a related video and blew me away! From the jump, you feel the power in her voice. I was about to cheer along with the people in the room.


So the final three are all school Evas—aka teenagers—who nail it in a way that will leave you #shook. We’ll take each one from their “I’m their savior” moment. Here’s Juliet Perel who played Eva this past summer at French Woods, and her moment goes from 1:29-2:36—stick around for the hat moment and her “star quality”.


Alexandra starred as Eva in 2016 at Oklahoma City University. I would start at 1:40 but stay with her until the end. She leans into that “star quality” at the end, and it’s jaw-dropping.


Haley played Eva at her high school in 2017, and my goodness. Her performance is so captivating. What an actress, then she turns the vocals on full blast at 1:20. I can’t believe this is a high school student.

Evita
New
Best Priced Tickets
Newer
Jack Saleeby Talks About the Rich History Surrounding His New Musical About Gay Teens in the Victorian Era, Bright and Brave
Older
The Rockettes Want You to Know These Tips Before Seeing the 2019 Christmas Spectacular
Sign up for BroadwayBox Discount Alerts