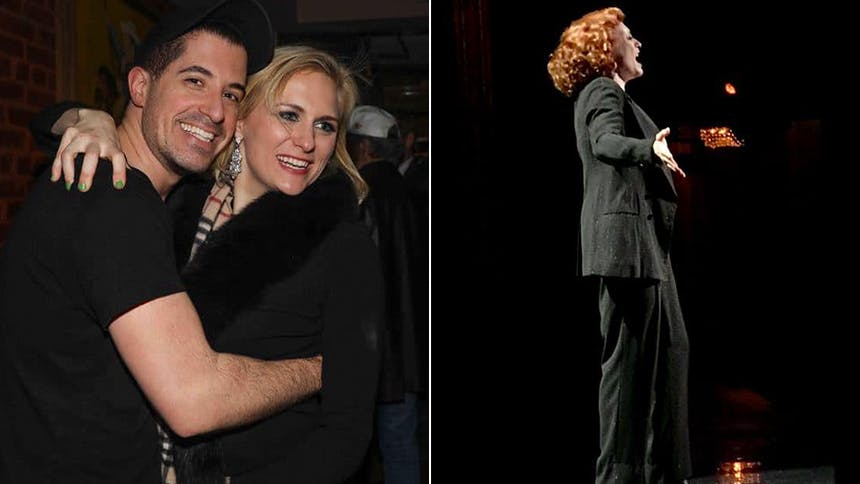 . Haley reigns as The Countess of the Clink through September 1 at the Ambassador Theatre. Also this summer, Haley will pay tribute to one of her favorite artists in the one-night-only July 26 concert Sing Happy: The Songs of Liza Minnelli, written & directed by Will Nunziata.


BroadwayBox caught up with Haley to talk about joining Broadway's longest-running revival, her love of Liza, and more.

1. How would you describe your Mama Morton?
My Mama has fought tooth and nail to get where she is in life and has learned how to survive. The prison for her is a place where she is in control and on top. She thrives when she is pulling the strings and in charge, and it fuels her.  She gets a bad rap for being selfish, but I think she simply feels the need to look out for herself first in a world where no one else ever did when she was growing up. So, that’s what she does, she looks out for herself, and she survives on top.

She uses the girls to get what she wants sometimes, but she also genuinely feels responsible for them. There is mutual respect between her and Velma, and I think she sees part of herself in her. The women she favors the most are the ones who have worked their way up, the way she has. She has no time for and is resentful of entitled girls, like the heiress Kitty, who comes in never having known what it’s like to work for anything.

But, though she is self-motivated, I think Mama also genuinely cares about her girls. That’s why the Hunyak scene is so devastating…because not only has she lost control in her prison, but she has lost one of the girls she cares for.

I love playing this woman every night, and, the more I do it, the more layers I find.

2. What’s your favorite Chicago moment to watch from the onstage chairs every night?
Oh my goodness, I have the best seat in the house every night: onstage! So many moments and memories so far. I’ve already played with four different Roxies, and I love watching different takes on the Roxie monologue (all of which have been brilliant) and watching the incredible ensemble of guys dance and interact with them.  Also, I love watching Amra Faye-Wright, who I think is just out-of-this-world incredible, do “Velma’s Last Stand.” I love also watching “We Both Reached for the Gun”, as it is also thrilling to watch the incredible company do their thing. It’s an honor to be onstage and offstage with the men and women of this cast, and I feel so lucky I get to watch them shine every night.

3. What was your first introduction to the musical Chicago?
Early in college, I was taking a summer program at CAP 21/ NYU Tisch. I was in a scene study class with Kathryn Rosseter. (Random fact: the fabulous Condola Rashad was in class with me and we did a scene together at one point.) Anyways, Katherine cast nineteen-year-old Haley as…wait for it…Mama Morton. I performed the scene “Class” as my final presentation that summer.  Believe it or not, that is when I first dug deep into the show and did research on the show itself, although of course I knew many of the songs growing up.

4. What’s your favorite Yankees memory with your grandfather, George Steinbrenner, and the family?
My grandparents were my best buddies growing up. My grandfather was the only other one in the family who sang. He starred at Williams College in the Glee Club (he was in the same class as Stephen Sondheim), and he did Gilbert and Sullivan growing up. He also produced Broadway shows with the Nederlanders and won a Tony award for Applause. The last thing he ever said to me was “I Love You, 'Broadway'."

But in terms of Yankee-specific memories, I think just the moments where we were all together at the stadium. The playoffs were always like Christmas and New Years put together…the ‘90s were a magical time when we won the World Series in 1996, 1998,1999, and 2000. We are a big family, and I am the oldest of thirteen grand-children…I knew I would get to see everyone at the big games, and it was always magical.

5. What was the most memorable part of your Broadway debut in Jekyll and Hyde revival?
Well, I was going on for the brilliant Emmy Raver-Lampman in her ensemble track because she was playing Lucy that night. That particular track in the show enters with in “Facade” with two other ensemble members. I was the dance captain, and it was my first time on a Broadway stage. It was a week before the show closed, so the house was not all that full, except with everyone I had ever met who had bought a ticket. I remember I got entrance applause in my maid entrance! I was thrilled and honored, and I’ll never forget it.

6. What’s your favorite role you’ve played outside of NYC and what spoke to you about it?
SALLY BOWLES! It was my first professional role at Surflight Theatre, and I had the time of my life doing it. It thrilled me, and it challenged me. Also, Lady of the Lake in Spamalot at North Shore Music Theatre, as I loved getting to use my comic chops and sing in so many different styles (my then three-month-old went with me on that gig and we had a ball!)

7. You have an upcoming Liza show at 54 Below. What’s your first memory of Liza as a performer?
It was when I was in college and first saw the film of Cabaret starring Liza as Sally Bowles.  I couldn’t take my eyes off of her. I thought she was fascinating, committed, inspiring, and just riveting. She instantly became my favorite. Later that year, my Christmas present was getting to see her in my hometown of Tampa, and I almost passed out when I got to meet her after. Since then, I have been lucky enough to meet her a few times, and she has always been kind, complimentary, and so supportive of me as my career has grown.

8. What do you love about Liza as a performer? Do you have a favorite performance?
I think she is just unapologetic. She is IN IT in everything she does, and she commits 150 percent. Like me, she gravitates to characters that are both strong as hell and incredibly vulnerable.  I LOVED the one I saw because I got to see it in person. Outside of that, Liza with a Z. Classic, iconic, inspiring!

9. If you could ask Liza one question, what would you want to know?
I would want to know what role she didn’t get to play that she would have wanted to. I would also want to know about a story I heard through the years. The story goes that, for some reason, Yankee Stadium would only play her version of “New York, New York” at the end of the game when the Yankees would lose. I don’t think my grandfather realized this was going on, and when he heard wind of it, he sent Liza roses with an apology. The story goes that Liza sent him back black roses in jest. My grandpa thought it was hysterical, and they were friends after that (and he never played her version when the Yankees lost again).  I never got to ask my grandpa if the story was true or just a tale, but I’d love to know! I know he was a HUGE fan of hers.

10. What’s surprised you most about stepping into Broadway’s Chicago?
I think the most surprising thing was the night I went on. I was lucky though, as I got a great rehearsal process with my stage manager David Hyslop, music director Rob Bowman, and dance captain David Bushman, as well as working with Velma (Amra Faye-Wright) ahead of time. I adore them all!

But, there I was in the put-in before the show, where the whole cast was onstage before the show, me in costume and wig, as I sang “When You’re Good to Mama” in sound check. Now, it’s one thing to perform in front of audiences, but in front of your PEERS? Terrifying! I think I got the stamp of approval though! They have all been amazing and so supportive!  It is a gift every time I get to walk into the Ambassador. A dream come true for me.

Don’t miss Haley Swindal in ‘Chicago’ at Broadway’s Ambassador Theatre through September 1 and in her Liza concert at Feinstein’s/54 Below on July 26.

Feinstein's/54 Below
Best Priced Tickets
Newer
10 Classic Musical Performances from TV’s The Cher Show That Are Worth a Revisit
Older
Watch Rehearsal Clips from the Starry Into the Woods Concert with Betsy Wolfe, John Riddle, Kate Shindle, Tony Yazbeck & More
Sign up for BroadwayBox Discount Alerts