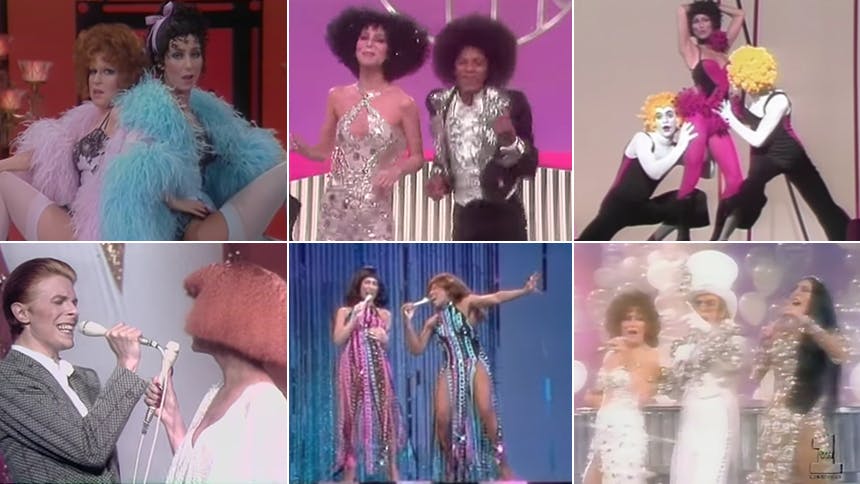 The Broadway bio-musical The Cher Show

charts the life of the singular star, taking us through decades of personal and professional milestones, including her hit series The Sonny & Cher Comedy Hour and the solo TV spin-off, Cher.

The show premiered in 1975 and lasted two very memorable seasons. Scroll on as we look at 10 video performances from that show that are 100% worth revisiting. From the epic guest stars to the jaw-dropping (and occasionally head-scratching) Bob Mackie costume pieces, get ready for the magic of The Cher Show.


Bette and Cher together in this campy, vampy medley is truly a gift. It’s like a religion and a sexuality. This is why we need variety shows back. Where else can you get this Tessie and Mazeppa moment for 7 minutes?


These outfits and these dance moves are everything. And 40+ years later, both of these ladies’ lives would end up the subject of Broadway jukebox musicals—and yet neither includes this moment.

“I Want You Back Medley” (with The Jackson 5)


Well, now I finally get that Drag Race reference. Cher trying to keep up with The Jackson 5 choreography is legit a mood—it’s like when you have a few cocktails at a wedding and truly believe no one has ever dance “The Electric Slide” better. Also, this medley is lit.


After this many videos, one must pay respect to Cher’s wig game and how she really tries to match it to the guest star. Also, imagine the work that went into each of these 8-minute medleys that she’s known for? No wonder she talks about being so overworked during The Cher Show.

“What Can I Do For You” (with Patti Labelle)


Since Broadway’s The Cher Show includes this moment of Gregg guest starring on his future wife’s TV series, we wanted to include it here too. Good to report, the moment works better in the musical than it did on TV in 1975.


It’s fun and it’s well sung—what more do you need? It’s a real journey though, so settle in.


This is so trippy—bordering on scary depending how you feel about clowns break dancing—it just had to be included. Truly the stuff of nightmares.


The category is Winter White and Cher is serving us Christmas Barbie does Doctor Zhivago. It’s honestly goals. Also, if anyone can draw the correlation between Neverland/Peter Pan and this Siberian scene, please reach out!


This is how I imagine gay heaven: Cher, Bette, lewks, “Proud Mary”, and Elton at the keys. #Iconique

’The Cher Show’ runs on Broadway at the Neil Simon Theatre through August 18.