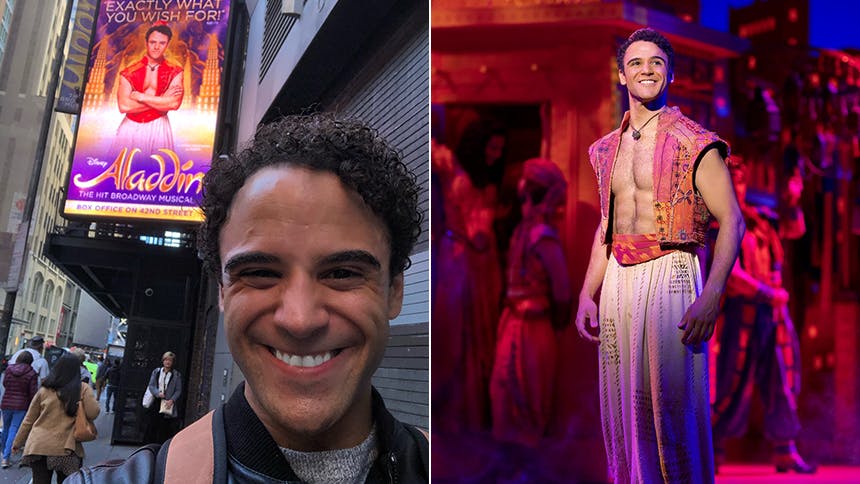 . Before coming to Broadway, Clinton played Aladdin on the musical's North American tour.


Scroll on as BroadwayBox gets to know Clinton a bit better as he talks about his eternally optimistic Aladdin, his pre-show rituals, and the challenges that come with leading a Broadway musical.

1. What was the phone call like when you found out you’d make your Broadway debut as Aladdin?
I was on a layover flight from London about to take off to return to my Aladdin tour family. The "airplane mode" speech was given so I reached for my phone when I saw a message from my manager saying, "CLINTON. CALL ME ASAP." I gave the most nonchalant callback to be told I would be going to Broadway! Everyone around me was preparing to rest for the flight while I'm in my seat bawling my eyes out. Once I got off the phone, the plane was about to take off so I had no time to call my mother! Instead, I told the folks sitting around me, obviously confused to witness a grown man crying at take-off. Spent an hour flight celebrating with strangers! Definitely one for the books.

2. What quality was most important for you to infuse your Aladdin with?
One key quality trait I always aim for in Aladdin is his optimism. He doesn't give himself time to delve into the negativity of things, which is why it's such an effective point when you (the audience) can tell something has actually become more conflicting than usual to him.

3. After all this time, which moment in the show always make you smile?
Simple. "Friend Like Me" alongside my brother, Major Attaway. His energy is so comforting but exciting that I can't help but look forward to it before the show ever starts!

4. Which Disney property was your jam growing up?
Oof. Three-way tie between Aladdin, Hercules, and A Goofy Movie.

5. Do you have any pre-show rituals or superstitions?
I get some upbeat music jamming, write a few affirmations up on the mirror, point to my picture of Salvador Dali at the corner of the mirror and head outside to give my dresser a double five on my way downstairs!

6. Tell us a memorable audition story.
I got an email to come in to read and sing for an Aladdin understudy on tour back in 2016. I went through a couple of auditions with that material, but then I was asked to go over the Omar understudy stuff for the remainder of the audition process. I remember being a little bummed because I thought I missed my chance of showing what I could potentially give to Aladdin, but was crazy grateful to still be seen for the gig! At the final callbacks, all of the creatives were in the room. I felt like performing the "Arabian Nights" dance break in front of Casey Nicholaw was the most intimidating experience. Clearly all in my head! After the dance call, I went in to perform the Omar material and then I was on my way. I stopped by the restroom to change and take a few deep breathes while internally telling myself "dude, you got through it." As I exited, I was stopped by an assistant who told they wanted me to come back in a couple of hours to go over the Aladdin material again. Funny thing about that is I remember it being the most relaxed audition I had ever given.

7. What were three things you always had in your suitcase when you were on the Aladdin tour?
A mug, a flannel shirt, and my sketchbook.

8. You love Spider-Man. If you could have his powers for a day, what would you do?
Simple. I would take a personal day to swing around the whole entire city and finish the night getting a massage because my arms would be so sore. #NoRegrets

9. What’s the most challenging thing about being a leading man on Broadway?
Being on the road for two and a half years, I built a stamina for this role. I knew I had to modify some eating plans, as well as fitness, but I was able go out and explore a good amount. Being back in the city and on Broadway, I can't tell you how many times I've had to just say "no" to social invites because my mind and body needed to get home and collapse to bed.

10. In your lifetime, which movie do you think you’ve watched the most? What do you love about it?
Hook! Aside from loving Robin Williams, it was just a beautiful story. I remember I would pretend to be one of the lost boys and constantly quote the movie to my mother.  Not to mention John Williams' compositions are breathtaking.