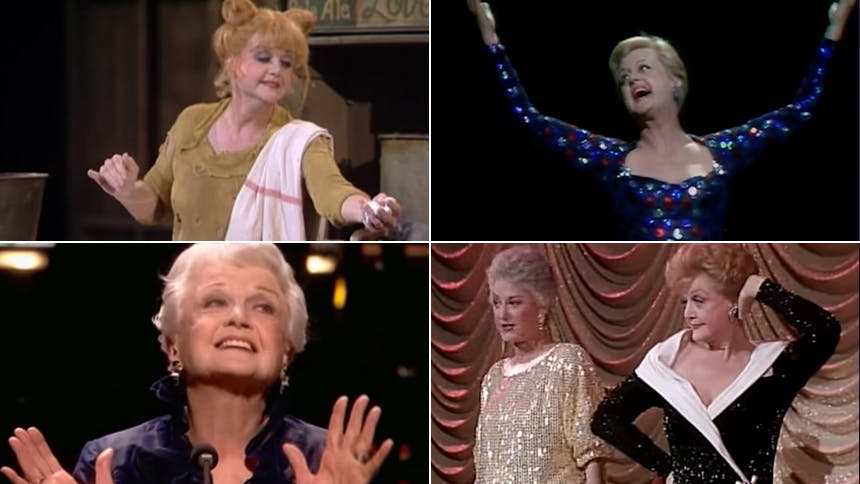 Icon of the world, Dame Angela Lansbury celebrates her 94 birthday on October 16. We bow down to the five-time Tony Award winner and Oscar, Emmy, and Grammy nominee with this round-up of a dozen essential Angela Lansbury videos.

“Everything’s Coming Up Roses” from Her Gypsy Revival


Angela picked up her third Tony Award for her performance as Rose in the very first Broadway revival of Gypsy. Here’s a look at her act one closer at the Tony Awards.


Mame Tony Award winners turned TV stars reunited at the 1987 Tony Awards (riding high on fame from The Golden Girls and Murder, She Wrote) to sing their acid-tongued Mame duet, and it’s a master class in line readings—and hip shaking.

“The Worst Pies in London” from Sweeney Todd


What would we do without these recorded versions of the Sondheim shows? And why aren’t we recording the current crop of amazing theatre for future generations? The way she moves to the music without compromising the performance is nothing short of genius.

“Thoroughly Modern Millie” at the 1968 Oscars


The three-time Oscar nominee gave us her Millie at the Academy Awards. If I had a time machine, we could hop in for her “Forget About the Boy” and “Gimme, Gimme”. Imagine how epic?

“Beauty and the Beast” Live with Alan Menken


Legends accompanying legends for the 25th anniversary screening of Beauty and the Beast in NYC. If this video of the OG Mrs. Potts doesn’t move something in your soul, check yourself.


Angela starred as a Nazi-fighting witch in the beloved Disney film from 1971, and this number remains timeless, magical, and catchy AF.

“I Don’t Want to Know” from Dear World


Angela won her second Tony Award for playing The Madwoman of Chaillot in Jerry Herman’s Dear World, and this is a preserved performance of her great big song.

All Her Tony Award Wins

A Look At Her in Blithe Spirit


Angela won her fifth Tony Award and first Olivier Award for her performance as the hilarious, scene-stealing psychic Madame Arcati in the revival of Noel Coward’s Blithe Spirit.


Have you ever seen the video where Jerry Herman’s leading ladies switch their signature roles and Angela gives us her Dolly Levi while Carol sings the title track from Mame? It’s a theatre nerd dream.

“Liaisons" from A Little Night Music at the Olivier Awards


It was a toss up between this video or Angela's Positive Moves workout video, but Night Music was the last time she performed in a musical on Broadway, so it won out. Just watch what a master storyteller she is in this song.

“We Need a Little Christmas” with the Mormon Tabernacle Choir


Is it too soon for holiday music if it also masquerades as a birthday moment? One final Mame moment for the road.