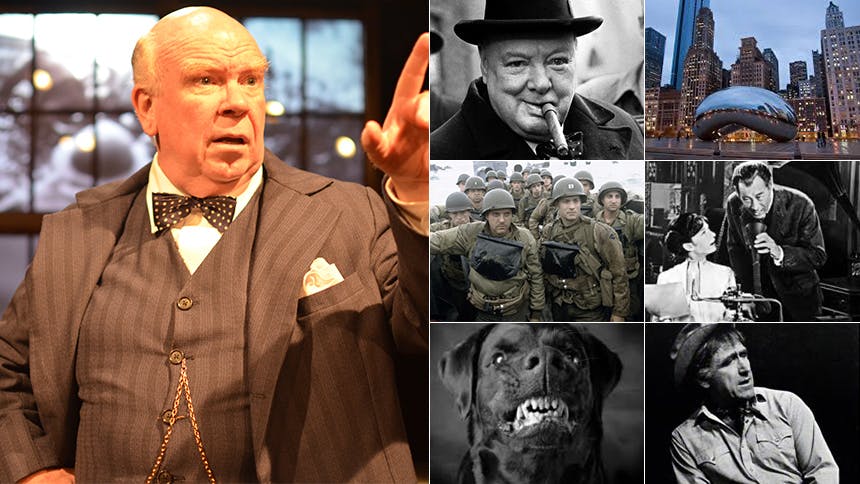 One of the biggest splashes in recent Chicago theatre comes to New York: Ronald Keaton’s one-man-show about Winston Churchill titled Churchill. It’s the first big project from Keaton’s (a beloved and respected Chicago performer) new company SoloChicago and the critics raved, the audiences leave in awe, and now Keaton is talking to BroadwayBox about the man, the myth, the legend and appeal of doing it alone.

1. Most surprising thing I learned about Winston Churchill:
We all associate Winston Churchill with the ascendant, commanding presence of World War II. To be honest, my research taught me how surprisingly sensitive he was. He suffered from depression (he called it his "black dog") and could cry at a moment's notice on anything that touched him —good or bad. It can be argued that his fight with the black dog is the very thing that compelled him to such greater heights than most of us might imagine.

2. My favorite WWII-set film is:
I have two: From 1998—Spielberg's Saving Private Ryan...those first 20 minutes are among the most riveting in all film... and 1967's The Dirty Dozen, a stereotypically guy's film that nevertheless is exciting and teeming with great character ensemble work. It was also the only movie that my father ever took the family to.

3. The part of British culture I’m most fascinated by:
The endless myriad of dialects in the country. I pride myself on dialect work as an actor, and most of the time, I've been accurate, I think. Henry Higgins is a role I'll never get cast in, but I identify greatly with the man's predilection.


4. Solo show I’ve seen that will always stay with me:
The first professional theatre I ever saw was in December 1970—the great James Whitmore's Will Rogers’ USA at the Auditorium Theatre in Chicago. I was absolutely fascinated by this man twisting and turning and cajoling his audience into following along the trip through Rogers' milieu. And it planted the seed early for me. I'm just sorry that it took me so long to act on it. It's not all I wish to do, certainly. But these days, it feels like an old friend that I just met.

5. In my opinion, the biggest difference between Chicago theatre and New York theatre is:
The difference between Chicago and New York for me is twofold. First, I do find the Chicago creative spirit of actually getting in-your-face and making you pay attention, to listen and learn, is the great advantage that the collectivity there has over any other city in the country. But the more highly developed attitude of professionalism in the business itself here in New York—like no place else in the world—might never be surpassed. The ideal thing for me is a happy medium. I'd dearly love to go back and forth with projects for our theatre, SoloChicago Theatre, that continue to approach the high quality of what I've observed here so far.

6. If I could ask Churchill one question, it would be:
…a question that I think I already know the answer to: "Mr. Churchill, why show only one side of yourself to the world? Why not share another once in a while?" Churchill was a Victorian man in a 20th century world; it was totally against his nature to admit defeat in public, to show vulnerability because he thought that doing so was a weakness. I hope I'd be wrong. Discovering his humanity in our work has been the great pleasure of my professional life.

7. Most challenging and most rewarding part of the solo show experience:
Most challenging by far: eight shows a week ALONE. Especially on two-show days, I admit it...and it kills me to say it. I'm in better physical shape now than I've been in years; the obstacle is always that second show on Saturday night. And there's no one to get a beer with when the show is done....

Most rewarding: Looking the audience right in the eye and drawing energy from them. And knowing that eventually, they'll get in the exchange too, and talk right back. Doesn't matter how—verbally or with their eyes. It juices me every night.