Five Absolutely Essential Videos from Broadway's Stars in the Alley 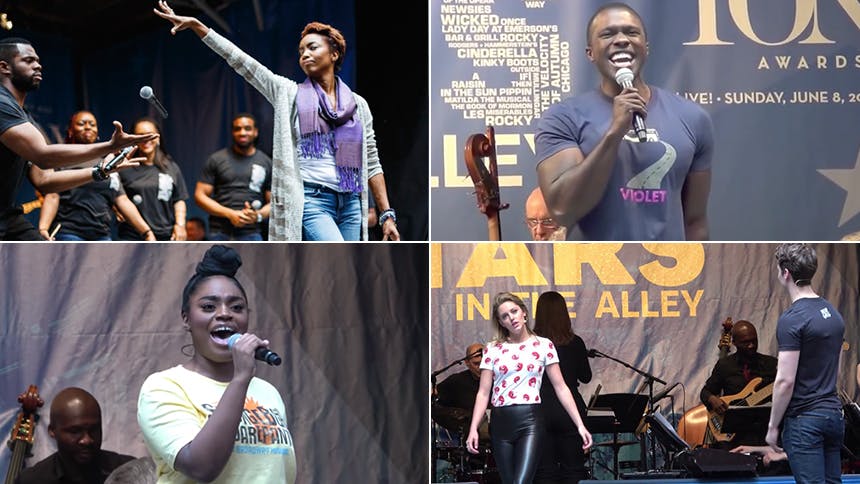 Mark your calendars and hope for sun because this Friday is the annual, epic Stars in the Alley concert. The free outdoor concert begins in Shubert Alley at 1PM on Friday, May 10 and features Tony nominee Alex Brightman (Beetlejuice) as the host, as well as performances from the stars of The Prom, Hadestown, Tootsie, Oklahoma!, Waitress, Dear Evan Hansen and Be More Chill. In anticipation of this year’s Stars in the Alley concert, here are five performances from previous years that you should not only watch but commit to memory.

1. Heather Headley Slays a Sultry “Push Da Button” from The Color Purple in 2016.


Remember when the Tony winner debuted her Shug Avery at Stars in the Alley, and the only possible way to end it was a legit mic drop? It’s very that. I could talk all day long about the boss lady hop she does into that ending at 3:29. That’s the thing about Stars in the Alley, you can have an unexpected, religious 4-minute experience there.


It’s clear to see why this man is a three-time Tony Award nominee (one of which was for this song/show). He excludes joy from the jump, and the vocals are fire. This is a top tier Joshua Henry video (beyond the way his arms look in the shirt) for that incredible 2:12-2:58 section.

3. Taylor Louderman Drops Jaws with her “Someone Gets Hurt” from Mean Girls, 2018


My gosh, Taylor Louderman makes you do a double-take with those vocals at 1:33-1:40. The ensemble is sexy and killing it (and so rarely do big choreography numbers work in this venue). Taylor is effortless at 2:40—even Regina George would have to be jealous of her in this moment.

4. Jai’Len Josey and Brian Ray Norris Brought The House Down with “Daddy Can You Hear Me” from SpongeBob SquarePants, 2018


Yes, it’s a crime that Brian and Jai’Len never got to properly record their showstopping SpongeBob duet, but at least we have this. When Jai’Len starts at 0:48, it soothes the soul. Then she nearly stops my Broadway-lovin’ heart at 1:54.

5. Carmen Cusack Is the Summer Sun Personified as She Sings "Way Back in the Day" from Bright Star, 2016


This is why Carmen is queen. How do you not gasp from 1:42-2:02? She nails every sing note, she is acting every beat, and she loses herself within it. You can’t help but smile and feel at peace watching her just own this moment.