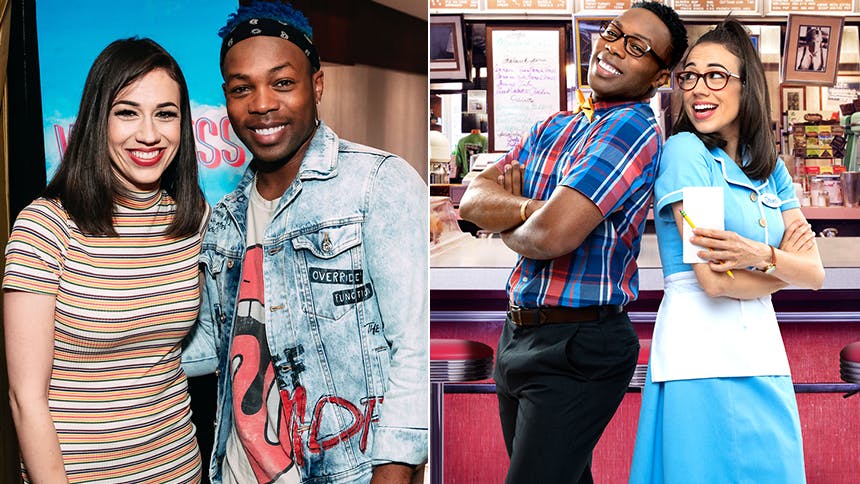 Before embarking on a world tour in October, Todrick Hall is back on Broadway starring as adorkable Ogie in the long-running hit Waitress. The singer, songwriter, and producer, who previously starred in Broadway's Kinky Boots and Chicago, shares the stage with fellow viral video star Colleen Ballinger until September 15, so hurry over to see them before it's too late.

BroadwayBox recently caught up with Todrick to talk about relating to Ogie in Waitress, embracing your differences, and life behind the scenes at RuPaul's Drag Race.

1. One of Ogie’s most endearing qualities is that he’s a huge, unapologetic nerd. What is something you nerd out over in real life?
I would say Big Brother is the big one I nerd out over. I love The Wizard of Oz. But, I'm a new super fan to the show Big Brother. You have to kind of betray some people and get a little blood on your hands to win, so it's very cool to see how the dynamic shifts from different people being in the house and being in power. And what power does to people. How many people crack under pressure is just really funny. I honestly feel like it helps me be able to navigate day to day situations, because it shows you the dynamic of how you treat people and how they respond to it. And how being nice to people or shaking the right hands with the right people can get you the job that you want. And you can do it authentically or you can do it a little bit snakeish.

I think it's so cool when I find somebody who knows things about Big Brother, which—fun fact—Colleen does as well. She might actually say the same thing. It's really cool to find people who are as obsessed with the show as I am.

2. Another signature Ogie trait is that he will go to any lengths to show Dawn how much she means to him. What's one thing you do to let someone know when you like them?
I identify with Ogie. I have been known to take people on extravagant first dates: to meet Beyoncé, to front row tickets at Broadway shows, to helicopter rides. Really, really drastic things. I'm trying to stop doing that. But, that's my love language. It's gifts. I love taking people to things that they would probably normally not do and blowing their minds. But then I think I go so full out in the first date that there is nowhere to go from there. I've decided to be more basic in the future and just give people flowers and things that regular people do.

3. I love your album Haus Party! “I Like Boys” has been the song of my summer. Tell me, which album do you think you’ve listened to the most in your lifetime? What's spoken to you about it?
Thank you. The album that I have probably listened to the most in my entire life is probably Jazmine Sullivan's album Fearless with “Lions, Tigers & Bears” on it. It would have to be that, or one of Beyoncé’s albums. But, I just love that song. I think “Lions, Tigers & Bears” drew me in because it's a song based on The Wizard of Oz. I just loved her voice. I love how passionate she sounds with every lyric that she sings. I love people who write witty music, and her songs and lyrics were super witty to me. I think that might be the album that I've played more than any other album in my life.

4. What is something that most of us RuPaul’s Drag Race fans don't realize about the way the show is filmed?
One thing that people don't realize is that all those things that they say when they're walking down the runway are just made up—they legitimately come up with it on the spot. You just jump in. It blows my mind. And if you notice, I always get very silent and go on vocal rest during that part, because I'm so intimidated by the wit of Carson Kressley, RuPaul, Michelle Visage, and, at the top of the list would be, Ross Mathews. They're so quick! I always thought that there were writers doing it, or that they came back and did voice overs later. But no, it's on the fly. Which makes it so much more impressive.

5. The online community you created is so special. What's one piece of advice you would give to someone who dreams of creating a community through content?
I would say be unapologetically yourself. Don't be afraid to show people when you're failing, because people who are failing and who are going through rough times like to see people that they respect going through rough times as well. It makes them more accessible and more relatable. It helps people realize that you're a human being. And that even though you're an artist and someone that they look up to and idolize, you sometimes might need your fans and supporters to support you too.

I’d also say try your hardest—even though it's the most difficult thing in the world—to not compare yourself to other people. Because the one thing that makes you different is the one thing that makes you special. Sometimes it’s hard for people to realize that, but when they do that and they embrace it, it just changes the entire game. It can take a regular person who's super talented and turn them into a superstar.