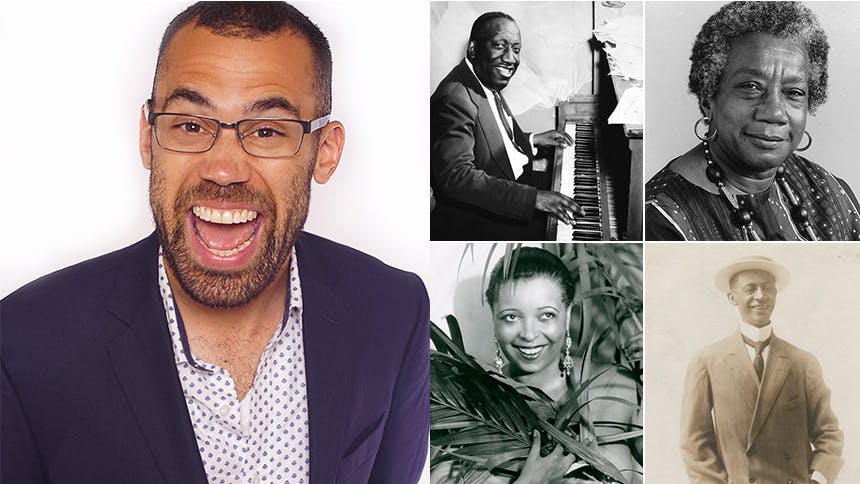 Theatre historian and founder of UnsungMusicalsCo., Ben West is back off-Broadway with the second installment of his The Show Time Trilogy, the new documentary musical, 45 Minutes from Coontown

. A live-action documentary musical created, written, and performed by Ben (and featuring over 30 songs!), 45 Minutes from Coontown traces the history of black musical theatre from the late-1800s through 1999, and will play only five performances September 12 through 15 at The York Theatre Company’s Theatre at Saint Peter’s.


In anticipation of the new show, Ben shares with us five fascinating facts most musical fans might not know about the history of black musical theatre.

1. The Stomping Ground of Jazz Greats


Duke Ellington, Jimmy Johnson, and Fats Waller may not be names commonly associated with the American musical, yet each scored a smattering of stage shows over the course of his illustrious career. Each also spent a significant portion of his early years composing—and, in some cases, performing— titillating jazz tunes for trendy black floor shows and revues in the 1920s. “Jig Walk,” “Charleston,” “Ain’t Misbehavin’,” and “Honeysuckle Rose” are just a few of the popular fruits of their collective Jazz Age labors. But Ellington, Johnson, and Waller were not alone. Among the many jazz musicians who made the musical stage their stomping ground in the 1920s are Eubie Blake (“Memories of You”), Porter Grainger (“Tain’t Nobody’s Business if I Do”), Donald Heywood (“I’m Coming Virginia”), Maceo Pinkard (“Sweet Georgia Brown”), and Lucky Roberts (“Moonlight Cocktail”).

2. The Father of Black Musical Theatre


He was the remarkable visionary behind A Trip to Coontown, the first legitimate musical comedy written, staged, produced, and performed by African American artists, and the driving force behind both The Shoo-Fly Regiment and The Red Moon, two groundbreaking early black musicals. He was an ambitious and skillful songwriter whose turn of the century song hits include “Under the Bamboo Tree” and “Oh! Didn’t He Ramble.” He was a vaudeville headliner who twice played the Palace in London. He was a dancer, a musician, a director, a comedian, a dramatist, a craftsman, a pioneer, a star. As black author Lester A. Walton remembered, “Bob Cole was the most versatile and gifted colored artist on the stage, and his dominant thought was to elevate the race to which he belonged.”

3. The Power of the Plantation


Throughout the 1920s— and into the ‘30s— gin-stripped, jazz-soaked supper clubs reigned supreme. These intoxicating destinations for New York nightlife— many of which were housed in Harlem—capitalized on (or, perhaps, exploited) the aural revolution rocking the country and the African American artists who fostered and embodied the new sound. Of the many outfits featuring fashionable black floor shows, the Cotton Club was undoubtedly the most iconic. But, opening a full year prior to the famed Harlem establishment in February 1922 and located in the Winter Garden building at the corner of Broadway and 50th, the most influential of nightclubs may well have been The Plantation. Its inaugural floor show proved so successful that it immediately transferred to Broadway that summer as The Plantation Revue. Not only was this “spontaneous outburst of song, dance, color, and buoyant spirits” instrumental in igniting the burgeoning trend of black song-and-dance revues, but the “snappy, speedy affair” also catapulted the careers of its star, Florence Mills, and its (white) producer, Lew Leslie. Over the next decade, The Plantation would continue to pack a sizable punch, with Ethel Waters and Josephine Baker climbing up the club’s ladder to stardom in 1925, and Duke Ellington holding court in 1926, more than a year before his now legendary Cotton Club residency. Though it may have been overshadowed by a handful of other heavyweight hotspots, The Plantation was a clear trendsetter and an undeniably powerful incubator for African American talent.


In the early-1900s, there was a very clear color line both in American society and on the American musical stage. Yet, several early African American authors successfully broke through these—and other—barriers, paving the way for future generations. A handful of these intrepid individuals even went so far as to pen complete scores for white Broadway musicals. They include: Bob Cole, Rosamond Johnson, and James Weldon Johnson (In Newport, 1904); Henry Creamer and Turner Layton (Three Showers, 1920); and Alex Rogers and Lucky Roberts (Go-Go and Sharlee, 1923). Elsewhere, in 1904, Will Marion Cook composed the score for The Southerners, one of the first major interracial productions on the Broadway stage. In its review of the George Lederer production, The New York Times reported, “When the chorus of real live coons walked in last night at the New York Theatre, mingling with the white members of the cast, there were those in the audience who trembled in their seats as if expecting an explosion.”


In the post-Civil Rights ‘60s and ‘70s, one of the most vibrant voices in the American musical theatre was that of Vinnette Carroll. “It never occurred to me when I started to direct that I was black and female and therefore couldn’t do what I wanted to do,” Carroll once confessed. “If you believe in something, you go after it.” And so, she did. Specializing in black identity musicals rooted in and reflective of the social politics of the period, Carroll conceived and directed such provocative, of-the-moment productions as Don’t Bother Me, I Can’t Cope, Your Arms Too Short to Box With God, and Trumpets of the Lord. Of her soulful theatrical endeavors, Carroll once explained, “Every time out it’s got to be something that makes them come out of the theatre proud to be black. I don’t want to contribute to any negative images. I want to show black people there’s dignity and beauty in our art. That’s my goal.”

Check out Ben West in ‘45 Minutes from Coontown’ at off-Broadway’sTheatre at Saint Peter’s September 12-15.