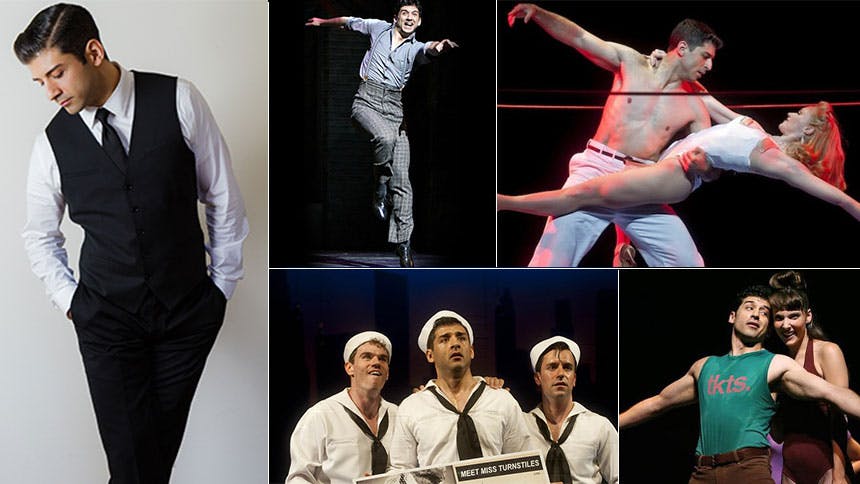 Tony Yazbeck has been dancing on Broadway since he was 11 years old, making his debut as one of the newsboys in Tyne Daly’s Gypsy. He’s gone on to star as Billy Flynn in Chicago, Al in the first ever A Chorus Line revival, Tulsa in Patti LuPone’s Gypsy and this fall he leads the big Broadway revival of On the Town as Gabey. But before he wows the masses at the Lyric Theatre, Yazbeck is keeping it intimate and dancing up a storm at 54 Below with his phenomenal new solo show The Floor Above Me.

Below, BroadwayBox chats with Yazbeck about both exciting shows, his October wedding to Singin’ in the Rain co-star Katie Huff and the lessons he learned from his Mama Roses.

1. Hearing your dancer story in The Floor Above Me, I couldn’t help but immediately think of those wonderful A Chorus Line stories. You played Al, but whose story on the line did you most relate to?
Mike. And I went in for Mike; I fought to audition for Mike and they really didn’t want me—they wanted to see me for Al. And I was like, ‘No I’m Mike.’ And I go in there and they finally let me audition for Mike and Al, and I was like, ‘Yeah, but I’m here for Mike’— growing up a tap dancer, that's who I thought I was. I went in there, choreographed a huge tap routine for Baayork Lee, Bob Avian and Jay Binder and I did the song, and I nailed it; and they said, ‘Ok, can you do the Al stuff?’ And they got really excited about Al, and I did the Al stuff and they were like, ‘That was brilliant.’ And I thought, ‘But I worked on this for three weeks!’ And I end up doing Al and I realized, ‘Oh this is who I am now as an adult. I’m a man who wants to support his wife and sing these beautiful lines,’ but growing up I was Mike.

2. So you are getting married the same week On the Town opens on Broadway, how is that possible? How do you juggle it?
Yeah, I am getting married on October 20; it’s insanity. [On the Town opens October 16.] The reason is Howard Kagan, our producer, gave us off Sunday and Monday, which is very rare; so I said, ‘Honey, let’s get married. We can do the rehearsal dinner and the wedding. It’s going to be rough and it’s going to be stressful but let’s do it and we’ll honeymoon next year.’ She’s very good at being organized—I’m not as good, but she balances me out in that way.

3. Speaking of On the Town, where’s your favorite spot in the city? What’s your New York happy place?
I always feel like I’m privileged when I can find a spot in the Hell’s Kitchen/Times Square area I don't have to pay to sit at. So bizarrely enough I’ll get done with a big project in Midtown and I’ll go to the 8th floor of the Marriott, and I’ll just sit there and relax and get organized; and I always feel like no one else knows about it. And maybe Café Edison because when I go there I still feel part of major history.

4. What’s the best lesson you learned from each of the Roses you worked with in Gypsy, Tyne and Patti?
They are very different; I learned a lot from both of them. From Tyne, I learned how to work alongside people with grace. She was the consummate performer and just an incredible person. And Patti gave me boldness—a knowingness of how to do what I want and get what I want and still work alongside people.

5. What’s the dance sequence you watch or YouTube when you’re looking for inspiration?
What I do a lot that makes me really happy is watch Gregory Hines in the movie Tap, and I’ll fast forward to right when they start the challenge sequence with all the old school tappers. And you watch them do this eight-minute scene where they literally just tap and tap, and you know they are just improvising. And I watch it and I say, ‘Ok, I’m good now.’

Feinstein's/54 Below
Best Priced Tickets
Newer
Is There a Chance Judy Kuhn Could Repeat the 1986-1987 Broadway Season?
Older
Phoenix Director Jennifer Delia Addresses Her Critics as She Explains the Yoga Scene, the Background Art & More
Sign up for BroadwayBox Discount Alerts