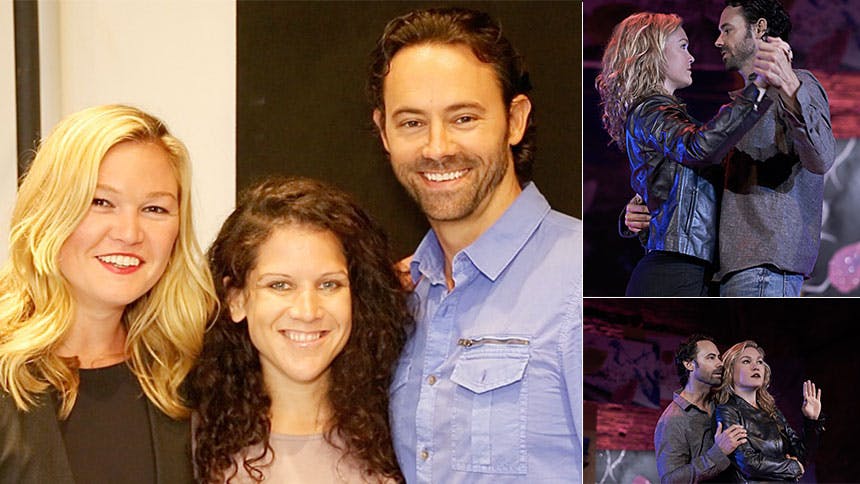 Julia Stiles’ Sue and James Wirt’s Bruce might not make much sense together on paper, but thanks to drinks, trivia, an expired condom and an unexpected pregnancy, these two characters are joined together in the new off-Broadway play Phoenix. Despite the play’s charm, critics did not hop on board when Phoenix opened at the Cherry Lane Theatre on August 7.

“Has No One Associated With Phoenix Ever Seen a Play Before?” —Jesse Green, Vulture

“In the first scenes, a lot of the dialogue feels uncertain…That presumes that the director Jennifer DeLia lets Ms. Stiles stay still. The program announces “Phoenix” as Ms. DeLia’s Off Broadway directorial debut. Many of her choices are crude, like having lights darken or brighten when a character suddenly mentions the time of day, or having Ms. Stiles pull on a sundress without taking off her nightgown first. And then there’s Burton Machen’s scene painting. I’m reliably informed that Mr. Machen is a real artist, but if you told me he was a middle schooler with a thing for glitter and poster paints, I’d believe that, too. It’s worryingly unclear where many of the scenes are set (a bar, a coffee shop, a street corner) and why Ms. Stiles has been encouraged to turn cartwheels or perform yoga moves during several of them.” —Alexis Soloski, The New York Times

BroadwayBox has exclusively obtained an essay in which Phoenix director Jennifer Delia addresses some of the harsh criticism, explains her views on art and helps readers navigate a play that remains misunderstood by New York critics.

Phoenix the play by Scott Organ is one that truly brings out the absurdity of life's interactions by opening the play with Sue meeting Bruce, per her request for a second date.

She tells him she had a great time with him on their first encounter four weeks earlier as they then engage in banter that's fun and flirtatious, to be followed by her "bearing in mind all that I said, I can't see you anymore." This could easily be perceived as incredibly manipulative, especially as she tries to run away before letting him know that she is carrying his baby as a result of their "bestest-not-quite-date-ever" aka one-night stand.

We, as the artists, decided not to run away from the off-the-bat absurd nature of the first scene. If the interaction between Sue and Bruce feels awkward, that's because it is. No one breaks up with someone after just one "not-even-date" unless they're extremely imbalanced. What we found lovely and endearing about this play is that there is real human emotion underneath the words and also a lightness that we can interpret as a way to say "let's not take ourselves so seriously all the time."

To me, art is about exploration and experience. I feel that all humans, whether they want to admit it or not, relate to saying one thing but then behaving the opposite. We all go through periods of uncertainty and unintentional emotional manipulation. We could have easily just had two people sitting and talking throughout our play but instead decided to create a sort of playground for these two highly-sensitive individuals to explore within. These individuals are Sue and Bruce, the characters, but also Julia and James, the actors. We made choices which were 1 - let's keep the show on its feet when and where we can so that when there's stillness, there's real impact (as nerves in life are true & we are not always still when we interact and if we are, we don't always want to be); 2 - let's allow the environment to be slightly abstract rather than spoon fed; and 3 - let's make it as emotionally authentic as possible. Audiences seem to love and to be grateful for those 3 choices given their realization that without those choices, it would be two people sitting at tables having extremely absurd conversations for 80 min.

There is actual art as the backdrop and the art is intentionally childlike because it's representative of the inner-child and a sort of innocence, as each piece reflects a symbol from the story whether it be the Grand Canyon (representing vastness and letting go of ego) or a portrait of Sue (representing her inner conflict), and so on. These panels tell their own story whether as individual pieces or together as a whole, and that story is what's underneath the words of the text. It's simple, though, it's just really about highlighting the emotions of the characters.

Other choices in question, 1 being 'why does Sue do yoga?' Simple answer: who in NYC doesn't? Very few, in fact. She is going through a stressful time and is hearing things on the phone with Bruce that make her uncomfortable. As a New Yorker, someone on-the go, a person managing intense emotion, this is what she does in stressful moments. Why does she do a cartwheel? Again, simple: because she wants to. She is feeling seduced by Bruce in the third scene and more open, less guarded, and is able to get out of her own head for a moment, and play.

The transitions in between scenes are again an exploration. Julia and James never leave the stage, in essence like a movie, so hopefully one watching is learning more about the characters: how they move when they're quiet, what their intimacy feels like as you see them just before they have sex for the second time. We use color and music to support the cinematic nature of these additional scenes. We opted to not go with traditional blackouts and stagehands running around in between scenes: An experiment proven successful, as our audiences have been thankful for the fresh and fluid nature of the transitions.

In essence, we have taken a piece of material that was a blank canvas for us to infuse with life, and let these characters live and breathe in a way that may make people uncomfortable or question certain choices, but that's exactly what should happen. We have created a piece in which time and place are not the most important elements to telling the story. If one listens to the sounds in between scenes, and in some cases even to explicit dialogue, there is no question about where Sue and Bruce are located in each scene but if one is looking for a sign that says "BAR" or "EXTERIOR" then no, this is not that.

We have thought through every decision made in this not-so-conventional piece and those of us involved couldn't be more proud of our embracing the existential quest these two characters are on—as Bruce learns some of the biggest news of his life on this journey—and as Sue opens up to a man for her first time after seeing how honest and humble he is. I love that art is subjective and "cheers" to those who are uncomfortable while watching our play. And an even bigger "cheers" to the majority of our audiences who are quite sophisticated, have imagination, and appreciate the exploration of the many layers to Sue's and Bruce's psyches and, as well, to the production.

Phoenix
Best Priced Tickets
Newer
Five Burning Questions with On the Town and The Floor Above Me Star Tony Yazbeck
Older
Love, Childhood & The Fans: It’s All In the Set List with 54 Below’s Matt Doyle
Sign up for BroadwayBox Discount Alerts