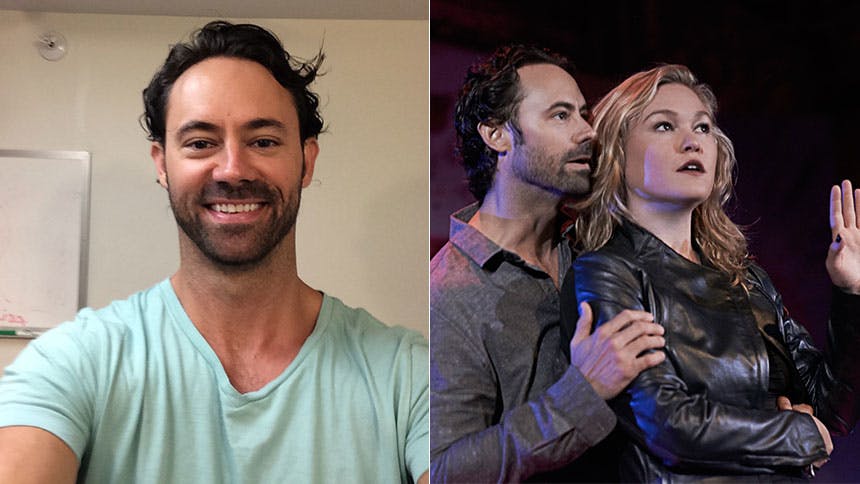 James Wirt has come a long way from working on an oil rig in Texas; the handsome up-and-comer currently co-headlines the new off-Broadway play Phoenix with film star Julia Stiles. As Bruce, Wirt is the Manhattan guy everyone wants to date: he’s witty and charming, he can cook a casserole, kick ass at bar trivia and he’ll travel cross-country to support his former one-night-stand at her abortion. In addition to Phoenix, Wirt and Stiles co-star (along with Tony nominee Lily Rabe) in the highly anticipated new Mary Pickford biopic The First, where he plays Hollywood icon Charlie Chaplin. BroadwayBox caught up with Wirt for a selfie and to hear about bonding with Stiles, his hometown of Houston, TX and the book that almost made him walk out of a job.

1. What’s the last thing you shook on in real life?
Probably when I used to trade baseball cards at Humble Middle School.

2. What’s the most memorable road trip you’ve taken in your car?
Wow, I took so many in college with my friends because Texas Tech was pretty far from everything, being it is located in Lubbock, Texas. One six-hour road trip to the Frio River was memorable because on one of our many "bathroom breaks" I decided it was a good idea to jump a fence and chase after a hundred head of cattle. I ended up falling face first in a cow patty, but I did manage to make the cows run.

3. If you could time travel, where are you going?
Assuming that I would only get one time travel trip, I would travel back thirteen years ago and save a couple of my closest friends lives.

4. What do you and Julia bond over offstage?
A vodka soda:)

5. What’s the Charlie Chaplin movie everyone has to see at least once?
Chaplin's first full-length feature film The Kid. It's a very funny film and also very touching.

6. If you had to explain the plot of your film Billy Bates in a tweet (140 characters):
On the verge of becoming a famous contemporary artist, Billy’s hyper-sensitive mind and colorful soul are haunted by the abandonment of his mother and also by the abuse from his envious father.
Billy, intellectual and poetic, eventually meets Kaia, a beautiful singer who seems to understand exactly who Billy is.

7. What are your desert island film, album and book?
My film would be Fight Club, album would be Hot Rocks by the Rolling Stones, and book would Narcissus and Golmund by Herman Hesse. Love that book, I almost walked out of a job I had right when I finished it. I was thinking, "F*@K this I am an artist!"

8. If someone only had 24 hours in Houston, TX, what do we have to do?
Grab lunch at Goode Company BBQ then drive to Galveston to hit the beach and be back for magic hour to chill out on El Tiempo's patio and enjoy their fantastic TexMex food and margaritas.

9. What fictional character (TV, film or literature) do you most relate to?
Christopher McCandless from Into to the Wild.

10. If you had a theme song, what song would you use?
"Loose Yourself" by Eminem.

See James Wirt and Julia Stiles navigate the dicey waters of a relationship in ‘Phoenix’ at the Cherry Lane Theatre through August 23.