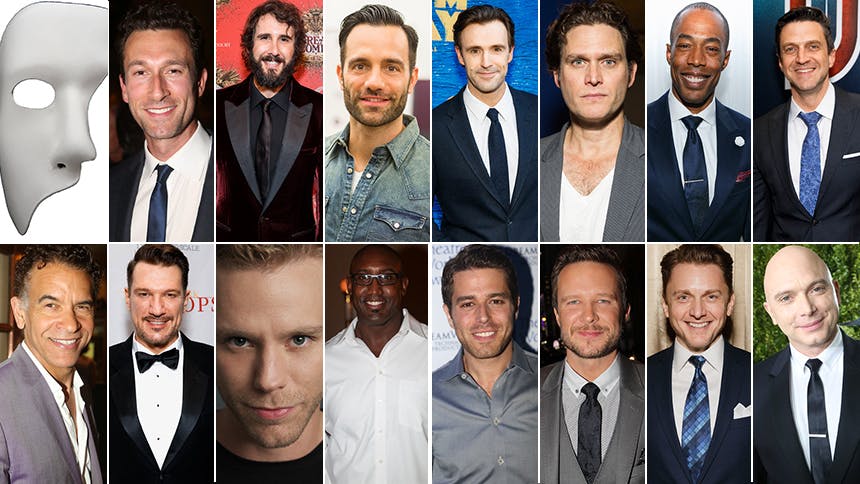 The longest-running show in Broadway history, The Phantom of the Opera

is gearing up to celebrate another landmark: 30 years crashing chandeliers at the Majestic Theatre. It's been announced that Ali Ewoldt and Rodney Ingram will remain on as Christine and Raoul but the titular character remains a mystery. Scroll on for 15 Broadway stars (presented alphabetically) we'd love to see take on the Phantom for the epic 30th anniversary year—and since it's such a B'way milestone, we thought go big or go home.


New York audiences love when this two-time Tony winner wraps himself around a dark, twisted role. He would be a Phantom that could strike fear but also show the hurt and pain underneath.


The TV and stage star has the pipes and an edge we haven't really seen in this character before. Could be an interesting way to usher in a new era at Phantom.


His voice is all the explanation you need.


The Cats and Once on This Island star sure has the pipes to make the Phantom take flight. His voice is so rich, he'd bring layers to those ALW tunes you didn't know to look for before.


He's flirted with Phantom before, and the fans would absolutely die to hear this Grammy and Tony nominee sing "Music of the Night" on Broadway.


It would be wild if Raúl returned to Broadway as the Phantom, but we can't help imagine what he'd do with that score. I'd buy premium tickets in a heartbeat.


Give the fans what they want: Ramin on Broadway as the Phantom. The Tony nominee played Phantom in Love Never Dies and London's 25th anniversary gala, but never in America. Why not let him help Broadway's Phantom turn 30?


Aaron Lazar is quite open that he'd like to join the elite club of Raouls that make the jump to Phantom, and it seems crazy that he hasn't yet. And let's be honest: Who wouldn't want this hunk haunting you?!


McElroy (a Tony nominee for Big River and the star of Rent, the original Violet and more) is due for a big Broadway return in a leading role. His voice is so special and hearing him do "Music of the Night" would be everything.


The real question is how has Tony winner Brian Stokes Mitchell not played the Phantom yet in the last 30 years?! That voice on this score, DONE!


It's long been Pascal's dream to don the iconic mask, so why not let this Tony nominee take center stage for the big anniversary? Bring Phantom back to its rock star roots with Pascal's one of a kind vocals.


Why not a sexy, young Phantom with the voice of an angel? He can go right from Junk into Phantom. #AngelofMusic


The Tony winner for South Pacific is a trained opera star and would bring such an authenticity to the proceedings. Plus, imagine that voice soaring through these big numbers!

He just gave us a preview of his Phantom in Hal Prince's Prince of Broadway and it was wonderful. Let's see what this former Raoul can do as a full-time Phantom.


Young gave a breakout Tony-nominated performance in Lloyb Webber's Jesus Christ Superstar revival, and he needs another leading role that shows just how special his voice is. Phantom could be just the ticket.

Don't miss the record-breaking musical phenomenon 'The Phantom of the Opera' at Broadway's Majestic Theatre.