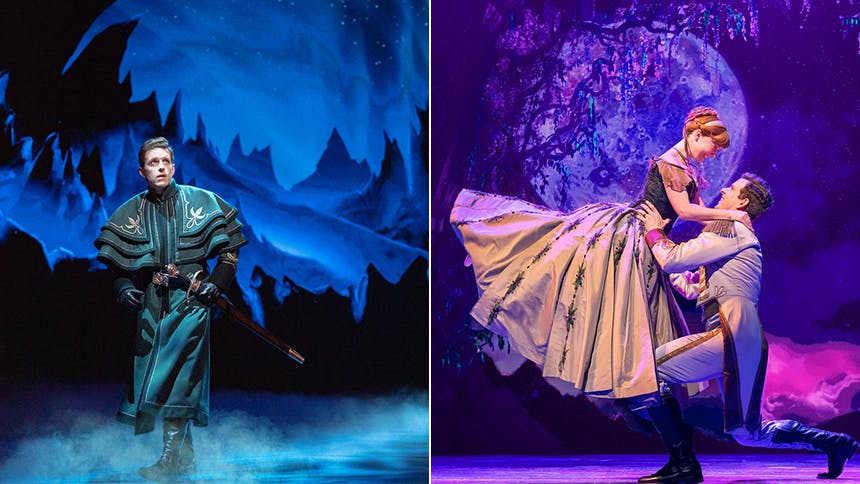 Joe Carroll stars as the duplicitous Prince Hans (the 13th son of a king of a very small kingdom on the Southern Isles) in the hit Broadway musical adaptation of Disney's Frozen. He's previously appeared on Broadway in Bandstand, Cinderella, Once, and Romeo & Juliet, and now he brings his soaring voice to the Frozen duet "Love Is An Open Door".


Scroll on as BroadwayBox talks with Joe about making his Disney dreams come true in Frozen, his take on Hans' evil arc, and being a guy who loves musicals.

1. What do you love about playing Hans delicious Frozen arc? Do you try to drop clues for the audience about what’s to come or do you not tip your hand until that big, final moment?
*SPOILERS AHEAD!* I get this question a lot and, YES, it's so fun to be the bad guy. I really try to have there be no inclination that he has ulterior motives whatsoever because, in my opinion, he doesn't...until he REALLY does. The idea that people are born evil or become evil as the opportunist in them takes over is a really interesting idea to me. When does someone turn to the dark side? How do they get to the point where they are convinced what they are doing is right even when it is so wrong? I think Hans knows that there is going to be a long road to power until he sees his opening as Anna dying of a frozen heart and he sees his opportunity for power.

2. Which Disney movie or character was your jam growing up and why? Is it wild to think you are now part of the Disney legacy?
I loved them all. I absolutely loved the old-school Robin Hood: "Little John and Robin Hood running through the forest Oo-De-Lally Oo-De-Lally golly what a day"—it's stuck in your head now isn't it? I loved Hercules and Aladdin and Beauty and the Beast...ALL of them. It's truly amazing to think I'm part of the Disney legacy. I think 10-year-old Joe would be proud of me.

3. What does it mean for you that the short-lived musical Bandstand lives on thanks to the incredible filmed version? Do you have a favorite scene from that live recording?
It's the greatest gift. I spent three years developing that show and to see it close so quickly was such a bummer. We were thrilled that it got to Broadway in the first place—because even getting to Broadway is a feat—but to see it go was hard. I LOVE that it lives on. People tell me at the stage door almost every day that they love the film. I so loved watching the film and being able to see the intricacy of everyone's work that I didn't get to see when I was behind the drums. I missed so much from the back, but I also had the best seat in the house every night.

4. On Broadway, you’ve replaced into Once and Cinderella. What surprised you most about your experience joining the company of Frozen? How was this experience unique?
I loved both of those shows so much. Once still holds such a special place in my heart, and I could on and on about that—maybe another time. The most unique thing for me here? I mean it's DISNEY! We went to Disneyland for a press event back in June; I get a paycheck with a mouse on it; it's amazing to be a small piece of the organization that shaped my entire childhood.

5. You have a podcast, Guys Who Like Musicals. Here’s a musical theatre speed round.
THANK YOU FOR THE SHOUT OUT! We're having so much fun with the podcast. It's silly and we love talking to people we love in the theatre community.
—First musical you were obsessed with: First were the Disney movies. I think The Little Mermaid was the very first, then Les Mis. Monday I was Marius, Tuesday I was Valjean, Wednesday I was Eponine...
—Cast recording you’ve played out most: Passing Strange. I know almost every word. If you don't know it check out the Spike Lee filmed version!
—First musical you were great in: I was "great" in?! I think the first (and last) was as News Boy #1 in Annie when I was 8. "Extra! Extra! Read all about it!" It was transformative.
—Dream musical role: George in Sunday in the Park and Guy in Once. I covered him for the last few months I was in the show on Broadway, but I never got a chance to perform the role.
—Musical theatre legend you’d geek out over meeting: I know you said speed round, but this is one of my coolest moments. I saw Stephen Sondheim at the bar at The Glass House on 47th street. I was waiting for a friend and I saw him sit down. I told the bartender, "I'd like to buy him a round". I bought his drink and he came over and thanked me. I forgot my own name. He then told the bartender, "We'll have two filet mignon and a bottle of Champagne on this young man's tab". He was joking. I think.
—The “perfect” musical: Once. I could elaborate, but again...that's for another time.