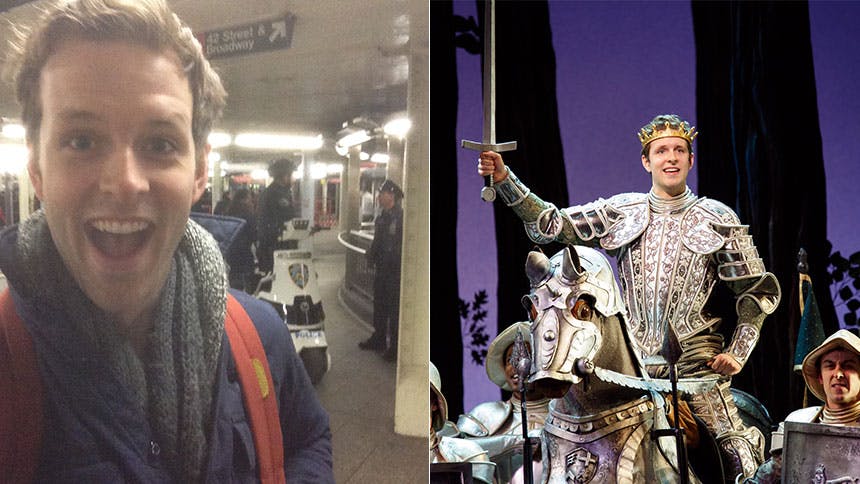 Forget Prince Harry, the new royal stealing our hearts is Cinderella’s Joe Carroll. The Michigan native leads the Tony-winning musical revival as Prince Topher; and while he may not be a prince, Carroll is definitely charming. This week, Carroll shares with BroadwayBox why he follows Pooh Bear on Twitter, the Julia Roberts film he knows by heart and some of his #90sProblems.

1. If I were a prince, my first royal decree would be
Well, Alan Jay Lerner already decreed this, but given the New York City winter this year I would say, "The winter is forbidden 'til December and exits March the second on the dot, and by order, summer lingers through September." I would also make kindness toward others a law, like wearing a seatbelt. Good luck pushing someone on the subway when everyone is wearing their kindness seat belt.

2. My favorite fairytale growing up was
Beauty and the Beast and the Winnie-the-Pooh stories. I still follow Pooh on Twitter; I'm serious. His one-liners will brighten anyone's day.

3. Another Rodgers and Hammerstein leading man I’d love to play
Right now Lt. Cable in South Pacific. I think "You've Got to Be Carefully Taught" is one of the most important songs ever written across any genre of music. The fact that Hammerstein was able to put to music the way a person is instilled with the ability to hate is truly extraordinary and timeless across generations. Eventually, I'd like to play Billy Bigelow in Carousel, but I need to grow up a bit more.

4. My favorite onscreen romance is
Don't tell my buddies, but Hugh Grant and Julia Roberts in Notting Hill. I have a soft spot for chick flicks. I can do all of Hugh's opening voice-over...

5. Growing up I wanted to be
An orthopedic surgeon. I had a lot of nasty sports injuries growing up and I wanted to be able to fix broken athletes. And I wanted to be a drummer, specifically for Paul McCartney or Blink 182 (this was the '90s, remember). And a ski patrol out west... and a professional hockey player ... wait, what was the question?

6. My dream vacation would take me to
If we're dreaming here probably an around the world adventure. I love to travel and there are a million places I want to see. Probably start in Scotland to play golf, the south of France, the Amalfi Coast, Egypt, Tibet, China, a bike trip through Thailand, dive the Great Barrier Reef, and finally have someone teach me how to surf in Hawaii.

7. My celebrity crush is
Scarlett Johansson or Charlize Theron.

8. The most played album on my iPod is
Neil Young's After the Gold Rush. He's my all-time favorite. This was the soundtrack to my childhood. If you ask me, "what was your first concert?" I would tell you it was "Crosby, Stills, Nash, and Young at the United Center,” but I would be lying. That was second. First was the Backstreet Boys. Again, the '90s.

9. If I met my high school self now, I would tell him
The braces WILL come off, the acne WILL improve, and you WON'T have to shop in the husky section forever. And CUT YOUR HAIR, YA HIPPIE.

10. My signature dance move would be described as
EVERYBODY DANCE NOW. I don't dance very often, but if you invite me to your wedding, I will make SURE everyone is makin’ moves, no matter how ridiculous they feel. I'm the king of wacky dancing at weddings.