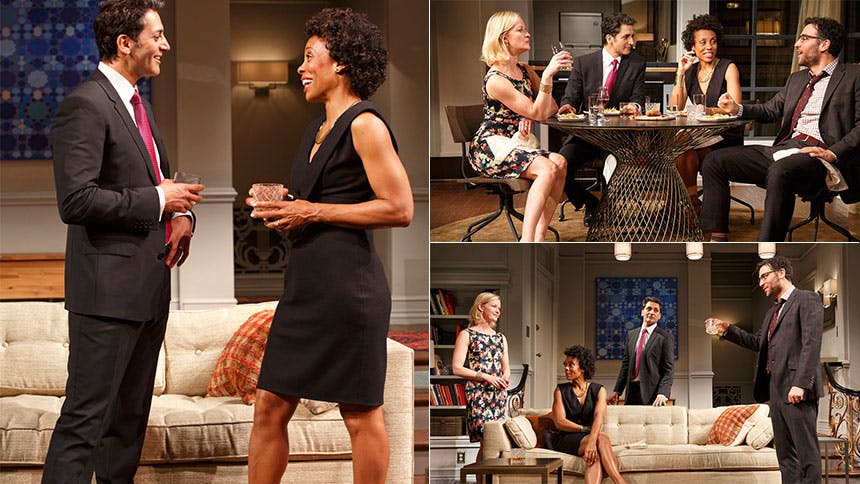 There’s no way to see the Pulitzer Prize-winning drama Disgraced on Broadway and not leave the Lyceum Theatre talking about what you just saw. And chances are every conversation is going to lead to Karen Pittman, the Broadway vet who makes a major impression as Jory—a smart Manhattan lawyer who works at the same firm as Hari Dhillon’s Amir and is married to Josh Radnor’s Isaac. Pittman gives a scene-stealing performance, making it crystal clear why she remained the only original cast member from the show’s 2012 off-Broadway production. BroadwaBox caught up with the busy New York mom to talk about how the play has changed, what people are saying after seeing it and why she pushes aside the couch and rolls up the rug at dinner parties.

1. How has your Jory changed with the addition of Josh Radnor and the rest of the Broadway cast?
There were some new things I wanted to try and explore with Jory, but in many ways the center of who she is remains the same. The funny bits are funnier with Josh because he has great timing; Hari is endearing in a different way because he has this great charm about him; and Gretchen [Mol], of course, is a very beautiful, lovely Emily and we’ve forged a great friendship onstage too.

2. What would Karen do if she were at this dinner party in real life? How would you handle it?
Yikes. I think I would be the one to say, ‘Simmer down everybody. Can we turn on some Jennifer Lopez now? Let’s push the couch and start dancing—get a Soul Train Line going.’ I like to have a little fun at parties.

3. People just want to talk about this show after seeing it; what do audience members say to you at the stage door after?
People have been opened up by this story, and they immediately identify with Jory. ‘She did what I would have done.’ ‘She said what I would have said.’ Gretchen had a friend come who was very emotional and couldn’t talk about it. My friend who saw the play was remarking on how powerful the metaphor was of Othello and Iago as seen in Amir and Isaac. The biggest thing was when an audience member came out and said to me, ‘I wasn't expecting it. I was giving up on coming to see Broadway shows until I saw this play tonight. This’s what Broadway should be about.’ It’s a great honor to be a part of a show like this; this is what American theatre should look like.

4. What’s your favorite thing to do with your children here in New York?
We love to go to Lincoln Center and hang out in the plaza. I’ve been lucky enough to work at Lincoln Center for the past three seasons, including Disgraced and Domesticated. And their thing is, ‘We are going to Lincoln Center again, Mommy works there.’ Also, my kids love a fancy dinner so we go to ABC Kitchen; then we might hustle over to the LEGO store and get a toy or two and hop in a car and go back to Brooklyn. If you’re a single mother actress in New York, it just becomes incredibly magical because you live in your actor imagination in the most wonderful way and then you get to welcome your children into this incredible, fortunate existence that you get to play out. It’s a great job; I’m very content.

5. Who is someone you would love to interview?
I’d love to interview all the wonderful and beautiful leading and character African American actresses of Broadway, including Viola Davis, Diahann Carroll, Lena Horne and Diana Sands. Just to connect and reconnect to their journey and their experiences being in a Broadway house. It’s a great gift to be working on Broadway as an African American actress, but it’s a very a small group of women that have done that over decades of time. I feel part of a very important and unique club, and I’d love to have the opportunity to pick the brains of these wonderful actresses and know their journey in relation to mine.