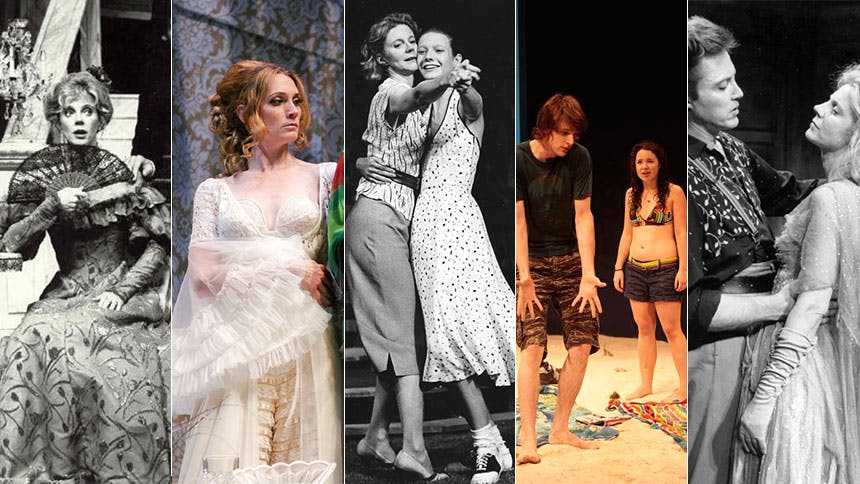 Donald Marguelies’ latest Broadway play The Country House introduces audiences to a family of actors gathering at their Berkshires summerhome during the annual Williamstown Theatre Festival. From a hot TV star to theatrical royalty, they all want to be at Williamstown; which made us think about the cast’s own WTF experiences. Below, BroadwayBox looks back at the many Williamstown Theatre Festival credits (and fabulous vintage photos) of The Country House company.


In The Country House, Steele plays the lone non-performer of the family, but it wasn’t too long ago (2008) that Steele treaded the Williamstown boards in Ellen Melaver’s Not Waving.

There aren't any actual photos of Sunjata, but he's probably in this group shot, right?


Sunjata stars in The Country House as a Michael Astor, a big TV heartthrob spending his summer working on his craft at Williamstown. The Tony nominee actually appeared there once back in 1999 in Nicholas Martin’s far out production of Tennessee Williams’ Camino Real. The cast also included Ethan Hawke, Hope Davis, Kathryn Hahn, Charlie Day and Lewis Black.


Much like her Country House matriarch, Tony winner Blythe Danner is somewhat of a Williamstown Theatre Festival icon. She’s been appearing off and on since 1974, when she made her debut opposite Frank Langella in The Seagull (which ironically enough The Country House is very loosely based off of). Now buckle your seat belts as we fly by her 21 other WTF credits.

1975, her 'Seagull' director Nikos Psacharopoulos brought Danner back opposite Langella again in 'Ring Round the Moon.'

How beautiful does Danner look in 1976 as Ellie Dunn in 'Heartbreak House' and as Masha in 'The Three Sisters.'

Photo by Jan A. Wein

In 1977, she starred as Hypatia Tarleton in Shaw’s 'Misalliance' and as Holga in Arthur Miller’s 'After the Fall.'

1978 saw Danner co-star with Rosemary Harris as Lizaveta Bogdonovna in 'A Month in the Country.'

Danner played Liza in the 1979 American premiere of Maxim Gorky’s 'Children of the Sun.'

The very busy leading lady appeared in three shows in 1980: 'Whose Life Is It Anyway,' 'The Cherry Orchard' and 'Candida.'

She scaled back in 1981, only starring in two production: 'The Greeks' (with daughter Gwyneth as Young Orestes) and 'Arms and the Man.'

Two shows again in '82. Danner appeared as Rose Trelawny in 'Trelawny of the Wells' and as Tatyana in 'Enemies.'

Longtime collaborator Nikos Psacharopoulos directed Danner in 1984’s 'The Tale of the Wolf.'

How’s this for 'A Streetcar Named Desire' cast? Sigourney Weaver as Stella, Christopher Walken as Stanley and Danner as Blanche. It was her 14th and final production with director Nikos Psacharopoulos in 1986.

Then there's a short break and Danner returned in 1990 with Christopher Reeve and Calista Flockhart in 'Death Takes a Holiday.'

In 1991 Danner stars with daughter Gwyneth Paltrow and Jane Krakowski in 'Picnic.'

The following year mother and daughter appeared together again in 'The Sweet By ‘N’ By.'

Here's Danner as Jessica MacMillan Cohen in 'If We Are Women' in 1993.

In 1994, Danner returned to 'The Seagull' but this time as Irina Nikolayevna Arkadina.

In 1996, she starred with Marian Seldes, Andrea Martin, Victor Garber and Kate Burton in 'The Royal Family.'

Danner's most recent credit at Williamstown was headlining the 2012 production of 'The Blue Deep.'