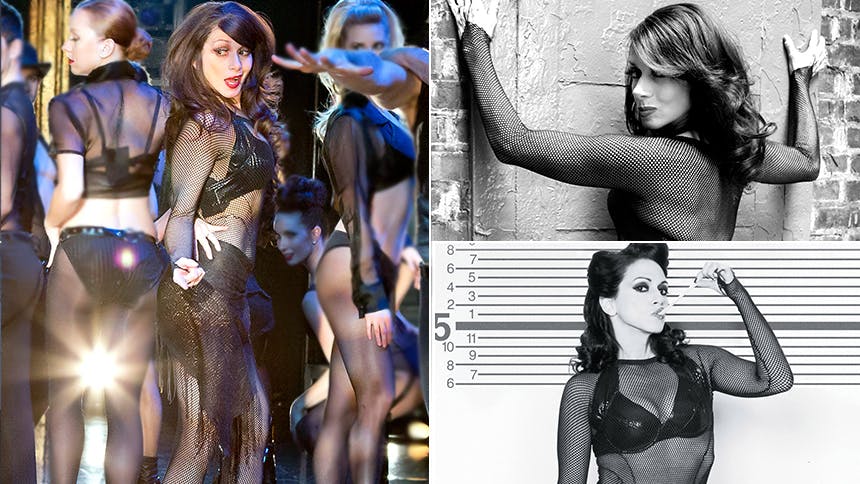 Donna Marie Asbury made her  Broadway debut at age 11 opposite Angela Lansbury in Gypsy. She went on to appear in Evita, Merrily We Roll Along, Smile, and Jerome Robbins Broadway. For the past 21 years, she’s been the standout in the iconic, Tony Award-winning Broadway revival of Chicago. She first joined the national tour in December of 1997, and then stepped into the Broadway company in March of 1999. Donna Marie plays the role of June ("he ran into my knife ten times" in “The Cell Block Tango”) and understudied the roles of Velma Kelly, Matron Mama Morton, and Roxie Hart—her Velma is incredible, and you should count yourself lucky if you’ve seen it.

After an absolutely legendary Broadway run, Donna Marie departs the production on June 3. Then on June 19, Donna Marie Asbury makes her Feinstein’s/54 Below debut in a one-night-only celebration of her career. BroadwayBox caught up with Donna to look back on her time in Chicago and her 44 years on Broadway.

1. What was your expectation of Chicago and what this job would be when you first began 20+ years ago?
I almost didn't audition for the show because I didn't think I was a strong enough dancer. (Because I had done all these singer roles like Eva in Evita.) It was literally my husband [Cleve Asbury] and my agent at the time that said, "You have to go!" So, I went without any expectation really. Cleve and I bought standing to go see the show in New York, and he turned to me and said, "What do you think?" And I said, "I don't think I'm right for either of the girls, Velma or Roxie—maybe a cell block girl?" Then we both got call backs and were both told, "No thank you." Three weeks after that, I was asked about my availability. At that time, I had already signed to do Anita ain West Side Story in Austin, Texas, so they literally had to wait six weeks for me. It was crazy.

I've been in this business since I was 11 years old, and it was the first time ever in my career that I was a replacement. I'd always started out in a show. So, I was scared to death on so many levels—I can't even tell you. But right away, it felt like this was going to be a really good fit. But if you had asked me if I was going to stay in it this long? I would have said absolutely not. I didn’t think that my body would allow me to do it this long without breaking down. I'm so grateful and so blessed. In your career, you have to do jobs that sometimes you're not proud of or you have to take because you need the check, but I can honestly say I have never not been proud of this production.

2. Why is now the time to take a step back?
When I told my sweet producer Fran Weissler, who is just lovely, she said "I want you to keep doing it!" And I probably could do it for five more years, but I would be 61 in a fishnet bodysuit. Nobody needs to see that. They just hired a man to be in our company who is 23 years old. I could be his mother! You have to be very, very honest with yourself to know when it's time to go. It was really important for me to leave on my terms and to leave when I can still be proud of what I'm giving up there. I'm not retiring! I just need a moment. I just need a moment to miss it.

3. What’s been the greatest joy of your 20-year run?
I don't want to sound like I'm tooting my own horn, but my greatest joy is that I've been able to be consistent with the performance that I've been able to give. I can literally walk away from this show and know I've given 100% every single night—even if it was hard to get out there or even if I didn't feel well. It was instilled in me at a very, very young age, watching Angela Lansbury in Gypsy, that you never get the same audience twice. You give 100% or it's time to go.

But also, I've met so many incredible people that I would have never worked with if I hadn't done Chicago. I can still say that they are friends of mine. I respect their talent so much. These people that I go to work with every night, they become your family. You spend holidays with them, you go through births and deaths, marriages and divorces. I think that's what I'll miss the most. Of course, I'll miss performing, but I will miss going to the theatre every night and having that time of just talking about your day, or talking about the audience, or talking about the person that fell asleep in the front row. All of those funny things that you can't wait to get to the theatre to talk about are not only what I’ll miss the most, but probably what I'm most grateful for.

4. You’ve seen all the major Chicago guest headliners come into the production. Which guest star were you most star-struck by initially
Brooke Shields. Without a doubt. She probably surprised me the most too because she really is a triple threat: she can sing; she can dance; she can act. She was fantastic in the show. I was also very star struck with Jennifer Holliday when she came in as Mama Morton. Getting to sing “Class” with her? I was just beyond. It was insane.
And which did you becomes fastest or closest friends with?
Brandy. She was incredible. Sometimes they pull the understudies out during the show to rehearse with whoever is coming in, and they had pulled me out to rehearse with her as her Velma. So, I was her first Velma in rehearsal, and we just had this instant connection. She is a light. She is just the sweetest, warmest person, and her instincts were right on. I love what she brought to the role. Then, through circumstances, I got to go on with her a lot, and you can't fake that kind of connection. I am so grateful for that. Honestly, I send her a text and she sends it to me right back. It's just lovely.

5. Before Chicago you worked with Sondheim and Hal Prince on their short-lived cult musical Merrily We Roll Along and Jerome Robbins on his Tony-winning show Jerome Robbins Broadway. What were those experiences like for you? What stands out most from that time in your life?
I don't think I knew at the time how lucky I was to be working with these legends. When you audition for a show and you get it, it becomes your job. You go to work and you do your best. What I remember about Hal mostly was his kindness and his generosity, because it was a really rough time. Merrily was such a rude slap in the face. We were all just left speechless because we just didn't think that this was not going to work. Then when it didn't work, and when we closed, because of Hal's generosity I got the opportunity to understudy Eva Peron at age 19.

You learn just from watching people and how they act and react to whatever situation they are put in. Watching Jerry recreate these different shows, and how immediately he could be back in that time, was unbelievable. He would accept nothing less than 150%, every single time we would rehearse.

Honestly if I hadn't had the career that I had before Chicago, I don't think I would have been able to stay there as long as I have. But I did mostly everything I wanted to do before I got to Chicago. The fact that I've been able to make a living out of something that I love for so long is incredible.

Catch Donna Marie Asbury before she ends her legendary run in ‘Chicago’ on June 3 and in her debut concert at Feinstein’s/54 Below on June 19.