May 6th, 2019
by Lauren Nicole Cipoletti 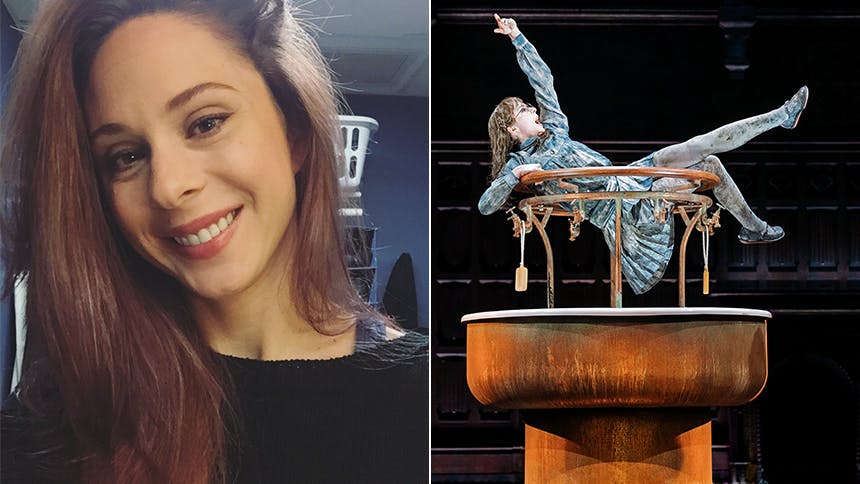 . A member of the original Broadway company, Lauren plays a several roles throughout the show, but she shines in her scene-stealing performance as the beloved lavatory ghost Moaning Myrtle. Audiences lose their minds when she opens her mouth and that voice comes out. Then she goes on to land laugh after laugh, and you find yourself completely mesmerized by this comedic turn from a character you weren't expecting to see.


BroadwayBox caught up with Lauren (who previously appeared off-Broadway in Macbeth and the musical Heathers) to talk about the secrecy around her dizzying debut, crafting Myrtle Elizabeth Warren for the stage, and praise from J.K. Rowling.

1. What was your initial reaction when you found out you’d make your Broadway debut in Harry Potter and the Cursed Child?
When I found out I was going to be a wizard on Broadway, I sat in silent shock next to my bedroom window for what must have been thirty minutes. I was so thrilled and relieved, but also couldn't tell anyone about it. We were sworn to secrecy. I called my parents and got their voicemails and only told them they needed to call me back as soon as they could. Which, now that I think about it, sounds terrifyingly cryptic. I found out in the beginning of April and I couldn't share it with anyone until the announcement came out in August. My dream had come true!  So, it ended up being a quiet kind of secret joy.

2. How did you find your Moaning Myrtle? Where did you start with her?
I was initially called in for a different character at my first audition and when I read the play and saw that Myrtle was in it, I immediately emailed my manager and asked to come in for Myrtle instead. I fell in love with her in the books and I've been mimicking that wonderful voice of Shirley Henderson's from the films since they came out. I never dreamed I could ever get paid to do it. Also, there was something about the way that it was written that I was excited by and felt I could have a ton of fun with. I love characters full of surprise, that go from A to Z or 0 to 100 in less than second. Myrtle has all of that. I care so much for her. She is just so desperate to be loved.

3. How does it feel to get such a huge audience reaction to Myrtle still a year into the run?
It's honestly absolutely amazing! I'm exceedingly grateful and still dumbfounded by it all. Playing a character that people have such strong feelings about is nerve-racking. I love making people laugh and I feel so lucky that the fans really welcomed all of us with such open arms.

4. What question do you get most after people have seen you in Cursed Child?
"Who do you play?" or "Do you ever get dizzy?" Most of the cast plays many different characters that all look completely different; myself included. The ensemble of most shows are the hardest working people on Broadway. Costumes, hair, and makeup do a fantastic job of making us all look like completely different people. So, in this instance, I find the “who do you play?” question pretty valid. Not to mention, Myrtle looks a lot like I did when I was 10. I'm thankful I don't look like that anymore.

As for “do I get dizzy?” Yes. And if you are confused, you will have to see the show to find out.

There is also a beautiful moment where Albus and Scorpius are looking out at Hogwarts the way we all imagined looking at Hogwarts growing up.

6. What three things you need for a full Parts One and Two two-show day at Cursed Child?
Coffee.
Nap.
More Coffee.

7. What’s your favorite memory from your time in off-Broadway’s Heathers?
There isn't really a specific moment. But I am so grateful for the people. I was a replacement and came in late to the run. I felt like such a fraud because I had never been in a professional production in NYC, much less a musical where people are able to dance and sing their faces off quite like that. They welcomed me with open arms and made me feel like I was exactly where I belonged. I will never forget that.

8. Now, more than a year into your run, what’s been the biggest pinch-me moment in your Cursed Child experience so far?
My pinch-me moment was right before we went out for our final bow on opening night when J.K. Rowling bowed with us. Right before we went on stage she turned, looked at me in my Myrtle costume, walked over, gave me a hug, and said "You were incredible." Then we did our final bow, I kept it together till I got to my dressing room, and then fell into a weeping puddle of joy. My dressing room mates didn't know what to do with me. It was awesome.

9. What was your gateway show? What was the first play or musical you truly loved?
Oh jeez! It's been so long! The show that made me want to be an actor was Annie. I saw the touring production in San Francisco when I was a kid and thought, “I want to do THAT!”

10. If you could access any Harry Potter spell in real life, which one would you like to master?
Transfiguration. I would want to be able to transfigure into any animal. It would be awesome!!!