Britton Smith Takes Fans Through All His Be More Chill Characters & Costumes, From Jake to Rashidra to Prince 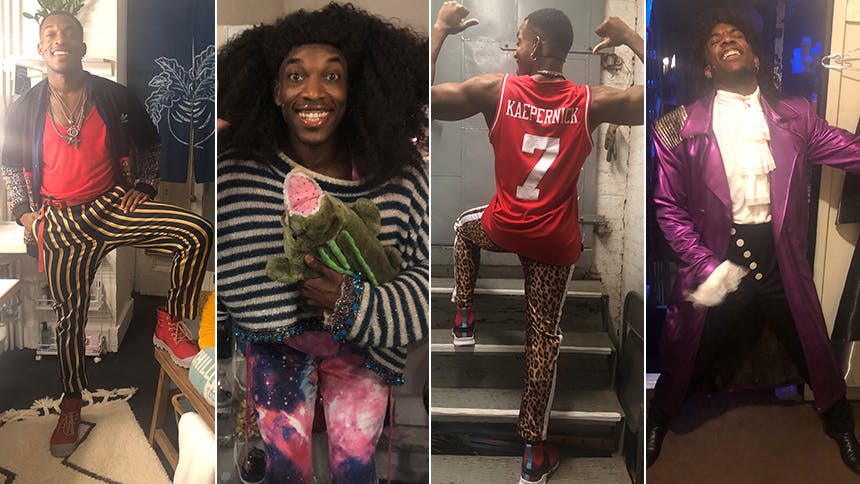 . The young actor, who previously appeared on Broadway in Shuffle Along and After Midnight, plays high school athlete and heartthrob Jake Dillinger and a variety of other memorable characters in the new Joe Iconis musical at the Lyceum Theatre.


Scroll on as Britton shares with us each of his Bobby Frederick Tilley II-designed looks in the show.

It makes me feel proud on many levels to have my character introduced in this particular costume. It was important to me that Jake be seen and heard as more than the black, tall, athletic stereotype. This Jersey honors one of the most impactful black athletes of our time and I make sure to point out this homage as often as I can.

The vibrancy and athleticism of this costume make me feel ready to get the girl out of play rehearsal and onto the bleachers.

My “Squip Song” costume feels like sweat and anxiety because it requires incredible focus and precision. It helps you to be cool though, so I wear it.

In the mall scene, I get to honor my comedic inspirations (Martin Lawrence, Eddie Murphy, and Will Smith) with my dramatic portrayal of Clarence, fifth generation mall cop.

A purple custom-made jacket makes anyone feel powerful. At the top of Act 2, it’s my party and I smile if I want to—in this Prince get up.

Let’s Hear it For Rashidra

Hey Everybody, have you heard?... Ladies and gentlemen, it gives me great pleasure and honor to introduce to you Rashidra Michaels.