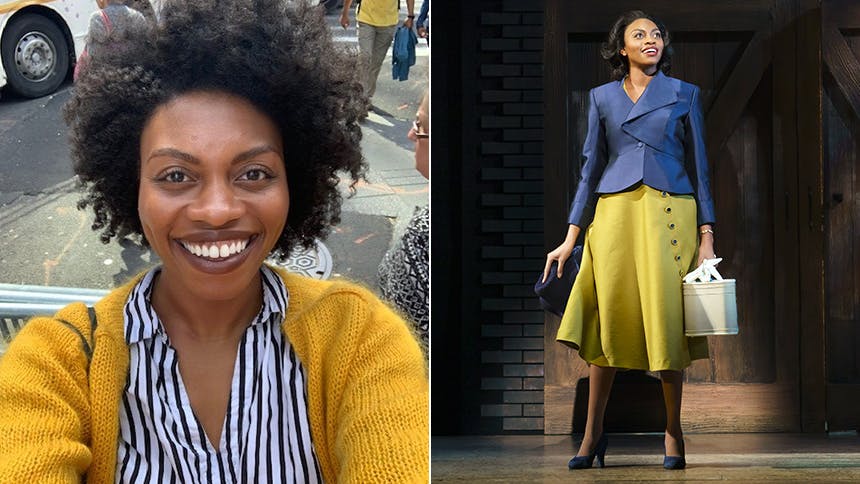 revival as Hattie (the dresser and friend to Kelli O'Hara's Lilli Vanessi), and when Adrienne steps forward to sing “Another Op'nin, Another Show", the audiences loses its mind. From then on, it's impossible not to take notice of Adrienne's Hattie, whether it's in the backstage scenes or dancing the house down in "Too Darn Hot". BroadwayBox caught up with Adrienne to talk about stripping away caricatures in Kiss Me, Kate, her Broadway debut as Nala in The Lion King, and her Aida dream.

1. What did you want to bring to Hattie in this production? What was important to you when crafting your performance?
Above all else, I wanted Hattie to be a real person. I wanted more for Hattie than just the humor that we tend to see from black characters during this time period. Don’t get me wrong, that style of humor makes me laugh too, but there are layers to people and sometimes we need to see the layers. I decided that Hattie deserved to be quick-witted, strong, sexy, and warm, too. It is important to me that when I take on a role that depicts a black woman on stage (when she isn't a lion), that she is a real person and not a caricature of a black woman. We have enough caricatures to contend with, I’d rather depict a woman who is honest and kind of reminds me of my mother.

2. What’s your favorite moment in Kiss Me, Kate? How did you first find it?
Ha! That’s easy. I get to hold Kelli O’Hara's hand and sing my face off. That is my absolute favorite moment. Kelli has such a warm and generous spirit. She is a joy to be around. So, when I walk over to her to sing the ending of “Another Op'nin, Another Show,” she takes my hand and we all line up at the lip of the stage and finish the number together, I couldn’t be happier.

3. What are three things you need for a two-show day on Broadway?
A good meal from Dig Inn. A dirty chai latte with oat milk. And some time to journal and clear my head.

4. Who were the voices you were obsessed with growing up?
Stevie Wonder. Luther Vandross. Whitney Houston. Donny Hathaway. Fred Hammond. John P. Key. Mariah Carey, I probably drove my family crazy crooning “Always Be My Baby” on repeat. I can be a bit obsessive when it comes to discovering new things that I love. I will discover some album, or some artist (typically that everyone has known for decades, but I’m just now discovering because I’m generally late to the party), and I will listen to them non-stop for a couple of months. I’ve been doing this since I could pop a tape into a player.

5. Tell us a memorable audition story.
Oh gee, do I have to? Usually if an audition was memorable for me, it was because I booked the job, or I did something embarrassing. But who wants to read about me acing an audition and booking a job? No one but my parents. So, I’ll tell you an embarrassing one and hope that you don’t judge me too hard. I had the opportunity to go in for a well-known director, who shall remain nameless for this story. I only had one line and zero context, as they were keeping the storyline under wraps. So I go in, and I say my line… and then the casting director begins to improv and I don’t know what to do! I just said something silly that I cannot remember, probably because I blocked the whole thing out, and they thanked me and I left.

6. What was your biggest onstage mishap during your run as Nala in The Lion King?
Scar does the tango with Nala to try to seduce her. The seduction doesn’t work and she swipes at him and runs away. Well, one night I swiped at Scar—played by the charming Stephen Carlile—and I knocked his head mask clean off.

7. What did your experience in The Lion King and that Broadway debut teach you about yourself?
Those experiences taught me that I’m stronger than I give myself credit for. I moved to New York, learned the Nala track, and got married all in three months. I felt pretty lonely and overwhelmed most of the time. I was losing my mind, but somehow, with my support system and sheer will, it happened. And we lived to tell the tale. I learned that when destiny comes a calling you better be ready, because she waits for no one and it is a wild, wild ride.

8. What was an early role you played that gave you the confidence to pursue this as a profession?
I started this career kind of late. But when I put my mind to something, I do it. So, once I decided that I was going to pursue this profession, I just crashed every equity call, asked actor friends for advice, did a bunch of side jobs, and just figured it out. I can’t say that a specific role gave me the courage to do so. But lately I’ve been thinking about my childhood, and I remember when I was about ten or so my sister and I had created a game that we used to play with my niece and nephew called "witch mama”. We used our bunk beds to create the set, and we created scenarios and played out scenes all while maintaining our roles. Of course, I was the "witch mama”. When I think back to those memories, I know for sure that I’m exactly where I should be.

9. What’s the dream role that you have to play someday, somewhere?
I want to do everything! That’s my problem. But, if I must choose, Aida sounds like a dream.

10. What is your current pop culture obsession?
Wait, what are the kids doing nowadays? I’m still deep diving into Queen and Journey right now, my latest discoveries.

Don’t miss Adrienne Walker as Hattie in RTC’s revival of ‘Kiss Me, Kate’, running at Studio 54 through June 30.