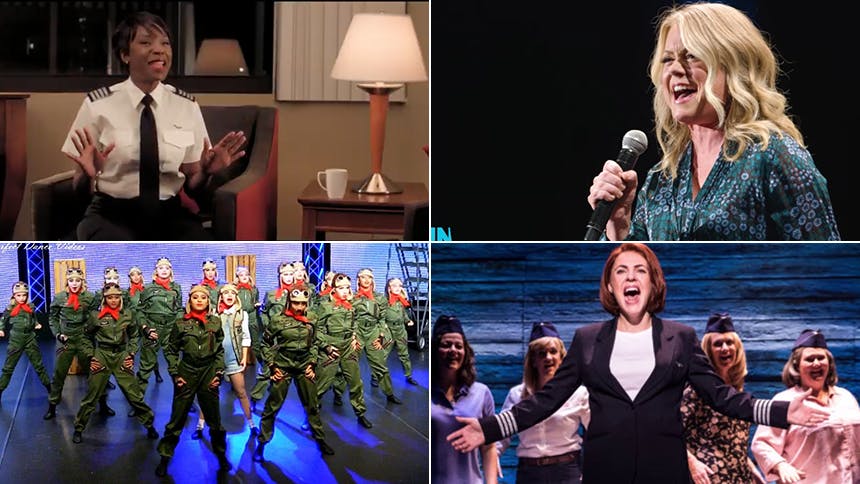 The Tony-nominated and Olivier Award-winning musical Come From Away has audiences the world over shouting, “I am an islander”, and it’s fair to say the crown jewel in the show’s Tony-nominated David Hein and Irene Sankoff score is Captain Beverley Bass’ 11 o’clock number “Me and The Sky”. As the originator of the role, Tony nominee Jenn Colella made this song soar, and she continues to reach new heights nightly at the Schoenfeld Theatre.


With this intimate musical becoming an international hit, more and more people are putting their spin on “Me and the Sky”, and we can’t get enough. Scroll on for 10 of our favorite renditions of the Come From Away showstopper.


Rachel Tucker brings all the Elphaba notes you want from her. She creates dramatic tension but still nails the humor. No wonder she got an Olivier nom for opening the show in London. She ignites the fire you felt first hearing this number.


Mariah had me smiling from the jump. The storytelling is on point, she’s serving some sass, and then there’s all that vocal flare. Those big notes are her sweet spot. (Don’t harp on lyric flubs.)


I want to see the Girl from North Country star sing the whole damn song. Not only are the vocals fire, but the line readings are completely original. She owns this while making it look so effortless.


Another former Elphaba puts her spin on “Me and the Sky” and it’s absolutely everything. I was changed for good after 1:15. That voice does not quit! I’d download a recording of this version.


Love that Come From Away OBCer Kendra Kassebaum took on this song that she didn’t perform in the show (and in front of IRL Bev Bass). She takes her time with it. She is selling every lyric, every beat. “Me and the Sky” a song for both Elphabas and Glindas.


Yas, choreo!! Seeing all these young ladies dance to this is nothing short of emotional. The video just kept getting better as it goes on, and then to use the benches as The Towers was so smart. This is truly unlike any other video on the list.


Marnie Yule’s got pipes and she is not playing around! I am going to go on a YouTube spiral of Marnie belting the greats.


The Australian Come From Away star begins at the 60 second mark. There’s a lot of joy in her performance and a lot of strength.


The star of the Come From Away tour gives it such a fun country twang. Also that “grown” at 3:30 is everything.


Julia is Colella’s standby for Beverly Bass in the Broadway production. There’s such warmth in her performance. Also, she sneaks in a “Defying Gravity” moment in the middle that weirdly works well.

Experience the thrill of "Me and the Sky" live in 'Come From Away' at Broadway's Schoenfeld Theatre.