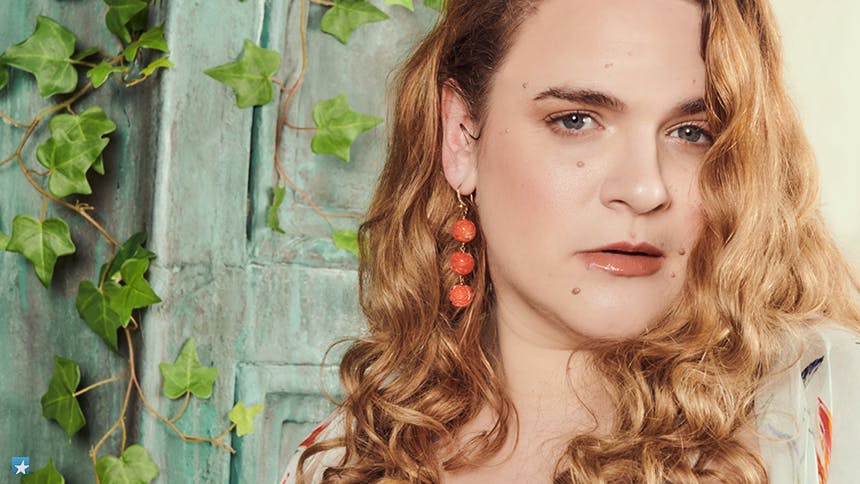 The Broadway showstopper is alive and well and living its best life this season, thanks to the 10 incredible performers featured in our upcoming spring photo & interview series. The talented group was photographed by Jenny Anderson at Times Square's Haswell Green's. Kicking off the series is Bonnie Milligan, the beltress who made a memorable, OCC & Drama League-nominated Broadway debut as Princess Pamela (a vain royal who finds unexpected love with her lady in waiting) in the short-lived Go-Go’s musical Head Over Heels. She blew the roof off the intimate Hudson Theatre belting “Beautiful”, “Automatic Rainy Day” and “How Much More”, and you could still hear the laughs from her lesbian Mad Libs poem.


1. You were the only cast member to be with Head Over Heels from its inception to the Broadway run. Tell me about your journey with it as it changed and as you changed. What was your roller coaster ride with that show and Princess Pamela like?
Roller coaster is the best word for it. Any time we're bringing on new people or starting fresh in a process—whether it was a reading, or going up to Vassar at New York Stage and Film, or doing the lab, or doing another reading, or starting out-of-town—you really want it to be fresh with this new group of people and build whatever you're building together, because my Mopsa changed every time until Broadway. So, you want to find your own dynamic, especially with your lady love. That was important to me. It was like a constant lesson in being open and learning from everyone around you.

I know this character so deeply, like the back of my hand. I always thought to make her multi-dimensional when she could be just one. That’s something I worked on from day one when we were out at the Oregon Shakespeare Festival. I was desperately trying to make everything mean something—where was she coming from and what she about. I learned a lot about believing myself and my voice and believing in my beauty, and stepping into the role of this beautiful woman downstage center, rather than the girl off to the side.


2. What did it mean for you to be that representation for people seeing the show and seeing themselves in you?
It was amazing, especially because of the people I would meet at the stage door. For me, being a big girl, being the beautiful girl was so revolutionary and amazing. This body-positive, queer icon. I knew the importance of it for people and the importance for me. Had I seen someone like this be portrayed like this, I might have held onto confidence a lot quicker, and a lot sooner. I still get messages from people of all ages saying, "You're still teaching me to love myself and find confidence. I'm a woman in her 50s and you're teaching us the positivity that you're putting out means the world." Because it's choice, I think for anybody's it's a choice, depending on what you're going through, to love yourself. Sometimes it's hard, and sometimes it's easy, and sometimes you're like "Yaaas, killing it," and other times you're like, "Ugghh!" Especially as an actor, but I think it's just important to have that representation.

3. So, as an actor, how do you overcome the doubts that you might have to create someone as confident in herself as Princess Pamela had to be nightly?
How I approached it was looking at the circumstances of this girl that her whole life has been told that her beauty is what her value is. There are days I feel beautiful, and there are days that I struggle with it, but it was a beautiful, healing experience. There were some days—after we'd gotten our closing notice—I was auditioning and it had something that was fat shaming. (You get a lot of these scripts.) I left, and I was just in tears. I thought, "I don't want to do this anymore. That's not what I'm about and I hope the world shifts." I remember getting to the theatre that night and I was pretty shook, because you've been doing [Head Over Heels] for a while and you think the world has changed. So, that night to go on stage, eneter, and sing about how gorgeous I am was like, "Yeah, that's what we're doing! That's what we're embracing!" I owe it to anybody sitting out there who has been told they're not pretty to see themselves onstage and go "You know what? I am pretty. Screw that!" It just felt so important because I knew that somebody needed to hear that in that audience. Some days, it was easy. Some days, it was really healing.


4. Do you remember the first time that you felt you were talented—like your voice was special?
When I was very little. I grew up singing in the church—my parents were singers—and I remember I was singing in front of everybody as soon as I could talk. I loved it from the start. I remember—I was about four or five—a woman coming up to me afterwards with tears in her eyes saying, "You really have something in you and you are anointed. You're something so special." I didn't understand it, but I remember.

5. You sound so incredible on the Head Over Heels album, and you sounded just as insane in real life. How do you care for your voice? How do you make sure that Bonnie Milligan sound is there every time?
Well, I did not have much of a life, especially when I was in the show. That was an insanely vocally challenging show. I did not drink; I drank a lot of water; I wouldn't go out; and then just rest. I didn't do much other than the show, and that's the sacrifice you make so that you have that show eight times a week. It's just a discipline that you have to have.


6. Whose voices were you obsessed with growing up?
Reba McEntire. Mariah Carey, Whitney Houston, and Celine Dion. When I came to musical theatre in junior high and high school, I was obsessed with Linda Eder and Christine Ebersole.

7. What was the first musical you were obsessed with?
That I knew front to back? The Last Five Years, to tell you the truth. I was like obsessed with it. I also loved Lippa's The Wild Party. right? The section of "Make Me Happy" was some of the best acting I've ever just listened to without seeing something. I was so blown away by that album. I kept going back. Brian d'Arcy James, what he does in that is obscene. You can see it and yet I had never seen it. I was just following liner notes and listening.


8. What did you do for yourself after Head Over Heels closed? It must have been hard after giving years of your life to the project, and making your Broadway debut. How did you overcome that heartbreak?
The closing weeks were the most beautiful of my life. It was this weird double-edged sword. That closing performance was so epic, with so many standing ovations. It was just so emotional. It was honestly the most beautiful night of my life. It just felt like, "No, we did something here." So, afterwards, I kind of ran right into two readings right away to keep me busy. Then, I went away for a week on a vacation with my best friend and we went down to Florida. We stayed at his friend’s place; we had a hot tub on our back porch; and we just vegged out. I tried to journal. That was this insane chapter of my life, but that's one chapter in the book. Then we turn the page and now what's next?

9. I feel like I'd known your voice and who you were for years before Head Over Heels based on the New York concert circuit. What was it like to navigate New York as someone who is talented and performing but not on Broadway yet?
I was a little lost when I first got here. I'd had some seeds of doubt planted in me right before. People saying you're not really going to make it but saying it with love, which is harder, So I wasn't going for it as hard as I thought for the first five years. Then, honestly, I got into some therapy, worked through some things, and I was like, "Oh wait, let's go back to this girl who believed in what she had to bring. It's not going to be an easy road but that's okay. I'm supposed to be doing this for a reason." Then, when you started getting the confidence back, it became doing off-off-Broadway shows, The Flea Theatre, and networking and meeting people, and doing every concert known to man for no pay and just for the hopes of a video. That's how I started meeting people and connecting. I would hear all the time, "Well, why aren't you on Broadway. Your voice ..." And I'd be like, "I don't know. I'm not a good enough dancer to be in the ensemble; and I'm trying to get into the rooms for the other parts, but they're not letting me in yet, but we'll get there." It just took a while. Then I had somebody who believed me and helped me get an agent. Then I got the Kinky Boots first national tour. Then it just slowly built up. I always felt like this is what I've been put on this earth to do so, I’ve got to do it. Which is why I'm now doing all the concerts known to man again until whatever the next step is comes along.

Newer
10 Performances of “Me and the Sky” from Come From Away That Your Day Needs
Older
Introduce Yourself(ie): 10 Questions with Kiss Me, Kate Revival Star Adrienne Walker