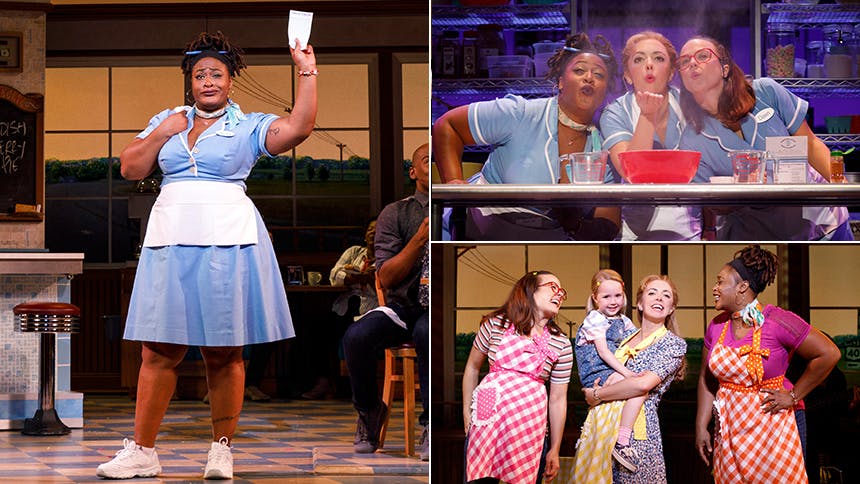 Charity Angél Dawson created the scene-stealing, LOL role of Nurse Norma when Sara Bareilles' hit musical adaptation of Waitress opened three years ago today at Broadway's Brooks Atkinson Theatre. It was her second Broadway credit after making her debut in the Side Show revival, and she's been a part of Waitress ever since. When Tony nominee Keala Settle left the show, Charity took over as Jenna's no-nonsense work wife, Becky—a role she's now played on Broadway and on the Waitress tour. BroadwayBox caught up with Charity to talk about her three years with Waitress, performing "I Didn't Plan It" to Sara Bareilles, and how her Becky changes as the Jennas change.

1. What was your goal in creating Nurse Norma for the stage three years ago? What’s your goal now in playing Becky on Broadway?
My goal in creating Norma was to make a whole person out of this. In the script, she has some lines here and there and then a lot of dot, dot, dot [ellipsis]. I wanted to fill those dots in with a whole person that the audience could go on this ride with, even if it was just a facial expression or whatever. They would be with her the whole time, and I feel like that was done.

My goals now in playing Becky are to tell the truth, to be fresh, to be present, to listen, and to be who I am supposed to be in this world and each of these peoples' lives that I encounter—in Jenna's life, in Dawn's life and even Cal's life. That's my goal; I’m doing that every day.

2. What felt different about taking Waitress on tour through America vs the Broadway run?
Taking it across America was very interesting because each of the different [political] climates and different ideals. So, different things land differently. And you see pretty quickly, like, "Okay, so y'all are more conservative," or "Well, all right. Y'all a little wilder." You definitely get a sense of the place that you're in based on how good the response is to the show. But also, it was actually very interesting to see what was just universal. I feel like what was consistent was the effect at the end. Where it got you to at the end was always the same.

3. I imagine you’be played opposite almost ever Jenna there is. How does your Becky change when the Jennas change?
I've played with every Jenna except for Katharine McPhee. It's different because each person is different and they're going to bring something different to the Jenna. I do things with Shoshana that I've never done with any other Jenna because she does things that no other Jenna has done. She's bringing her spirit and her thoughts to the role. So, I feel like it has to change if you're truly listening and truly present with the person; what you're doing has to shift based on what they're giving you. So, it definitely does.
How do you figure out the balance when a new Jenna comes in?
Time. You have maybe a couple of rehearsals with them and a put-in, but it's really on the job things that are happening. As you go through a show, you think the first week is like rehearsals, and then the second week there are previews, and the third or maybe the fourth week it opens because now you're finding your rhythm. You're creating a new rhythm with someone.

4. If you could pick just one night, what’s been your most memorable performance of Waitress this last three years?
Actually, there was one day where I had just taken over for Becky that I feel like I fell into the groove. I was able to move back into it in a way. I leaned back in comfortability and in confidence and found the energy of it. I felt like, "Aha! I got it. I understand it. I see who she is. I get her goals. I get the fear of her." But it took a while. That day it just felt so good to do it. Because I really felt like I had question marks for so long.

5. You have this amazing, showstopping number with “I Didn’t Plan it”. How did you find that moment?
I feel like I'm still working. The song is a monster. To me, it's still challenging. You still have to strap yourself in and go for the ride on these songs because it accesses a large part of my range.
What was it like singing that song at Sara Bareilles when she was playing Jenna opposite you?
It was so crazy because I've been a huge fan of hers for a very long time. So that was pretty surreal. The first time I ever did it with her, I was just like, "Whoa, I'm singing your music to you." She did such an amazing job of taking hats off and putting another hat on and making that clear to us. It was hard, but I didn't feel this really heavy pressure of "she wrote it, she wrote it, she wrote it."

Waitress
Best Priced Tickets
Newer
Britton Smith Takes Fans Through All His Be More Chill Characters & Costumes, From Jake to Rashidra to Prince
Older
Check Out Five Scenes of Annette Bening, Tracy Letts, and Benjamin Walker in Broadway’s All My Sons
Sign up for BroadwayBox Discount Alerts