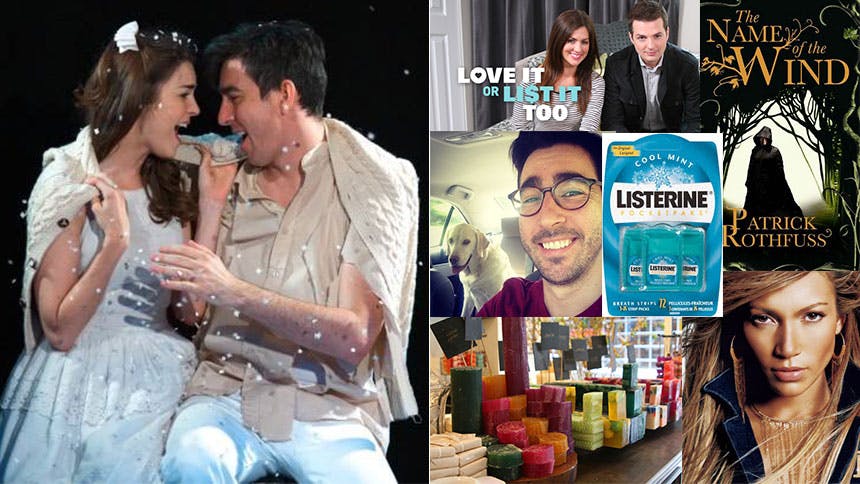 Max Crumm became a Broadway name in 2007 when “Slacker Danny” won the reality competition You’re the One That I Want and nabbed the role of Danny Zuko in Tony-nominated revival of Grease. Since that time, Crumm starred in off-Broadway’s Disaster! and F#%king Up Everything, the film Easy A and the popular webseries Wallflowers. Now, Crumm headlines the iconic musical The Fantasticks at the Snapple Theatre, and BroadwayBox caught up with adorable actor to get a snapshot of his life today.

1. The best thing about my current role in The Fantasticks:
I love playing whimsical characters! If you know me, you know that I love anything magical or whimsical and Matt is just that. I totally identify with his poetic adventurous side. He's a lover not a fighter. Plus, being a part of this legendary production is surreal. There is a feeling around the entire production that creates a free space to play as an actor; but the BEST thing would be that Matt is goofy and whimsical…or how I play him anyway. :)

2. Before I step on stage, I typically:
Take a sip of tea, pop some Listerine strips into my mouth and jump around! The tea soothes my throat, the strips coat it (so I can sing) and the jumping helps get out any left over jitters lurking beneath the surface. I’m usually jumping around backstage.

3. After a performance of The Fantasticks, I like to:
Race home and spend time with my pup and my snacks!!


This is a picture of Samantha Bruce (who plays Luisa) and Anna Gilligan from Fox News. We did a segment for the show this morning! They are pretending to have a conversation while looking at the Playbill. SUPER fancy stuff.

5. The best way to spend a day off:
RELAAAXXXING.. Eating snacks... taking Birdie (my Labrador) to the dog park..and watching as MUCH HGTV as possible.

6. My current NYC obsession:
I'm not sure if this is an NYC obsession or not, but I'm SUPER into soaps. Like, bath or hand soap..,I can spend hours smelling things. So buying soap is the perfect thing for my OCD. NYC has SO many options for soap buying and that pleases me. I'm crazy.

7. The background to my cell phone right now is:
HAHA for some reason I'm really into using the stock pictures that come with the phone! So my background is just plain black…

8. The album I can’t stop listening to:
I don't know about album, but I can't stop listening to "First Love" by J.Lo because I will always love horrible pop music.I thought about putting something cool.. like "Girls" by 1975 or some indie band…but I thought I'd just be honest.

9. The book I really want to find the time to read:
WELL… I started reading this book series last year called The Name of the Wind by Patrick Rothfuss and it is INCREDIBLE. It’s about wizards and journeys and things like that. I’m half way through the second book but haven't picked it up in a while.. so I should probably find time to get back into it. Also, my first book is STILL at Elizabeth Judd's house and I need it back, Elizabeth...

10. The last TV show I’ve watched at least three episodes in a row of:
Love It or List It, Too on HGTV. I can't get ENOUGH of Canada homes or renovations. We all live in shoe boxes compared to these people living in mansions in Canada.. It’s insane.

11. The last time I laughed until I nearly cried:
I don't laugh and I CERTAINLY don't cry.

12. The highlight of my day now typically includes:
Getting to perform on a New York stage!! There is nothing better than doing what you love! I am forever stumped that I get do this on such a scale. 12-year-old me is beaming!!

See Max Crumm be all whimsical and goofy in New York’s long-running institution ‘The Fantasticks’ at the Snapple Theatre.