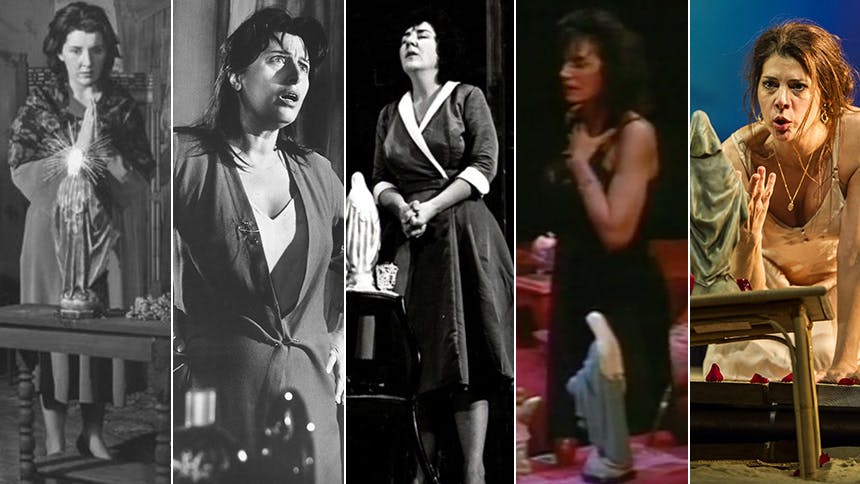 Performances begin tonight, September 19, for the fourth Broadway production of Tennessee Williams’ The Rose Tattoo. Oscar winner Marissa Tomei stars as Serafina Delle Rose, an emotionally distraught Italian widow living in Mississippi who must confront that the time has come to move on. The Roundabout Theatre Company production co-stars Emun Elliott as her love interest, Alvaro Mangiacavallo, and Ella Rubin as her daughter, Rosa—both of whom make their Broadway debuts with the production.


Scroll on as BroadwayBox takes a look back at the three previous Broadway productions of The Rose Tattoo and the Oscar-nominated film adaptation.


The play first premiered at Broadway’s Martin Beck Theatre (Aka the Hirschfeld) on February 3, 1951. Maureen Stapleton starred as Serafina Delle Rose and Eli Wallach co-starred as Alvaro Mangiacavallo. Both Stapleton and Wallach won 1951 Tony and Theatre World Awards for their performances. The Rose Tattoo also won the Tony Award for Best Play, as well as one for scenic design. It played 306 performances.


In 1955, The Rose Tattoo received a film adaptation. Italian actress Anna Magnani starred as Serafina Delle Rose opposite Burt Lancaster. Tennessee Williams originally wrote the role for Magnani but her English was too limited to do the Broadway run. However, when the film was being adapted Williams insisted that Magnani be cast. The Rose Tattoo was her first major English speaking role in Hollywood and she won an Oscar Golden Globe, and BAFTA for her performance.


The Rose Tattoo and its original Tony-winning star Maureen Stapleton returned to Broadway on November 6, 1966. The first Broadway revival played 66 performances at the Billy Rose Theatre (now Nederlander). Christopher Walken won a 1967 Theatre World Award for his performance as Jack Hunter and Maria Tucci was nominated for a Tony Award for her performance as Rose Delle Rose.

It took nearly 30 years for The Rose Tattoo to return to Broadway. Oscar & Tony winner Mercedes Ruehl and Tony Award winner Anthony LaPaglia starred in the 1995 revival at Circle in the Square Theatre. LaPaglia won a 1995 Theatre World Award for his performance as Alvaro and the show as nominated for a Tony Award for Best Revival of a Play. It ran 73 performances. You can see Ruehl and LaPaglia in a scene beginning above at 11:19.