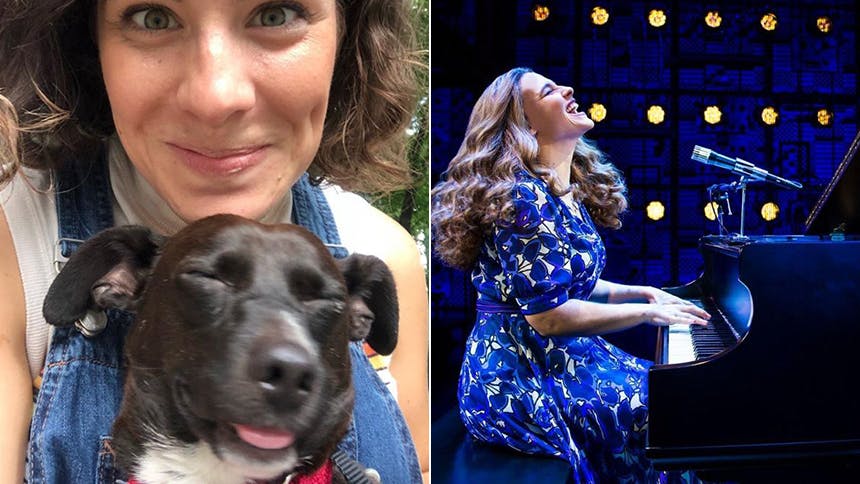 to close out the run as Broadway's final Carole King. The Chicago actress first played Carole on the show's first national tour before making her Broadway debut as the Grammy-winning icon. On October 27, she'll feel the earth move one last time at Broadway's Sondheim Theatre.


BroadwayBox caught up with Sarah to discuss growing into the role of Carole King through the years, her nerve-racking audition, and her dream Broadway diva dinner party.

1. What was your reaction when you got the call to be Broadway’s final Carole King?
I was stunned! I was still living in Chicago, with plans to move to NYC later this fall, but obviously when I got the call I changed my plans! It is such a gift to move to NYC with a job—I never thought I would get to be here under these circumstances!

2. What does this show and this role mean to you?
Sometimes I feel if I think too hard about playing Carole King, I’ll crumble under the pressure of portraying such a beloved icon. What grounds me is remembering that Carole has all the same struggles as anyone else: heartache, insecurity, fear of the future, etc. Most importantly, I feel strongly that I have an obligation to play her as truthfully and honestly as possible so that the audience can deepen their connection with her. This show isn’t just about her music, it’s about her personal journey and the songs that were written along the way.  It also means so much that I get to play a woman whose story has nothing to do with her looks. As a woman, it seems rare to play a leading lady whose story doesn’t center around how she feels or how others feel about her body or how she uses her body. Sure, Carole has body image issues, like anyone else, but the story centers around her journey finding confidence in her own abilities and discovering that she is enough on her own. It’s a joy to go on that journey every night.

3. How has your Carole changed since you first joined the tour to now?
I feel my Carole has grown just as much as I have in the last four years spent exploring her character. Just as Carole experiences heartache, I have experienced similar heartbreaks and it has allowed me to understand her more fully. For example, when I first started with the show, performing “Natural Woman” was hard for me in the context of the show. She is performing the song for the first time in years; it was written when she was in love, but has since ended that relationship. Having to experience layers of emotion—painful and joyful memories at the same time—was tough, but as I’ve had time to draw on my own experiences and heartbreaks I see how the song has all those emotions at the same time and I’ve come to love performing it.

4. While traveling the country with Beautiful, what were three things that were always in your suitcase?
Dog food. Freeze dried dog food. It’s really light and easy to pack. My dog, Warren, traveled with me the last year of the tour. I traveled with a blanket from home for a while, just to lay on my bed to make my room for the week feel more homey. I always, always have a book and a water bottle everywhere I go. Gotta be hydrated and gotta have something to keep my eyes from looking at Instagram.

5. You did some major Carole King research on YouTube. What’s your favorite performance video of hers and why?
This isn’t a performance of hers, but watching Carole watch Aretha Franklin at her Kennedy Center honors is my favorite video. It speaks to how supportive she is of other artists, how much she LOVES watching others work, and what a bright infectious energy she has.

6. What was meeting the real Carole like for you?
Wish I could tell you, but I blacked out and couldn’t stop crying. She was gracious and politely ignored my blubbering nonsense. I also remember she held my hand when we took a group picture and I haven’t washed my hand since.

7. What was the first musical you were obsessed with and what spoke to you about it?
I went through a strong Rent phase in high school scream singing along to “La Vie Bohème” in my room after school. Even though I absolutely did NOT understand the plight of the characters, the fact that they were angsty outsiders spoke to my angsty teenage heart.

8. Tell us a memorable audition story.
When I first auditioned for Beautiful, I was so nervous—I couldn’t stop shaking before I went in the room. I put a ton of pressure on myself to do well because I had to fly in from Chicago and it was such an expensive trip. When I walked in the room, the first thing I saw was a friend from Chicago who was my reader that afternoon! It took all the pressure off and, since she is such a giving actor, made my audition so much better. Pretty sure she was the only reason I got a callback.

9. What’s your pre-show for Beautiful like? Do you listen to anything in particular? Do you have any rituals?
My pre-show is usually RUSHED. I don’t like to have a ton of extra time, it makes me nervous. I’m usually on time, but rarely early so I usually just throw my clothes on and get to doing my makeup. I listen to news podcasts...reminds me there’s a lot more going on in the world besides our silly show.

10. If you could have a dinner party with any three theatre legends, who would you invite and why?
Patti LuPone, Donna Murphy, and Lena Hall. I’d want Patti to tell me stories of how she overcame setbacks; Donna to talk about her acting process; and Lena to tell me the secrets to rock singing.