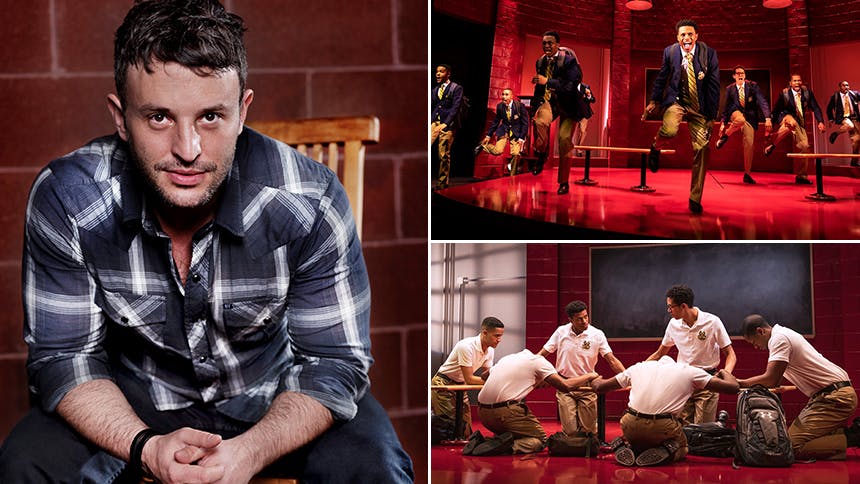 
This is the fourth Broadway play Trip has directed in the last two years (the others being Lobby Hero, Six Degrees of Separation and Significant Other). His award-winning off-Broadway works includes Bachelorette, Punk Rock, Dog Sees God, Assistance, A Small Fire and Atlantic Theater Company's new play The Mother.


BroadwayBox caught up with Trip to discuss discovering new talent, his time working with the prolific Mike Nichols, and the biggest challenge theatre directors face today.

1. What did you look for when you were casting this show, and more specifically how did you know that Jeremy Pope was the actor you needed to play Pharus?
It was deeply challenging. It’s like you need to find a unicorn in order to play that role. It's incredibly ornate language. They have to dance beautifully, they have to sing like a dream, and they have to act their faces off. Also, they need the ability to both convey unbelievable self-possession and confidence as well as deep vulnerability at the same time. That feels contradictory but that's where the character lives.

We just found lightning in a bottle and lucked out unbelievably when we saw Jeremy. He originated the role five years ago. It was a moment of true kismet that this extraordinary human being walked into the audition room. Tyrell and I just turned to each other and our jaws were on the floor.


2. As a fan of Tarell Alvin McCraney’s since Wig Out, what was it like to finally collaborate on Choir Boy for years and through multiple productions?
As a director, I spend my whole career hoping and praying for a collaborator and a writer who is open and wise and brilliant and kind and who sees the world in a way that's not totally exactly the same way I see the world, but I learn from him or her and she or he learns from me. When Tyrell and I started working together, I was like, "Put a fork in me, I'm done!" Every day, it was the most beautiful experience. I think a large part of that is just due to the beautiful writing of Tyrell's play but also Tyrell himself. He's just the kind of person who shines so bright and you just want to bask in the work and just glow a little bit. He's the most generous, wisest, kindest, soft-spoken, humble, and also truly brilliant person. I know it's such a cliché to say this, but it just felt like it was a privilege and an honor to be chosen by him to bring this work to the stage. Honestly, I talk hyperbolically all the time but I'm actually not being hyperbolical about Tyrell.


3. What’s the biggest challenge in being a theatre director today?
Well, my mind first goes to say that I think unlike in Europe, the art of directing is unbelievably underappreciated in the States and misunderstood. I truly don't think people understand or know what it is we do as directors, and I don't think they value what we do as much as I wish our craft was valued.

If the play is a great play, then they praise the writing. If actors are amazing, people praise the acting. As if all that happens in a vacuum without the input and imprimatur of what a director can put into a process. Our hands are in every pot, but our hands are also invisible in some ways. It's very hard to evaluate or determine what it is a director's contribution is.

That’s also what I love about being a director in theatre, which is a purely collaborative art form. I think directing is the most collaborative of all the disciplines within theatre because we are collaborating with the designers and the writers and the actors and the producers and the stage manager. We have to be fluent in the languages of every other person within the theatre, and I love that. I love the ability to as a director, get everyone's impulses and synthesize them and create something collaboratively together. But those choices and those impulses are filtered through the director's lens. The director is able to make something coherent out of a jumble of voices and ideas and opinions.


4. Having grown up in New York, what was an early play or musical you saw that really rocked your world and influenced your point of view?
I was lucky. I'm a native New Yorker and grew up on the Upper East Side. My parents took me to the theatre the way some people's parents take their kids to church or to Disney World. We went to the theatre religiously as family. For me, the most transformative experiences were right around the time I hit adolescence, and I was trying to figure out who I was and my sexuality. That was back in the early ‘90s and there wasn't a plethora of depictions of gay identities on television and in film the way there is now. So, for me, deeply transformative was seeing the original Broadway production of Angels in America or the original Broadway productions of Falsettos or Sixty Degrees of Separation or Love! Valour! Compassion! I mean these are shows in which my virgining experience and virgining awareness of my gay identity was reflected back to me in a way I had no other access to.It was a way for me of seeing a possibility of being that gave me hope that I could survive this experience of being other and find a family and find a place that was going to accept me for who I was. I think that's why I became a theatre director to be honest with you and why I made a life at the theater. The theater was the first place that was able to welcome me and to say your weirdness and your otherness and your oddities are okay—and actually, the theater is completely comprised of people like you, so come on in, the water's warm.


5. You worked with Mike Nichols on HBO’s epic Angels in America and The Sea Gull at Shakespeare in the Park. What’s the biggest thing you took away from that experience with him?
I learned so much from him. At the end of the day, he was most brilliant conversationalist I've ever encountered in my entire life. He was just able to talk extemporaneously on any subject and charm you and make you laugh and wink at you and I think as a young director that was such a formative experience. For instance, on The Seagull, we spent almost two weeks at rehearsal just sitting around the table chit chatting. As a young director, my impulse was like, "Oh my god, we’ve got to get up! We’ve got to stage this; we’ve got to rehearse it; we’ve got to make sure the actors are memorized.” You want to start controlling the experience immediately. But the first two weeks were just him chit chatting around the table and talking about anything other than the play with these actors. Then it dawned on me: he's creating intimacy and trust and ease and a family, which is all things that you need in order to go deep and go into a rehearsal process and do the exploration to have an end product that is going to reflect the intensity and depth of the work that you're tackling. It was just an absolutely eye-opening experience. I loved learning that from him—that you sort of work without realizing you're working—that was a massive lesson for me.

6. What’s something we’d be surprised to learn about the upcoming Magic Mike the Musical you are directing?
I am truly excited about it. The most surprising thing (and the best choice that we made starting the process of Magic Mike the Musical) was that we decided we're not doing the movie. We're not going to put that movie on stage. Why mess with something that was so successful in and of itself? Our take on it was to kind of make a prequel—to do the origin story. How did Magic Mike become Magic Mike? I think the audiences will encounter all of their beloved characters from that film but within the context of an original story. I think it’s really exciting.


7. You’ve directed huge stars and shepherded unknown actors to the stage. What do you love about discovering new talent?
My absolute favorite thing to do as a director is to introduce to the world to someone who they've never seen before and never knew that they could have the power they have. I'm thinking about Jeremy Pope as an example and thinking about when I did a play called Punk Rock and I introduced Will Pullen to New York. There's a million examples of that. Or even taking someone like Celia Keenan-Bolger, who is such a genius actress but who had never done a play before doing Bachelorette and just saying to the world, "Hey, take a look at this actor who you just thought was a wonderful musical theater comedian but look at what she can do in another genre". I did that with Lindsay Mendez too—she had never done a play before Significant Other. To me, the real joy is to be able to cast actors who I think are wildly talented in roles that conventionally they would never be thought of for.