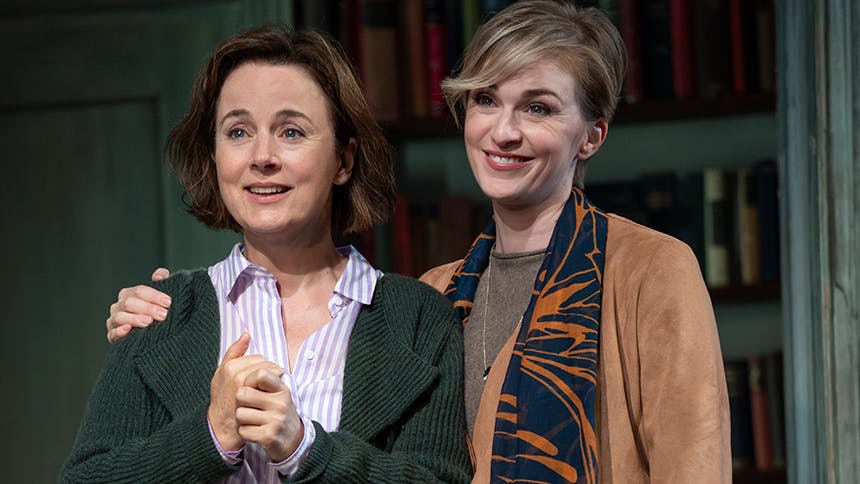 After making a memorable debut as Sibella in the Tony Award-winning Best Musical A Gentleman's Guide to Love and Murder, British actress Lisa O'Hare is back on Broadway co-starring as Eileen Atkins and Jonathan Pryce's daughter, Élise, in Florian Zeller’s new family drama The Height of the Storm

. A hit in London before transferring to Broadway, the 80-minute play examines the final years in a marriage that lasted half a century, and what happens when one partner survives the other. BroadwayBox caught up with Lisa to discuss the show's themes of love and grief, the impact of Gentleman's Guide on her, and keeping the secrets of New Amsterdam.

1. What attracted you to this piece initially? What stuck out most when you first read it?
The thing I found interesting about the piece was the family dynamic. The relationship Élise has with her sister is complicated and I wanted to explore that, but also to explore grief and how it takes on many forms. Grief doesn’t exist without love and the play is essentially about love.

2. How does your performance modify in the scenes with Eileen verses the scenes with Jonathan? How do you put together the pieces in the puzzle of this play?
Honestly, every member of this company is extraordinary in their own right. Jonathan has this incredible vulnerability to his performance and it’s always changing and evolving, which is exciting.  Eileen is such a magnetic presence and everything she does is magic. It’s pretty much a master class in acting.

As far as the puzzle of the piece goes. We have to think about it in a very simple and chronological way in order to make sense of it for our characters. It’s up to the audience to piece it together in whatever way they choose.

3. This is your second Broadway show, and your first play on Broadway. How does this time feel different for you?
It does feel different in many ways. I’m so used to having huge amounts of music to think about, and it’s a refreshing change to just tell a story. I also think—although Broadway is definitely a magical place to work—for me, it’s honestly just about the integrity of the work and making sure that regardless of what theatre I am in that I feel proud of the work I am doing.

4. What is the most sentimental thing you kept for yourself from A Gentleman’s Guide to Love and Murder to remember that experience?
Honestly, just the memories. I didn’t take anything really but that show left such a mark in me. I will always remember it fondly.

5. You play Georgia on the hit medical drama New Amsterdam. When you meet fans of the TV series, what is the one thing they want to talk about most with you?
Honestly, they often want to know where the shows storyline is going and what my character’s fate is, but, obviously, we are sworn to secrecy and I am not allowed to say. On top of that, we only see the scripts right before we film anyway.  But it’s always lovely to meet fans of that show because they are so invested in it.

Don’t miss Lisa O’Hare back on Broadway in ‘The Height of the Storm’, running at Broadway’s Friedman Theatre through November 24.