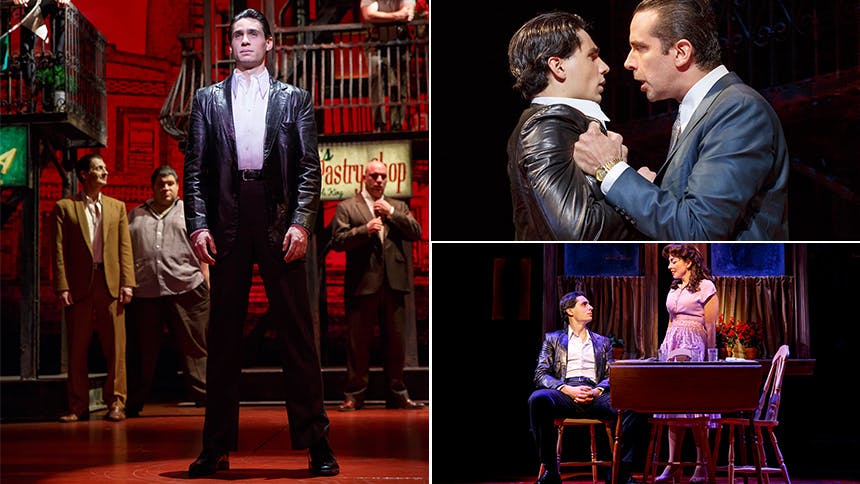 Bobby Conte Thornton makes the kind of incredible Broadway debut most young actors only dream about, leading a new musical created by powerhouses Alan Menken, Glenn Slater, Robert De Niro, Jerry Zaks, and Chazz Palminteri. Thornton stars as Calogero, a young Italian kid from the neighborhood who finds himself at a crossroads in life, in the acclaimed musical adaptation of A Bronx Tale

. BroadwayBox caught up with the star on the rise to talk about the opportunity, what he was like at 17 years old, and his bringing his grandfather into A Bronx Tale.

1. This whole life-changing A Bronx Tale experience must be one giant pinch-me moment for you. What’s been the biggest pinch-me moment in your life before this?
I’m a crazy big Frasier fan. I was doing My Fair Lady at Baystreet in the Hamptons, and David Hyde Pierce came to the show (because I think he spends his summers in the Hamptons) and he made his way backstage and I got to meet him afterwards. It was nice because he’s about to do Hello, Dolly! also directed by Jerry Zaks, so I had an in to say I’m working with the same director. I got to have a real moment with him as opposed to just being a fan—but still I was fanning out like crazy. That’s what’s crazy to think about in this whole process. I am just a musical theatre nerd. I was that nerd in high school. I now get to meet heroes of mine but as colleagues, not just as fans—even though I will always be fans of their work. That’s honestly a big pinch-me moment that doesn’t go away. I have it every day.

2. You’ve played some awesome roles regionally. Which do you wish NYC could see you in?
I almost wish this transferred simply for Chris Fitzgerald, the all-male production of A Funny Thing Happened on the Way to the Forum that we did at Two River in New Jersey. It was all of my musical comedy heroes just having an absolute blast. It was the first time I had ever done Sondheim. David Turner as Philia  gave one of the most phenomenal performances I’ve ever seen onstage. It was a very unique way to delve into this story. So I'll say Forum, not only because it would be so much fun for me to sing “Love, I Hear” on Broadway, but for Broadway to see Chris Fitzgerald do Pseudolus would be a great thrill. I think there’s a real place for it if they want to do it.

3. I must say I was surprised to find out you grew up in Cali considering how legit the Bronx Tale accent was. Whose New York accent are you serving us in A Bronx Tale?
My mom’s parents are from Manhasset, Long Island, and I am very much impersonating my Brooklyn grandfather in this production. The liveliest guy who, if you get him going, could tell story after story after story. He has the biggest heart you could ever ask for and all the Italian bravado you could ask for. Talk about someone who grew up in the slums of Brooklyn and worked three jobs to put himself through college, and now he’s created a life where he put his children and grandchildren through college. Then I look at Chaz, who grew up in a lower-middle-class household in the Bronx and through the strength of his writing wrote himself out of his situation and into this life and legacy and career that he earned fully on his own. That’s the parallel I draw between Chaz and this man I’ve spent my entire life idolizing, my grandfather. It’s a great full circle moment to go through that.

4. What do you look for from “one of your great ones”?
For me, if you are a naturally cynical person, we are not going to get along. I think you can always have a sense of realism while still making gratitude the priority in your life. What I try to work for in this time of my life that is so extraordinary (I’m well aware that I’m a lucky guy) is to remember that while I’m in a dream-like state all the time (working with my heroes and living my dream every day) that my feet remain on the ground. So in a great one, I’d look for someone who is in the same place and grateful for all the wonderful things in their life and not blinded by all the crap you deal with in everyday life.

5, We meet Calogero at age 17. When you were 17 what was your favorite
Movie? Saving Private Ryan.
Album? The Who’s Tommy, the band not the musical album.
Musical? Company.
TV show? The Office.
Article of Clothing? Oh god, definitely some ratty, ripped jeans with holes in the kneecaps.