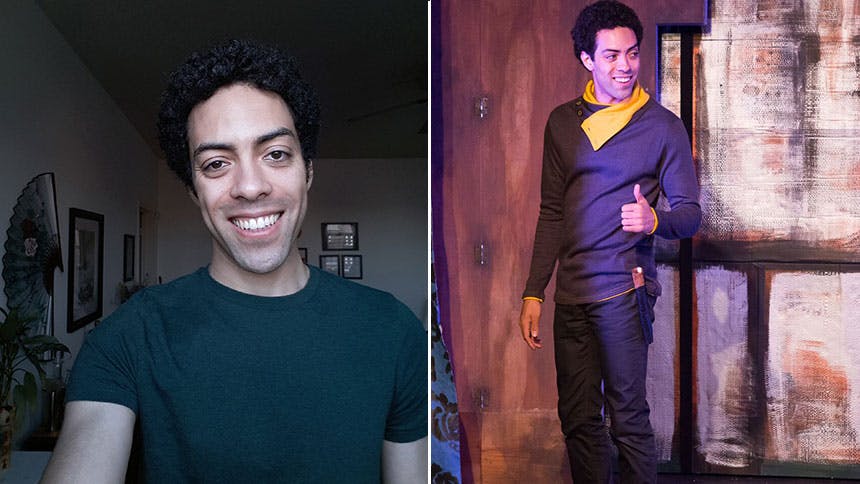 Every Harry Potter fan needs to indulge in a night at Puffs, or: Seven Increasingly Eventful Years at a Certain School of Magic and Magic, a play that reimagines all of J. K. Rowling's books from the perspective of three unlikely friends in the Hufflepuff house. James Fouhey stars as two of the series' most memorable characters, all-star Puff Cedric Diggory (star of the fourth book, The Goblet of Fire) and the evil Lord Voldemort.


Get to know the young actor (and producer of the podcast Dragons, Sexy Robots, & Adventures: a nerd manual) a bit better as he talks to BroadwayBox about all things Puffs, Potter, and more.

1. House I’d be sorted into:
When I was a kid I would've made a case for Brave, or Smart, or even Snake. But now I know the truth. I'm a Puff that dreams of greatness.

2. The most memorable performance of Puffs so far had to have been:
When about a month ago one of our actors, Eleanor Phillips, twisted her ankle about halfway through a performance (she's fine now!). At the time she couldn't walk back on stage for her next entrance because she couldn't walk at all. Our swing, Anna Dart, was sitting in the audience watching the show with some friends when they told her that she would have to go on...right now. Anna jumped in and the show never stopped. I realize that it's her job to be able to do that, but the switch from audience member to surprise performer is harder than anything I've had to do, and she handled it with talent and grace.

3. My favorite moment in The Goblet of Fire:
When Voldemort comes out of the cauldron in the graveyard. I've watched that scene on repeat over and over again and never stopped enjoying it. In a way, it's like watching the character crawl out of my childhood imagination. That is a wondrous feeling even in such a dark scene.

4. Three things I always do before recording an audio book:
With audiobooks, you're alone in a sound booth, addressing an audience that you'll never see. I like to imagine the kind of person who would love the book I'm narrating and then make sure to read to them. It's motivation.

I try to make sure that I can identify with the least likable characters. In theatre, you usually just have one or two roles to grow into, but in audio books you have to play everyone. It's easier to perform an argument between multiple characters when you sympathize with them all.

And I drink lots of water!

5. The nerdiest thing about me:
I've watched other people play Dungeons & Dragons for hours. And I've enjoyed it.

6. Fictional character I really relate to:
The Sarlacc Pit in Return of the Jedi, because I imagine it spends most of its time thinking about its next meal.

7. Play, movie, or TV show that really inspired me as a young performer:
The Godfather. It was the first time I really appreciated the effect of having great actors in a film. Before that, I hadn't thought acting could be as impressive as writing or directing.

8. Harry Potter spell I most wish I could use in my daily life:
Apparating and Disapperating. Wizard teens learn to teleport when the rest of us are learning to drive metal boxes. Forget NYC traffic and subway shutdowns. I could will myself to the theatre every night. And whenever I embarrassed myself, I could just vanish on the spot.

9. Movie I love so much I know every single word:
The Empire Strikes Back is my favorite movie. But the only character I'm mouthing the lines of is Vader.

10. Throwing a dinner party and I had to pick one guest from each series, Harry Potter, Game of Thrones, Westworld, & Star Wars:
Albus Dumbledore, Tywin Lannister, Robert Ford, and Yoda.

A few of our topics for the evening:

Don't miss James Fouhey as Cedric and Voldemort in 'Puffs, or: Seven Increasingly Eventful Years at a Certain School of Magic and Magic' at off-Broadway's Elektra Theatre.