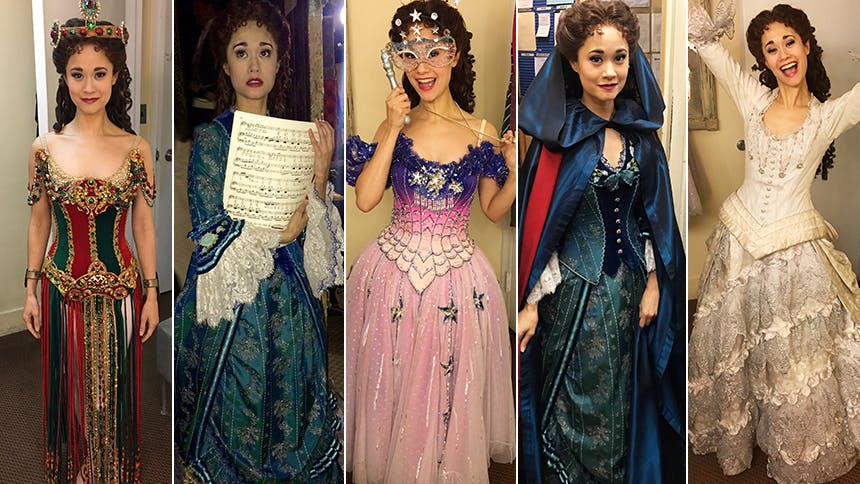 Ali Ewoldt made her Broadway debut as Cosette in the first Broadway revival of Les Miserables and now she's back leading another epic stage saga, The Phantom of the Opera

. As you may know, Ewoldt made history as the first Asian-American actress to star as fierce, young opera diva Christine Daae in the long-running Andrew Lloyd Webber musical. Below, she brings BroadwayBox behind the scenes at the Majestic Theatre for an in-depth look at each of her fabulous and iconic Maria Bjornson costumes.

The late Maria Björnson won Tony Awards for both the scenic AND costume design of The Phantom of the Opera and it’s not hard to see why. I absolutely love wearing her intricately, beautifully detailed creations. Fun fact: every costume I wear in the show has a component (cape, scarf, necklace, etc.) that comes on or off (often onstage).

Christine begins the show as a ballerina in the chorus (pointe shoes and all!) and transforms onstage (shoutout to amazing cast member Satomi Hofmann, who plays the Wardrobe Mistress) to an opera diva, and then to what I think is her most iconic look (ignore the crown in this picture). When I see myself in the onstage mirrors in the negligee, I think, “Oh wow, that’s Christine!” 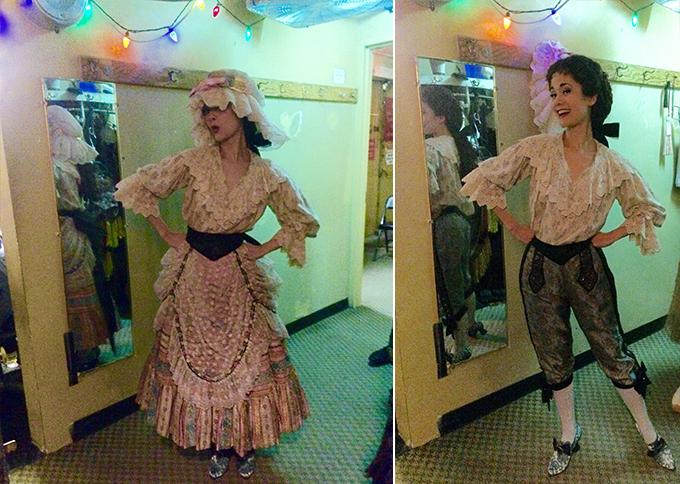 “The Pageboy” (initially incognito as “The Maid”) is definitely my most comfortable costume (pants!). I love these looks because they evoke comedic Mozart operas, which is actually how I got my start—I was contacted by a NY agent after my (small) role of Barbarina in The Marriage of Figaro at Yale Opera my senior year of college.

Yet another fabulous costume transformation! The Rooftop cape is beautiful and romantic (picture taken under stage as I’m about to run up the stairs—notice wonderful dresser Emily Fox behind me) and The Countess has pink hair (my only wig change in the show—Leonators will notice the arm of Christine-wig-man-extraordinaire Leone Gagliardi in this pic)! 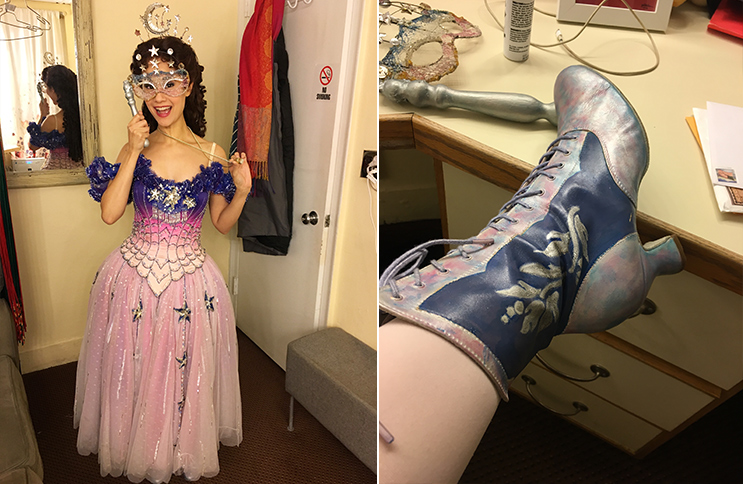 My “Star Princess” dress is the most girly outfit I wear in the show. I adore the color palette and the custom painted boots are pretty fabulous too. Sidebar: These costumes are remarkably heavy and this one is no exception. I definitely get a good workout running and dancing around the stage in her! Also, this is one of two costumes I actually get to put on in my dressing room (hence the good lighting)—all of the others are quick changes.

THE BLUE DRESS AND THE “WISHING” CAPE

I think of the stunning Blue Dress as the one nice dress Christine, an orphan, owns. With the exception of her “Masquerade” outfit (which I’d guess Raoul/The Managers purchased for her), this is the only time we see her in her own clothing. Interestingly, it is the most modest neckline I wear in the show (which I skillfully covered up in the first picture with my sheet music—oops!). Because of the bustle and train, I can’t walk backwards in this one. Plus, the weight and structure of the dress make it difficult to sing in. But all of these challenges also reflect what Christine is going through: at this moment she is trapped in many ways by being a woman of her time; the men in her life are making all of the decisions for her. The addition of the cape and the “Little Lotte” red scarf really help me get into the yearning, mourning, emotional place of “Wishing You Were Somehow Here Again.”

Christine plays “Aminta” in The Phantom’s opera, Don Juan Triumphant, and this is definitely her sexiest look. Aminta is sassy and sensual and strong-willed–all gorgeously reflected in this dress. Though Christine doesn’t get to show these sides of her own personality elsewhere in the show, I like to think they are a part of her and she loves getting to explore them through the opera. (And/or perhaps that is how I feel about playing Christine…my not-so-sassy/sensual faces in these pictures indicate that I wasn’t in character yet…). I only wear the shawl for a moment when I enter, but I think it is absolutely beautiful! 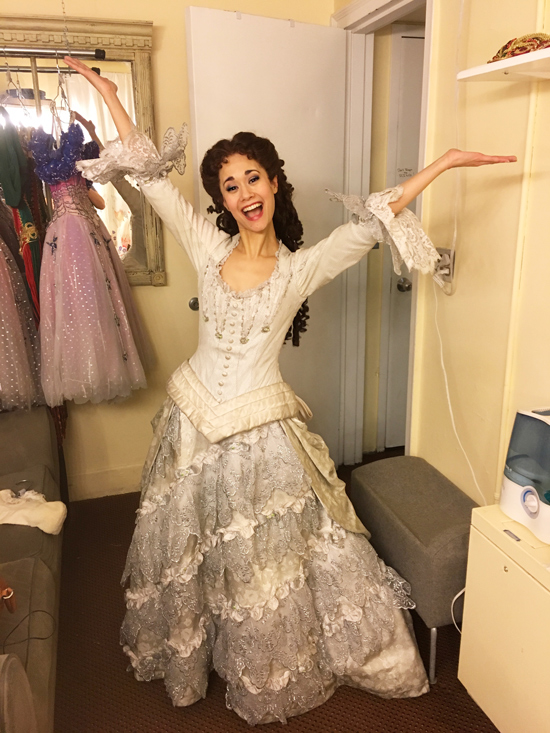 Spoiler Alert: Though this musical doesn’t end in a joyful wedding celebration, at least I still get to wear the dress! This is the dress The Phantom has made for Christine (the Mirror Bride wears it first during “Music of the Night”) and I must say, he has done a gorgeous job! Despite the fact that it is super super heavy and actually impossible to back up in gracefully (anyone who’s seen a Christine during curtain call has witnessed the elaborate kicking of the train that is required), this is my favorite dress that I wear in the show. I love the lines and the sleeves and the incredible detail work! I also love it when my wonderful leading man, James Barbour, helps me out by carrying my train up the stairs to my dressing room after the show.

Thank you for reading!! The End :)