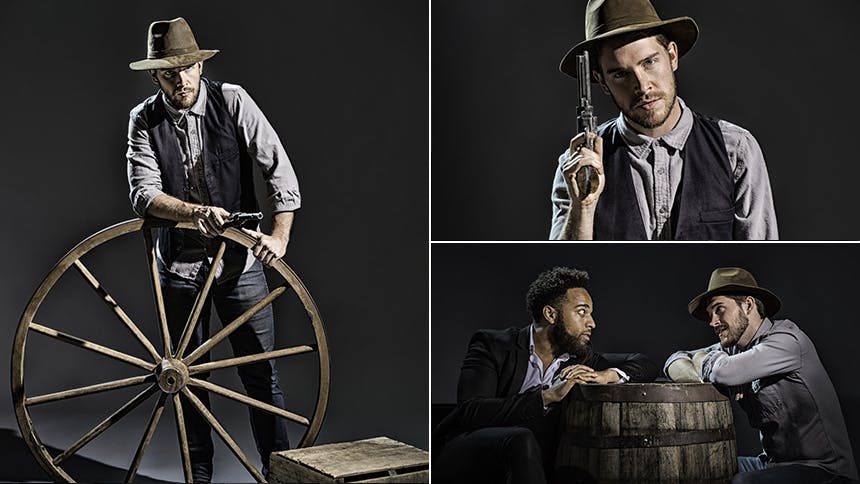 . Produced by Bruce Willis and written by Charles Cissel, Must follows a reflective Billy the Kid alone in the New Mexican desert on the eve of his murder as he conjures memories and visions of the people and relationships that most shaped his short life.


BroadwayBox caught up with the Dooling (who starred as Carrie Bradshaw's high school bestie Walt in TV's The Carrie Diaries and voiced the character Skylar in the animated series Chuggington) to talk about playing the historic figure, killer Bruce Willis films, and where Walt would be today.

1. What piece of research most informed your performance of Billy the Kid?
Honestly, the history of Billy is actually inconsequential in the narrative that Charles Cissel has cooked up. Charles has done a wonderful job taking what we know of Billy The Kid and using a handful of facts as a springboard for his own story. I did, however, do the research and found out that Billy actually preferred a sombrero to any other hat of the time. Apparently, he was a practical guy and liked the wide brim for more sun protection. I found that provided some interesting insight.


2. What was it about Must that you wanted to make your off-Broadway debut with it?
This play requires a healthy amount of interpretation. Nothing is spoon fed to the audience and the language the playwright uses is very lyrical and poetic. It intrigued me from the get-go and I wanted to be a part of something new and outside the realm of "typical modern theater", for lack of a better phrase.


3. What do you like about living in this wild world of Billy the Kid?
I like the unpredictability. Billy really had to have his head on a swivel in order to maintain the life he desired and much of it was a matter of rolling with the punches.

5. In a lot of ways, this is a play about self-discovery. What do you credit with helping you most understand yourself?
I credit my mother. She instilled in me the need for self-awareness and the courage to explore that which is within me and within us all. I feel that might be why I enjoy story-telling as an actor as well.


6. What do you think happened to Walt after Carrie Diaries?
Great question! I like to believe that Walt grew more confident and accepting of himself with each day he spent in New York City. He probably pursued a job in advertising and grew to be a happy, healthy man. Well, relatively healthy. I have a sneaking suspicion he would have taken up cigarette smoking as everyone did in that time and place.

7. Why do you think Billy the Kid continues to intrigue us in literature, film, art, and music? What about him feels especially timely now?
Well, because we have only fragmented historical documentation and information distorted through legend and folklore, Billy The Kid is a rebel without a cause, seemingly. Or a vigilante, by other interpretations. Just that idea of going against the grain of society has intrigued people for generations. Billy did it in the wrong ways, of course, but that idea of trailblazing is very timely, I feel. The desire to blaze a trail, figuratively or literally, is in all of us, and we can do that without a gun or a sense of vengeance. We can do that armed with joie de vivre.


Don't miss Brendan Dooling as Billy the Kid in Must at off-Broadway's Theatre at St. Clements through November 19.

Must
Best Priced Tickets
Newer
Exclusive! Check Out This Sexy New Teaser for the Hello Again Film
Older
Get a First Look at NYU Tisch New Theatre Production of Little Shop of Horrors