There Are GIF Things We Could Do with the 1994 GREASE Cast Album! 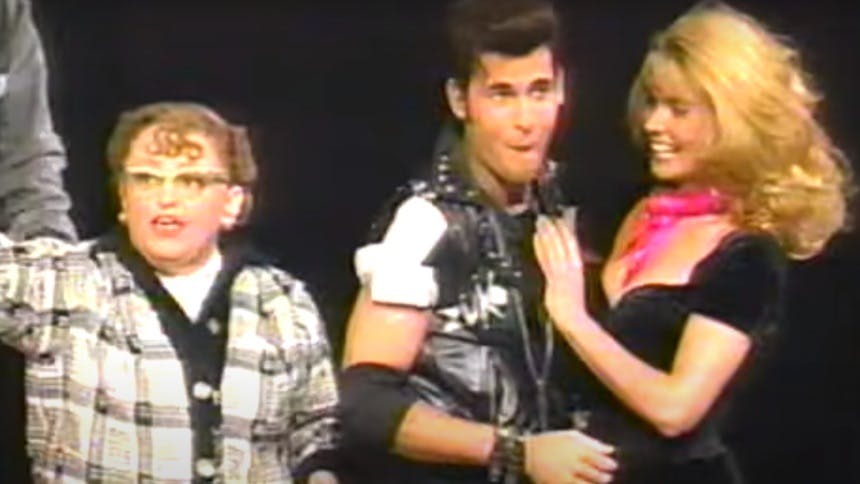 We have the cast album that is going to have you rockin' and rollin' through the week.

The year is 1994, and tonight - May 11, the first Broadway revival of Grease! is opening at the Eugene O'Neill Theatre. The theatre alone was making a bold statement and here's proof. Many of us grew up on the John Travolta/Olivia Newton John VHS tape from 1978 which led to recreating musical numbers in our backyard. Just us? Okay, cool - moving on!

The musical by Warren Casey and Jim Jacobs is slightly different than the film we grew up on with different songs, character names and the like. The revival still had the same structure of Danny and Sandy's love story played here by Ricky Paull Goldin and Susan Wood. What we are absolutely enamored with on this cast album are the orchestrations. John McDaniel, pre-The Rosie O'Donnell Show, served as the musical director working on the vocal and dance arrangements. The show's music was also orchestrated by Steve Margoshes with an assist by Steve Marzullo. What they did with "Beauty School Dropout" - just wait!

Oh! We didn't mention the rest of the cast: the sharp talking Rosie O'Donnell as Rizzo, Billy Porter as Teen Angel singing the aforementioned "Beauty School Dropout," Sam Harris as Doody singing a "Those Magic Changes" that is to be believed, Hunter Foster mooning as Roger and Miss Megan Mullally as Marty in a sassy Broadway debut.


Have a listen to the cast album and follow us track by track expressing ourselves not just with text but with some GIF reactions! "A wop bop-a-loo bop, a wop bam boom!

If you ever needed someone to break down the lyrics to "We Go Together," here's your opportunity. Here's a word you're going to read a lot on this article, ORCHESTRATIONS. They're unreal.

Love them introducing themselves to the audience one at a time. It's serving us Hairspray's "Nicest Kids in Town."

Tell us more, tell us more - but please do fierce choreography while sharing.

If you listen to the original version of this song and then listen to this version - get back to us. Orchestration heaven. It's absolutely bonkers from 3:02 - 4:55: the Seinfeld-like bass guitar riff, Sam Harris singing to the heavens. You're going to want to repeat it. Sam's riff/placement on "more" at 4:39 - incredible.

What a Broadway debut for Megan Mullally! Sass-a-frass! Her voice is killer and The Pink Ladies' background vocal assist is fabulous. But we love all the sass that Megan is serving as Marty.

We don't know half of the car parts they're singing about in this song but we are so envious of the amazing dance arrangements. We can only imagine what this high energy choreo was like though we think it involved neon trimmed tires.

Rosie's Rizzo immediately reminded us of Lucy from Peanuts. Tell it like it is, Rizz!

All the cheerleading, maybe not as many basket tosses, but a good ol' fashioned pep rally tune.

Hunter Foster casually singing about his character Roger's obsession with "mooning." We had to be delicate about this choice! Mr. Duck will do just fine.

C'mon Pink Ladies - why do you have to make fun of poor Sandy?? Remember when you sang backup for her during "Summer Nights."

Listen, we don't get "Hopelessly Devoted To You" in this revival - please refer to 2008. Instead, we get Susan Wood giving you belty soprano realness. Orchestrations for the win again. What happens between 2:06 to the end is a vocal triathalon. You get killer soprano, full belty vibrato and that gorgeous mix. On "love to share," Sandy feels like Sally Brown and so do we listening to this track.

Movie fans are going to be super confused because rather than the end of the show, this song closes the first act. The piano playing! It's a joyride as usual. "Wa-oooo - yeah!" You're dancing in your seat, aren't you?

13. Shakin' at the High School Hop

A fun little Act 2 opener with some tight harmonies. Totally retro and we're in the 1950's with our greasers prepping for the dance.

14. It's Raining on Prom Night

Sandy, Beyonce didn't even go to her prom and you're worrying about rain ruining your mascara? Keep those priorities in check.

Sometimes a gif is just gifted to a person when they're writing an article about Grease. This gif is one of them.

We interrupt this gif review because if you can experience this song on video - it's encouraged.


Billy Porter. We don't even know what else to say. His voice is otherworldly as we know. If we had to pick one track that wins Best Orchestrations, it is this one by a country mile. What a reinvention. 2:32's "you cannot get a jo-o-ob - no!" riff, 3:09's "better" and the "woo's" that follow, and the "high school" at 4:06 - these are a few of our favorite things. Oh Billy Porter, you have our heart always.

Movie fans, you might be looking for Danny Zuko singing "Sandy" right around this time. In its honor, we are featuring the weird hot dog concession advertisement that was running on the film's drive in movie screen scene. Full circle.

A nice little uptempo tune for Doody and Kenickie, Sam Harris and the late great Jason Opsahl. Their vocal range is huge so we love this moment of them singing together.

19. There Are Worse Things I Could Do

Don't cry Rizz, that's the worst thing you could do! Great work on this tune Rosie, you're a Broadway fan and star.

Sandy is about to make a major quick change with some help from Rizzo's makeup case. Sandy has had it!

This is an eight minute journey. Before the finale megamixes were really popular, this is the ultimate Grease Megamix.

We live for the drama in the transition at 0:32 from "Those Magic Changes" to of all songs "Mooning"

You get about 8 more songs from the show and then the musical's "All Choked Up" which was replaced by "You're The One That I Want." Susan's tough girl voice is at 3:04 is another makeover. We love 3:39's "don't make me laugh!"

Billy Porter comes back and serves and his "born to hand jive" riff at 4:54... we don't deserve any of his riffs.

And then we're back to the Grease score as we've always known it with "We Go Together." They even shout the show's title at the end because... why not?! We said this was a journey!