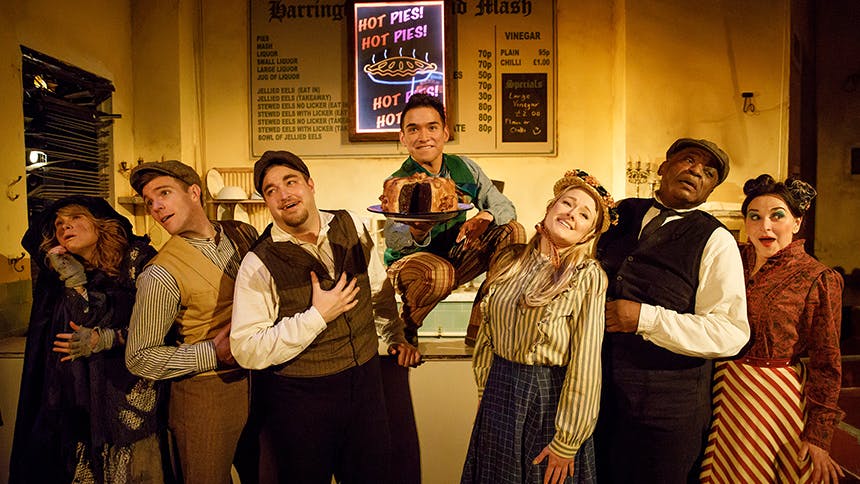 The site specific off-Broadway revival of Sondheim and Wheeler’s masterpiece Sweeney Todd is a critically-acclaimed smash—beloved by New York audiences in the same way it was embraced in London, where the paired-down Tooting Arts Club production began. The musical currently has an entirely new cast bringing the dark, thriller to life just feet away (sometimes less!) from patrons’ faces.


BroadwayBox caught up with the new company to find out from them (like we did with the original company), what was your first experience seeing or hearing the iconic musical Sweeney Todd?


It was 1979 when the original cast album came out, and I went down to Tower Records in San Diego on a Tuesday (because I think that’s the day of the week they released the new cast albums), and I picked up Sweeney Todd. I had read about it and knew it was the new Sondheim show. I took it home to my little apartment on Goshen Avenue, and put it on my record player. And except for putting the second disc on, I don’t think I moved for the next two hours. I sat there and listened to it, completely mesmerized and captivated by this story that was unfolding through my little stereo speakers. Now here I am.


I was in a pop band at the time, so I wasn’t going around buying records called Sweeney Todd. [Laughs] I don’t remember the first time I ever heard it, but the first time I saw it (would you believe) was in this space. The very first time I saw it was right here! My friend Siobhán McCarthy was the original Nellie—I was actually one of her understudies in the original Chess—and Duncan [Smith], who played The Judge, I did Anything Goes with. It was amazing to sit and watch our friends who had come over with this amazing idea. I actually couldn’t watch it very well because the whole time I was thinking, ‘I want to play this part!’ My brain was going mad. The rest is history. New York has taken it under its wing.


For me it was college. We all sat down and watched the George Hern/Angela Lansbury video. For me, it was a lot of my introduction to Sondheim at all, so it was a pretty visceral and memorable experience. I enjoyed re-watching it again once I knew I was coming into this—to enjoy that full-circle, sentimental moment.


I saw a very bad production of it in high school when I was a junior. Nobody should have ever done that. [Laughs] So I am very grateful for this opportunity. When I saw this production, it was like, ‘Ah! That’s what it’s supposed to be!’ So many things were made clear.


It was actually the original company—yes, I am that old. The funny thing is I didn’t like it. The original production was HUGE and there was so much to see and deal with I didn’t always hear the lyrics. I could tell the music was beautiful but I couldn’t quite get it. I was young. I only fell in love with it when I did it some years later. I played the Beadle in 1986. Now I think it’s extraordinary.


I think I saw the movie, and then the first time I saw a full production was in college. It was pretty dope, and there was a lot of fake blood.


I remember it very well. In middle school, I saw a picture in a musical theatre retrospective. It was a guy in what looked like a lab coat cutting another guy’s throat, and I was like, ‘What the hell is that?!’ I was a big horror nerd (even as a little kid) and I got so, so excited. I went out and bought the original picture from the cast album cover—the cartoon of Lansbury and Cariou. I listened to it and it was a Rosetta Stone moment for me. I didn’t know what a musical could be in a lot of ways until I heard that cast album. Then I went out and bought that filmed version of the production, and I made my mom drive me five hours to Toronto to see a production. It honestly became my favorite musical very, very quickly.


I feel like I was introduced to it song by song. Then when I was still in college, I did a production of it in summer stock. We had a week of rehearsal and then I performed it for a week. I was in the ensemble, and it’s the most fun show to be in the ensemble in.

Don't miss your chance to experience this one-of-a-kind 'Sweeney Todd' off-Broadway at the Barrow Street Theatre.