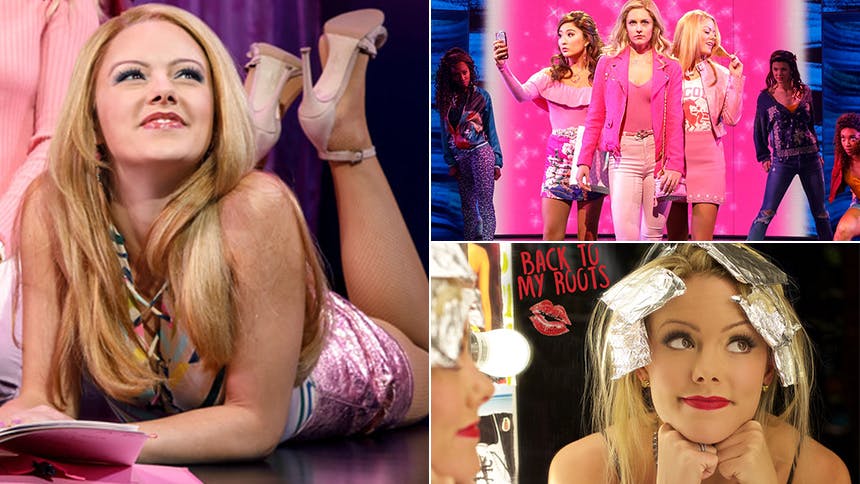 . The alum of Broadway's Rock of Ages, Legally Blonde, and Bring It On enjoys a total showstopper with her clever Halloween number "Sexy" #ImaMouseDuh, but truth be told, she has a LOL moment any time your eye catches her throughout the show.

On April 27, Kate releases her debut solo album Back to My Roots. Produced by Broadway Records, the album features beloved songs from the “second Golden-Age” of Broadway musicals, which inspired Kate to become the Broadway scene-stealer she is today.

Below, BroadwayBox chats with Kate Rockwell about creating Karen Smith for the stage, her lifelong dream of playing Trina or Christine Daaé, and her emotional reaction to first seeing the Mean Girls marquee.

1. Tell me about bringing Karen Smith to stage. How did you begin bringing depth to her? What did Tina Fey or Casey Nicholaw say to help you find who this character is in the musical?
Frankly, I think I know this girl really well. What I love most about the transfer of Karen from the original film to the musical script is that a lot of her material is different. There’s very little carry over from the film. It’s adapted and updated. It’s not just putting the film up on stage. So, I am blessed that if you know the movie and what Amanda Seyfried created with that role, you can take that information and file it away, but I am going to give you an all-new set of information—even though it’s the same character in the same story. I got to live in my own version of Karen and who I know her to be in a way that was unrestricted by Amanda Seyfried. I got to build on top of her work as opposed to having to put myself into her version of it, and that is so cool and so freeing.

2. I feel like Back to My Roots is very much a confession of what a big theatre nerd you were growing up on the second Golden Age. When you were younger, and discovering theatre and your voice, who did you hope to be? Who was giving young Kate her life?
I grew up in Ohio, so I grew up with a lot of cast recordings. My family loved the music that has now informed the album—Andrew Lloyd Webber, Stephen Schwartz, Schonberg & Boublil. That’s what I grew up listening to—it’s what my parents loved and what was available to me. That’s where the majority of my passion lies. I memorized the original cast recording of The Phantom of the Opera—I knew every word and sang every note of every song. My friends and I would sing along to the record in my kitchen. Oh my gosh, Christine was my dream role until I moved to New York and realized no one was going to let me play Christine in Phantom. Even through college it was my dream. Then I moved to New York and learned about different actresses and their careers. Idina Menzel was a big vocal influence for me as I started studying musical theatre. My horizons broadened pretty dramatically.

3. Was it your early love of theatre that made you want to go out for You’re The One That I Want?
I was new to the city and excited at any prospect that would take me a step closer to Broadway. I always knew that’s where I wanted to go. The reality show was a crazy experience and in a lot of ways it molded who I am as a professional—maybe not so much as a creative artist, but definitely as someone who shows up to work every day and knows what I want to be and what I don’t want to be. While I will tell you, I will never do another reality show, it ended up being a good experience for me. It introduced me to a lot of people and forced me out of my comfort zone.
What do you wish you could tell Serious Sandy Kate?
One thing I would tell myself in a lot of situations when I was younger: it’s going to be OK. I was so stressed and worried that every opportunity was the last, and it’s not. Just take a deep breath. It’s all going to be ok.

4. If you could play any of the roles from Back to My Roots in a full production somewhere, which one would you pick?
Trina in Falsettos. It’s one of my dream roles and always has been. My obsession with Bill Finn is that I think he is one of the best at writing real drama. It’s not super heightened drama, it’s real life. The thing that really hooked me about Falsettos is that this was happening around him. The change of family structure, the AIDS epidemic, and the breakout of homosexuality as a cultural norm and not a cultural stigma was literally happening while he was writing the musical. For him to have that kind of perspective on something he was currently living through in the moment is sort of miraculous. Trina is a real person. She is a woman in a failing marriage, dealing with her husband and his new partner and how to raise a child in a divorced home. She learns about opening up again and how to heal from the loss of what you thought your life was going to be. She sings those feelings and she sings big. It’s big, hard, beautiful musical theatre singing. That to me is the perfect role, getting to play a real person but still getting to sing my lungs out every night.

5. So now full circle—from the girl who listened to records with her parents to the woman whose on a billboard in Times Square and buses the city over—what’s the biggest pinch-me moment for you in this whole Mean Girls experience so far?
It’s being on the poster. It’s a first for me. I didn’t know how much I wanted it until it happened for me here. Seeing yourself on the marquee is incredibly emotional. That little kid in you just jumps up and down. I cried on 52nd Street. Myself, Ashley Park, and Erika Henningsen went up together on a lunch break when we heard they put the marquee up. The three of us ran up the 10 blocks, and turned the corner, and immediately all started crying. It was such an incredible thing to look at.