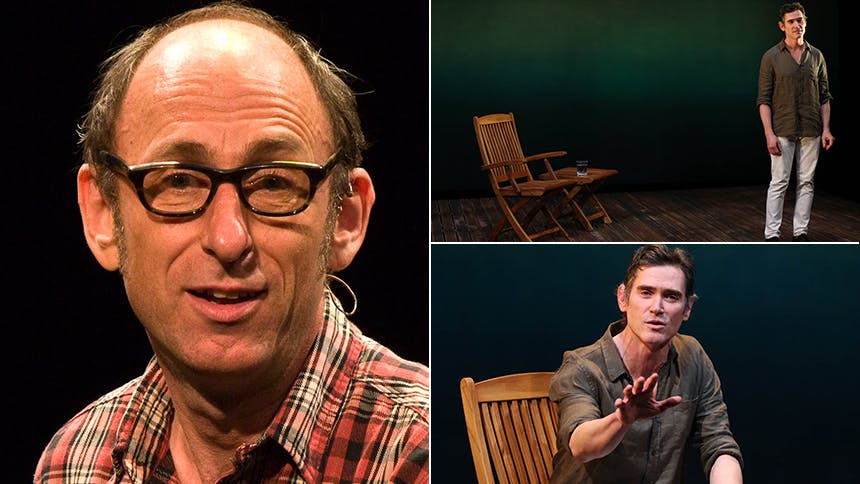 OBIE Award winner David Cale is acclaimed as one of the leading solo performers in America. His latest celebrated solo show, Harry Clarke

, runs off-Broadway and stars Tony winner Billy Crudup in a dark, funny, twisted tale of one man living in New York City. The show has been nominated for a 2018 Lucille Lortel Award for Outstanding Solo Show, and Audible recorded Billy Crudup's performance as an audio play, now available for download. Audible produced the off-Broadway run at the Minetta Lane Theatre which began last year at the Vineyard, and thanks to the audio recording, you don't have to be in NYC to experience the thrilling Harry Clarke.


BroadwayBox caught up with David Cale to discuss creating the piece, bringing Billy Crudup on board, and the pop culture influences that helped inspire the unbelievable story.

1. You pull inspirations from music and film while you write. What inspired this piece that is so full of music and film references?
It was more before I began. I watched a lot of [film] noir and lots of crime movies. It was written very instinctively and intuitively, but I did want to see if I could write a one-person show that had elements of thriller. When I was actually writing it, all the music that is within, was always in the script. Parts of it were written to the music—like his scene in the mirror or the Sade in the bar. That one-sided conversation with the boy Luke in the bar was specifically written to the song—when he speaks it’s very precise. It was almost like a double lyric. I didn’t want to emulate it, but I was very conscious of and I cautiously watched The Talented Mr. Ripley and also Purple Noon. I love them but I was wary of becoming too immersed in them, because I knew I was trotting along the track that had things in common. There was one version of the script where Phillip/Harry goes with Mark and actually sees The Talented Mr. Ripley with Matt Damon but I took that out in the end.

2. That’s so interesting. What else did you take out in the process? Any other big referential moments?
There was a period where one of the original endings was him literally reenacting the last scene of Body Heat, the updated noir with Kathleen Turner and William Hurt. It ends with Kathleen Turner sitting on the beach having gotten away with the crime. So it was the music from the movie and I was going to have him in the deck chair completely reenacting Kathleen Turner, but then I thought only five people will understand the reference so I took it out. He still ends up on a tropical island like Kathleen’s character.


3. Sade is basically a character in the show. Why her?
I immediately wanted Sade. I very much like her. A friend of mine was a music critic for many years (now retired), and I asked him who his favorite person he had ever interviewed was, and he said Sade. He really loved her, and said she was an extraordinary person. So, that doubly endorsed my idea of including her and making her part of the show. There is a movie called Eve or called Eva with Jeanne Moreau where the character’s inner life is all represented by Billie Holiday songs she puts on. That was the original idea of the film but the producers butchered it, but that lingered with me—the idea you can tell what a character is thinking by what music they put on.


4. In what point in the creation of Harry Clarke did you realize you wouldn’t perform this yourself?
I wrote it for myself originally and I performed it at the Andy Warhol Museum in Pittsburgh for three performances, but I didn’t want it to be reviewed. I wanted to try it out and keep it under the radar a bit. I thought it was interesting for me to do something where I said I wasn’t English (because I am English), but then I had a feeling somebody else should perform it. It became more solid to me with someone else. And then we all wanted Billy [Crudup] and he miraculously became available and wanted to do it.

The show came together very, very quickly. It’s the fastest a show has ever come into production at the Vineyard. I got an email at the end of July from Sarah Stern at the Vineyard asking if I had a solo show that could go into production in the fall. I sent three scripts, and about 10 days later, I got an email asking I could meet that day. Sarah had loved the script and sent it to Audible—who wanted to start a place in the theatre as producers and recording pieces—and they loved it. By the end of August, it was rolling. Miraculously Leigh Silverman was available to direct. Then Billy, who wasn’t available, two weeks before we were starting suddenly became available. Two weeks before rehearsals began, we didn’t have an actor.


5. What do you love about Billy as a performer and Billy in this piece?
He really is a live performer. There’s nothing like being in the room with him. He’s different every night—different things peak out differently by the night. One of the great things about Billy is that he’s a great stage actor but also a great movie actor. He has that movie magnetism. His face can really morph, and it’s funny to watch sometimes because it almost looks like a special effect. I don’t know how he does it. I feel like I got the best of both worlds. The performance is so full-strength Billy. It’s really dazzling what he’s doing.


6. What was it like to watch Billy record this piece for Audible?
I was at the recording. The thing about it was too that we recorded it during the Vineyard run. Billy was in great shape performing wise so the performance was really, incredibly nuanced and realized. Because he’s used to being in a recording studio doing voice over stuff, he was in his element. He was in such performing shape during the recording. You just don’t get that kind of opportunity to be at the end of a run and go into the studio so fresh. His voice records really well.

7. Who did you look to when you were starting out writing solo pieces? Who was doing interesting work that was inspiring you?
Initially many, many years ago, the person who got me performing was Bette Midler. I saw her in the late ‘70s and the way she effected the audience and me in the audience—it became my ambition to try to do that. I started off as a singer. Then I wrote songs that segued into monologues, and then the person that influenced me most was Laurie Anderson.